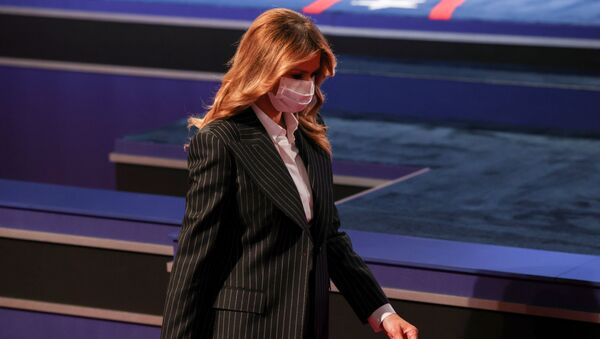 Oleg Burunov
All materialsWrite to the author
On Tuesday, the US Justice Department sued the first lady’s former friend and aide Stephanie Winston Wolkoff, claiming that she had violated a nondisclosure agreement by publishing a tell-all memoir about her time serving at the White House.

US First Lady Melania Trump has lashed out at Stephanie Winston Wolkoff, describing her former aide and friend as a person of “dishonest behavior” who “only cares” about her “personal agenda”.

In a piece published on the White House website on Friday, the first lady berated US mainstream media for “eagerly” covering “salacious claims made by a former contractor who advised my office”.

Melania Trump dubbed Wolkoff a woman, “who said she ‘made me’ even though she hardly knew me, and someone who clung to me after my husband won the Presidency”.

“This is a woman who secretly recorded our phone calls, releasing portions from me that were out of context, then wrote a book of idle gossip trying to distort my character. Her ‘memoir’ included blaming me for her ailing health from an accident she had long ago, and for bad news coverage that she brought upon herself and others. […] These kinds of people only care about their personal agenda—not about helping others”, Melania stressed.

She blamed media outlets for looking to “focus their coverage on pettiness over my positive work”, referring to “plenty of opportunists out there who only care about themselves, and unfortunately seek to self-aggrandize by knowingly taking advantage of my goodwill”.

The remarks come a few days after the US Justice Department lodged a lawsuit against Wolkoff, claiming that she had violated a nondisclosure agreement by publishing a tell-all memoir about her time working at the White House and that she should hand over all of her book’s profits to a government trust.

The memoir titled "Melania and Me: The Rise and Fall of My Friendship with The First Lady” was released in September and focused, in particular, on Wolkoff planning President Donald Trump's 2017 inauguration and advising the first lady in the first year of the Trump administration.

The first lady’s friend left the White House in 2018 after reports claimed that her company had been paid almost $26 million for her work on Trump’s inauguration.

Daniels, a 41-year-old pornographic actress and film director, claimed during Donald Trump’s presidential campaign in 2016 that she had had an affair with the future president a decade earlier, when his wife Melania had just given birth to their son Barron.

Daniels also publicly revealed that she was paid hush money to remain silent on the issue, but the Trump team denied that the actual affair took place.