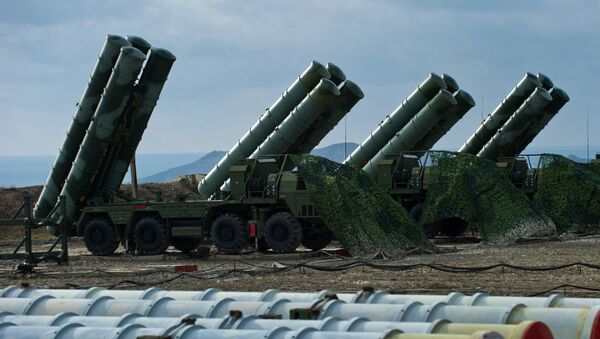 © Sputnik / Sergey Malgavko
/
Go to the photo bank
Subscribe
Henry Batyaev
All materialsWrite to the author
Earlier in the day, a video began circulating in Turkish media showing what appears to be the trail of a missile launch in the city of Sinop, which was thought to be the result of an S-400 air defence system test. Ankara previously announced plans to hold firing exercises in the region between 13 and 17 October.

Washington has already expressed its protest to the Turkish authorities over the test launch and warned about the "potential serious consequences" of the move, Ortagus added.

Turkish media reported earlier in the day that the military had kicked off the testing of Russian-made S-400 air defence systems as part of drills near the Black Sea town of Sinop.

Footage showing a test-fired missile was published by Turkey’s military M5 magazine, which noted that "the first firing of S-400 systems was conducted in Sinop". Earlier, the country issued airspace and maritime advisories in connection with the firing exercises in the region from 13-17 October.

Turkey issued the so-called NOTAM air space notice to restrict an area near its Black Sea coastal city of Sinop ahead of possible tests of the Russian-made S-400 missile system. The NOTAM followed a NAVTEX maritime notice by Turkey restricting airspace off its Black Sea coast to allow S-400 tests, which NAVTEX said were due to be held between Friday and Saturday.

This came after a convoy of military vehicles transported S-400 components to the Sinop province.

Moscow and Ankara signed a loan agreement on the delivery of S-400 systems in December 2017. In 2019, Turkey received several S-400 battalions worth $2.5 billion.

Turkey's cooperation with Russia on the matter has been strongly criticised by NATO and the United States, which have cited security concerns relating to the S-400s alleged incompatibility with NATO's air defence systems.

000000
Popular comments
Protest...american dogs are truely shameless
chrrev
16 October 2020, 19:13 GMT15
000000
Who cares what they condemn, Turkey's a sovereign country and thus has the right to buy any weapons system for it's own defense.