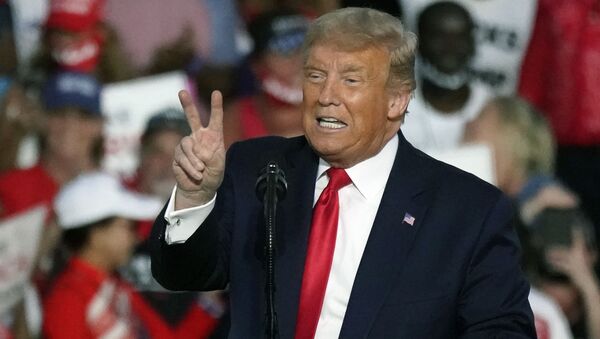 James Tweedie
All materialsWrite to the author
The Trafalgar Group, a Republican consulting firm, was one of the only pollsters to correctly predict Trump's 2016 wins in the swing states of Pennsylvania, Michigan, Wisconsin, Florida and North Carolina.

US President Donald Trump has a narrow lead in the key battleground state of Michigan - according to the polling firm that predicted his victory in 2016.

The Trafalgar Group,  gave Trump 46.5 per cent of the vote to Democratic rival Joe Biden's 45.9 per cent on Friday

Libertarian candidate Jo Jorgensen had 2.5 per cent support in the poll of 1025 respondents conducted Sunday and Wednesday this week. the Green Party's Howie Hawkins was on 1.5 per cent and 2 per cent remained undecided with less than three weeks to go to the election.

Women voters, far fewer of whom voted for Trump than did men in 2016, were over-represented in the sample, by 54 per cent to 46. Those in the 45-64 age group which turned out heavily in 2016 were also slightly over-represented.

Earlier on Friday Trump tweeted that polling figures looked good for him and predicted a "red wave" on November 3, despite most pollsters predicting a landslide for Biden.

Trump has seen turnouts in the thousands at his election rallies this week, while those for Biden have struggled to attract attendances in the hundreds.

One of the industrialised midwestern "Rustbelt" states, Michigan has a hefty 16 votes in the electoral college which picks the next president, with the winner taking all the electors towards the target of 270.

Only ‘Chicanery' at Polls May Upset My Election Victory, Biden Claims
​In 2016 Trump became the first Republican candidate to win Michigan since George H W Bush in 1988.

Biden leads Trump by a ten-point margin in national polls - although with most states 'safe' for either the Republican or Democratic party those surveys mean little.