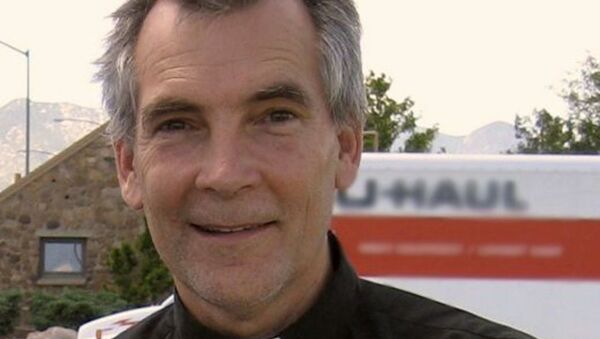 © Twitter/Steve Dear
Subscribe
Evan Craighead
All materialsWrite to the author
A 71-year-old Roman Catholic priest will spend virtually no additional time behind bars after he was granted time served during sentencing for his April 2018 break-in at a nuclear-capable US Navy submarine base in Georgia.

However, Kelly was granted 30 months of time served and, under federal law, has accrued 108 days of “good time credit” for the two and a half years he has spent behind bars.

The 71-year-old has been held in Brunswick county jail since his arrest in April 2018.

“Father Kelly, it has been clear to me you are sincere in your beliefs,” Wood said on Thursday. “However, I would be remiss to discount the nature of the offense that we’re looking at today and the risk to safety that you knowingly undertook.”

The Associated Press reported that Kelly and six other activists - known as the Kings Bay Plowshares 7 - were convicted of trespassing, destruction of property and other charges associated with their April 4, 2018, storming of the Kings Bay Naval Base, which houses submarines armed with hundreds of nuclear weapons.

The activists allegedly recorded videos of themselves using wire cutters to bypass a locked security gate at Kings Bay. They then spray-painted “anti-nuclear messages and hammered on an outdoor display,” AP reported.

During pre-sentencing, the priest referred to himself as a “prisoner of conscience for Christ” and one who preaches against “the sin that flourishes in weapons of mass destruction,” RNS reported.

“I answer to a higher authority in that my faith imperative, as outlined in the tenets of the Catechism, missions me to respond to the needs of the poor, oppressed, disenfranchised, in any locality and without any exclusion to those with felony record,” said Kelly in a statement to the judge.

“He’s a fearless person,” Patrick O’Neill, one of the Kings Bay Plowshares 7, said to RNS. “He’s not burdened by the normal self-constraints of most of us. He’s very driven in his effort to save the world from its own hand.”

Kelly’s sentencing followed the handing of a 17-month sentence to fellow activist Elizabeth McAlister, who was freed after the decision in June on account of time served. O’Neill was sentenced to 14 months in prison on Friday.

The other four activists have yet to be sentenced.

000000
Popular comments
This priest should never have been jailed , he is a brave whistle blower .