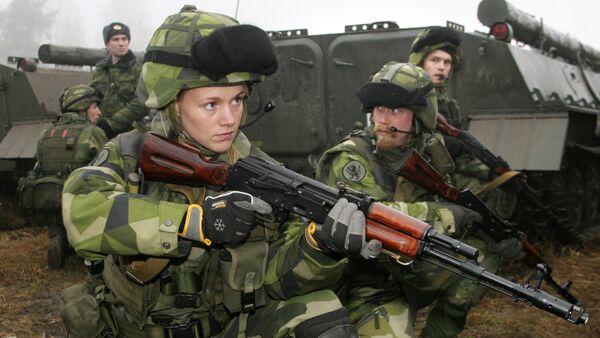 © AFP 2021 / ALEXANDER DROZDOV / INTERPRESS
Subscribe
Igor Kuznetsov
All materials
The Swedish Armed Forces have in recent years been betting on diversity, inclusivity, and equality, embracing mottos like "Our strength consists of differences", "Come as you are", and "We don't always march straight". Increasing the share of women is seen as another important milestone in "breaking up the male monopoly".

Despite numerous initiatives including costly ads and awareness-raising campaigns, the Swedish Armed Forces have failed to meet this year's goal of having at least 20 percent of its conscripts be women.

While some units in the Air Force and the Navy have effectively met the target, the Armed Forces in general is lagging behind.

Despite the announced goals of making the army gender equal, the pace of change is rather sluggish, as men generally tend to be more interested in taking up a military career – which the Swedish Armed Forces regard as a problem.

"If we fail to get access to the 100 percent of the population that we possibly could, we risk losing competence. They do not seem to be attracted as much by the army and we think this is due to a slightly incorrect picture of what reality looks like", Jenny Ström, commander and the head of the Armed Forces' recruitment section, told Swedish Radio.

The long-term goal of the Swedish Armed Forces is for women to constitute at least 30 percent of conscripts by 2025. To meet it in the current circumstances, the military is considering changing enlistment requirements, Swedish Radio reported. The military is also looking at ways to increase motivation among women. In doing so, the armed forces have increased their outreach programme, sending 30 former conscripts to schools to try and attract girls to the services.

"Above all, I think that many have a very stereotypical image of the armed forces, that it is very rough and tough and with a hard jargon. Many believe that it is a business where only big strong men fit into the template", former conscript Sofia Berglund told Swedish Radio.

The Swedish Armed Forces have in recent years been betting on diversity, inclusivity, and equality, embracing mottos like "Our strength consists of differences", "Come as you are", and "We don't always march straight". To signal its commitment to the LGBT cause, the Swedish military has become a dutiful participant in Pride parades, hoisting rainbow flags. Increasing the share of women is seen as another important milestone in "breaking up the male monopoly".

"How can one of the world's most equal countries have a defence force where just under a fifth are women? This is indefensible. Our work to become more like the country we defend continues. An equal defence is a stronger defence", the armed forces wrote on Facebook.

This push includes revising the physical standards to include more women, which many defence experts have slammed as a move that will weaken the forces overall.

Since the end of the Cold War, the Swedish Armed Forces have been gradually reshaped from a major force able to handle an invasion to one centred mostly on international efforts. In lockstep with this trend, the military budget has shrunk from 2.4 percent of GDP in 1990 to merely 1 percent in 2018, and the number of troops has dropped from 180,000 in the late 1980s to some 20,000 today. In recent years, however, the trend has been reversed, amid a return of the draft and a re-militarisation of the key Island of Gotland in the Baltic Sea.