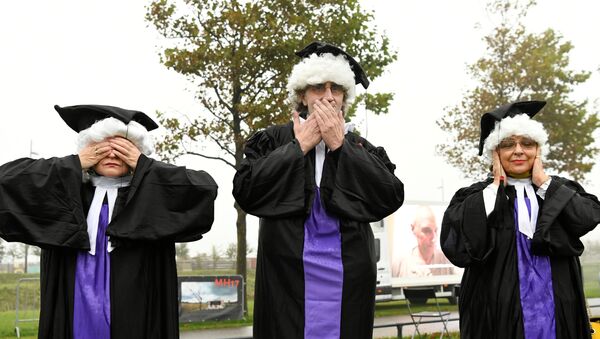 © REUTERS / Piroschka van de Wouw
Subscribe
MOSCOW (Sputnik) - The Hague is the only one to blame for derailing consultations of Russia, Australia and the Netherlands on the MH17 plane crash over eastern Ukraine, the Russian Foreign Ministry said Thursday.

"Therefore, the Hague carries full responsibility for the collapse of the trilateral consultations," the ministry said.

The ministry further noted that it finds it impossible to further participate in trilateral consultations with Australia and the Netherlands on the deadly MH17 crash after the Dutch lawsuit filed against Russia with the European Court of Human Rights (ECHR).

"The Hague has chosen another option, without even waiting for interim results of the consultations — while only three rounds were held. It filed an interstate complaint against Russia with the ECHR. Such unfriendly steps by the Netherlands make the continuation of the trilateral consultations meaningless, as well as our participation," the Russian Foreign Ministry said.

"As we remain committed to the provisions of the United Nations Security Council's Resolution 2166, we intend to continue cooperation with competent authorities in the Netherlands, including for discussing Ukraine's failure to close its airspace for civilian aircraft flights over the Donbas armed conflict area. However, we will be doing it in other formats," the ministry went on to say.

Moscow once again slammed the MH17 probe by the Netherlands and the Dutch-led Joint Investigation Team as "biased, superficial and politicized."

"Russia has informed us of its unilateral decision to stop consultations on MH17. The Netherlands deeply regrets this decision by Russia," Blok said.

In July, the Netherlands filed a lawsuit against Russia with the ECHR over the country's alleged role in the deadly incident, which left almost 300 people killed back in 2014.

In its fresh statement, the Russian Foreign Ministry qualified the step "as another blow on the Russian-Dutch relations, and The Hague's demonstration of its firm intention to continue the vicious policy of unilaterally putting on Russia the blame for what happened in the skies over Donbas, in defiance of common sense."

The aircraft was downed over eastern Ukraine on 17 July 2014 as the self-proclaimed republics in the region were engulfed in an armed conflict with the new government following a violent coup in Kiev earlier that year. All 298 passengers – mostly Dutch citizens – and crew on board died in the crash.

The accident is being investigated by Dutch prosecutors and JIT (Joint Investigation Team), who claim that the plane was hit by a Buk missile that belonged to the Russian Armed Forces.

MH17 Hearing Postponed Until 3 November
Moscow has repeatedly denied any involvement in the incident and has called the JIT investigation biased, because Russia's evidence showing the plane had been shot down by a Ukrainian Buk missile, proven with radar data, has been ignored by investigators. At the same time, Ukraine has failed to provide any primary radar data, saying that "the radar was not operating at that moment".

Moreover, leaked documents from the Dutch Military Intelligence and Security Service (MIVD) showed that Ukrainian missile systems were installed closer to the scene of the incident than any Russian ones, with the plane being out of their range.

In 2018, JIT released a report claiming the missile that shot down MH17 was launched by DPR forces and that the Buk launcher had been delivered from Russia. Moscow stated that the probe was politically motivated, and noting the team had based its claims on unverified social media photos and videos, as well as assertions by the Ukrainian government.

000000
Popular comments
Whoever was responsible for the shoot down (Ukraine), it was not an accident and should never be described as such. It was shot down on purpose and with forethought for Geopolitical Power and Corruption considerations.

Thraxite
15 October 2020, 12:56 GMT6
000000
Imagine a US Commercial airliner crashing in the Ukraine......and that the US Federal Aviation Administration was not not only barred from leading the investigation, but not even being allowed to participate or even have access to the evidence and data collected..... as Malaysia's Aviation Authority was barred from not only participating in the MH-17 investigation but even to access to the case materials collected by the "investigators". This whole investigation was/is not only a farce, but deliberately fabricated event evidenced on the actions of the Dutch et al.