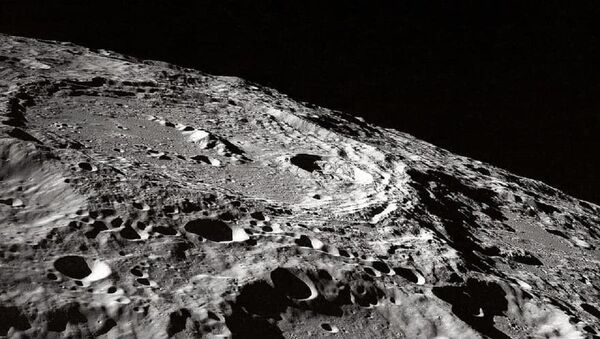 CC0 / /
Subscribe
Max Gorbachev
All materialsWrite to the author
Some 4.5 billion years ago, our planet was a drastically different place – an uninhabitable world with extremely hot temperatures, toxic air, and pounded with radiation coming from the Sun in the form of flares and coronal mass ejections. Scientists believe everything changed with the formation of the Moon.

The Earth and the Moon once had a joint magnetic field that acted as a shield against solar wind particles, says a new study conducted by an international team of scientists led by NASA. For a long time, scientists believed that the Moon didn’t have a long-lasting magnetic field due to the small size of its core. According to the findings of the study, published on 14 October in the journal Science Advances, by using new technology, NASA researchers analysed samples of the lunar surface that were collected during the Apollo missions and sealed for decades. The study showed that the heat during the Moon’s formation kept its iron flowing, which in turn generated a magnetic field, although it did not last long because of the core’s size.

"It’s like baking a cake: You take it out of the oven, and it’s still cooling off. The bigger the mass, the longer it takes to cool off", said Jim Green, NASA’s chief scientist and lead author of the new study.

In its early days, the Moon was a lot closer to the Earth, but over the years moved away due to gravity. The researchers created a computer model to see how the magnetic fields of the Earth and Moon interacted with each other. The simulation showed that the magnetospheres of both celestial bodies were connected in the polar regions of each object.

Scientists believe that this so-called shield played an important role in the evolution of Earth as it did not allow solar wind particles to strip away our planet’s atmosphere. The researchers calculated that the joint magnetosphere of the Earth and Moon persisted from 4.1 to 3.5 billion years ago. Over time, the Moon’s interior cooled off and the Earth’s satellite eventually lost its magnetosphere and atmosphere. Scientists say the Moon’s magnetic field weakened significantly 3.2 billion years ago before vanishing about 1.5 billion years ago.

According to NASA, which plans to establish a sustainable human presence on the Moon as part of its Artemis programme, the new study suggests that other moons may have helped their host planets preserve their atmospheres and potentially contributed to habitable conditions on these planets.

The new research will also help scientists to better understand the evolution of the Earth’s satellite.

"Understanding the history of the Moon's magnetic field helps us understand not only possible early atmospheres, but how the lunar interior evolved”, said David Draper, NASA’s deputy chief scientist and study co-author. "It tells us about what the Moon's core could have been like -- probably a combination of both liquid and solid metal at some point in its history -- and that is a very important piece of the puzzle for how the Moon works on the inside".

000000
Popular comments
Surely more important is.. who placed the moon into such an orbit and position to give perfect eclipses, tides etc. and how does the Moon that needs some form of adjustments to stay so. manage that? We seem to have a hollowed out/constructed Planet. Even nasa scientists, when they used to tell the truth,were curious.. search. ''YouTube. The Moon is Not Real: David Icke (No Music)''
TommyT
15 October 2020, 17:17 GMT
000000
"In its early days, the Moon was a lot closer to the Earth, but over the years moved away due to gravity. " Wouldn't gravity pull the moon closer? Aren't you talking about centripetal force? And here I believed the moon was moving away because it had too much velocity to stay in orbit.
Porky
17 October 2020, 21:25 GMT
000000
Newsfeed
0
New firstOld first
loader
LIVE
Заголовок открываемого материала
Access to the chat has been blocked for violating the rules . You will be able to participate again through:∞. If you do not agree with the blocking, please use the feedback form
The discussion is closed. You can participate in the discussion within 24 hours after the publication of the article.
To participate in the discussion
log in or register
loader
Chats
Заголовок открываемого материала
Worldwide
InternationalEnglishEnglishMundoEspañolSpanish
Europe
DeutschlandDeutschGermanFranceFrançaisFrenchΕλλάδαΕλληνικάGreekItaliaItalianoItalianČeská republikaČeštinaCzechPolskaPolskiPolishСрбиjаСрпскиSerbianLatvijaLatviešuLatvianLietuvaLietuviųLithuanianMoldovaMoldoveneascăMoldavianБеларусьБеларускiBelarusian
Transcaucasia
ԱրմենիաՀայերենArmenianАҧсныАҧсышәалаAbkhazХуссар ИрыстонИронауОssetianსაქართველოქართულიGeorgianAzərbaycanАzərbaycancaAzerbaijani
Middle East
Sputnik عربيArabicArabicTürkiyeTürkçeTurkishSputnik ایرانPersianPersianSputnik افغانستانDariDari
Central Asia
ҚазақстанҚазақ тіліKazakhКыргызстанКыргызчаKyrgyzOʻzbekistonЎзбекчаUzbekТоҷикистонТоҷикӣTajik
East & Southeast Asia
Việt NamTiếng ViệtVietnamese日本日本語Japanese俄罗斯卫星通讯社中文（简体）Chinese (simplified)俄罗斯卫星通讯社中文（繁体）Chinese (traditional)
South America
BrasilPortuguêsPortuguese
NewsfeedBreaking
19:47 GMTPrince Andrew Has a Week to Challenge Court Ruling to Serve Papers Amid Procedure Disagreements
19:43 GMTFDA Panel Votes Against Offering Pfizer Booster Shots for COVID-19 to Most Americans
19:37 GMTFrance Recalls Ambassadors From US, Australia for Consultations over AUKUS Alliance
19:34 GMTUS Prosecutors Reportedly Plan to Charge Ex-Boeing Employee for Concealing Truth About 737 MAX
19:28 GMTAlt-Right Proud Boys Warn Members to Avoid 'Trap' of Washington DC Rally
19:18 GMTTrump Sends Letter to Top Georgia Officials Demanding to End 'Illegitimate' Biden's Presidency
19:18 GMTTaliban Reportedly Ditches Women's Ministry in Favour of 'Ministry of Virtue and Vice'
19:09 GMTUS Gen. McKenzie Admits Kabul Airstrike 'Was a Mistake', Killed Only Afghan Civilians
19:07 GMTPresident Trump’s Dismissal of Bill Barr’s Warnings Cost Him Presidency, Book Claims
19:03 GMTDeSantis Slams Biden for ‘Dramatically’ Seizing Florida’s COVID-19 Treatment
19:00 GMTWH Reportedly Plans to Launch 'Deportation Flights' to Haiti as Texas Migrant Crisis Worsens
18:50 GMTKiwi Cricket Team Could Have Been Attacked, New Zealand PM Ardern Told Pakistan PM Khan
18:41 GMTAlexandria Ocasio-Cortez Hit With Second Ethics Complaint For 'Tax The Rich' Appearance at Met Gala
18:02 GMTOver 40 Palestinians Injured in Clashes With Israeli Military in West Bank, Red Crescent Says
17:40 GMTPayPal Allows UK Clients to Buy, Hold, Sell Cryptocurrencies
17:30 GMT'Perfectly Within Duties': Gen. Milley Defends Secret Talks With China on Possibility of US Attack
17:21 GMTCapitol Police Chief Warns of Threats Ahead of Rally in Support of Protesters Charged in 6 Jan. Riot
17:06 GMTBoris's Johnson: PM Cracks Joke About his Fertility at Post-Reshuffle Cabinet Meeting
16:23 GMTTikTok Bans Hashtag Linked to Cyberbullying of French Students Born in 2010, Reports Say
16:21 GMTUS Defence Secretary Approves Request to Deploy 100 Troops at Capitol Protest