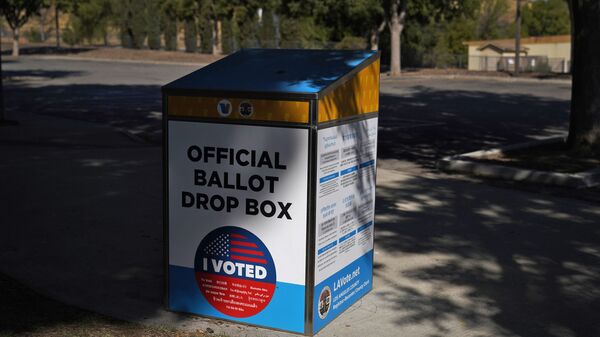 Oleg Burunov
All materialsWrite to the author
On Monday, California Attorney General Xavier Becerra along with California Secretary of State Alex Padilla, both Democrats, demanded that Republicans provide a list of voters whose ballots have been collected using the "unauthorised" boxes.

California Republican Party general counsel Tom Hiltachk has made it plain that they will not remove unofficial ballot drop boxes from several local counties as more than 1.5 million vote-by-mail ballots have already been cast in the Golden State.

Hiltachk said on Wednesday that the boxes were installed in line with California's "ballot harvesting" law, which typically allows volunteers to collect ballots from voters and return them to a county's election offices so that they can be counted. The practice is illegal in a spate of US states.

"The fact that it is a box does not make it illegal. If we have to use a bag, then we'll use a bag", he pointed out, adding that this year, all of the party's drop boxes are indoors either at county party headquarters, churches, or retailers.

The general counsel insisted that the boxes are locked and monitored by party supporters, berating "perhaps an overzealous volunteer" for mislabeling some drop boxes as "official". According to him, none of the boxes currently carry those labels. 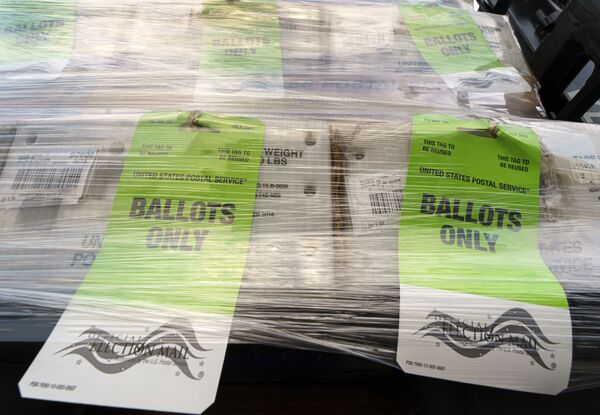 Pallets of voting ballots are ready for mailing to the United States Postal Service as they are displayed to the media at the Orange County Registrar of Voters, before a news conference on Orange County's comprehensive plans to safeguard the election and provide transparency in Santa Ana, Calif., Monday, Oct. 5, 2020
© AP Photo / Damian Dovarganes

Becerra, as well as California Secretary of State Alex Padilla, called on Republicans to provide a list of voters whose ballots had been obtained with the help of what Padilla described as the "unauthorised" boxes.

These are "a disservice to state and local election administrators who have spent months working on the placement and deployment of official ballot drop boxes", the California Secretary of State told reporters on Monday.

Michigan's Top Election Official Says Mail-in Votes Could Take a Week to Count
Padilla stressed that only county election officials are authorised to set up drop boxes, adding, "operating unofficial ballot drop boxes — especially those misrepresented as official drop boxes — is not just misleading to voters, it's a violation of state law".

He was echoed by Becerra who expressed hope that "the message goes out loud and clear to anyone who is trying to improperly solicit, obtain, and manage a citizen's vote that they are subject to prosecution".

"I'm trying to be careful with how I say this, but the reports we are hearing are disturbing", the California Attorney General said, in an apparent reference to information about unofficial ballot boxes being installed in Fresno, Los Angeles, and Orange counties.

The boxes in question were reportedly placed in churches, candidate headquarters, and "local political party offices", presumably of the California Republican Party.

The developments came as US President Donald Trump went on Twitter to call on California's GOP to defy threats of prosecution from the state's officials.

"You mean only Democrats are allowed to do this? But haven't the Dems been doing this for years? See you in court. Fight hard Republicans!", POTUS tweeted on Tuesday.

In separate development, the US president has repeatedly claimed that widespread mail-in voting could result in significant election fraud, pointing to recent problems in local elections in New York and New Jersey. The Democrats rejected POTUS' claims as unfounded.