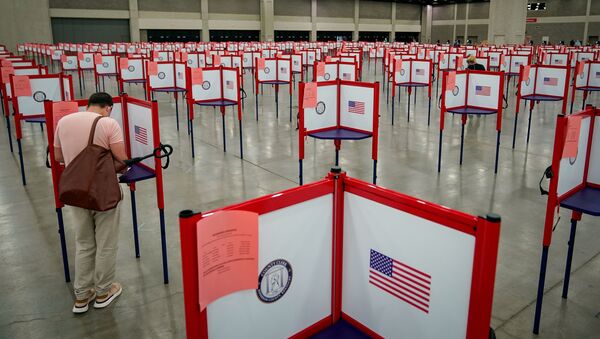 The 3rd of November is Election Day in the United States when Republican presidential nominee and incumbent president, Donald Trump and Democratic presidential nominee, ex-Vice President Joe Biden will be contending for the most prestigious office in the country.

In-person early voting in several states started in September, and on Thursday, it also kicks off in North Carolina, with Washington, Louisiana, New Mexico, Nevada, and Massachusets joining in the next few days.

Following a fiery first round debate, subsequent debates between the candidates, Donald Trump and Joe Biden, were cancelled amid the pandemic, as POTUS was diagnosed with coronavirus. Instead, both candidates will be present at two separate major events, that will be simultaneously braodcast on TV on Thursday night: Trump will participate in an NBC News town hall in Miami, while Biden will take part in an ABC News town hall in Philadelphia.

According to data from the US Election Project, more than 14 million Americans have cast their votes so far.

Democratic nominee Joe Biden said that, if victorious on Election Day, he will eliminate a fraction of his predecessor’s tax cuts that benefited "the top one tenth of one percent."

"When I said about the Trump tax cuts about $1.3 trillion of the $2 trillion in these tax cuts went to the top one tenth of one percent. That’s what I am talking about eliminating, not all the tax cuts that are all out there," Biden said during a televised town hall event.

Biden also said he would establish a group compries of law enforcement, sociual workers and minoritries to look into communcity policing.

US President Donald Trump said during a town hall meeting that state-wide lockdown imposed by several US governors to curb the spread of the novel coronavirus (COVID-19) is unconstitutional.

"The fact is we're winning all these cases because it's unconstitutional what they're doing and I think they're doing it for political reasons," Trump said.

Trump also said his opinion on wearing masks has not changed after contracting COVID-19.

The US president added that he has been okay with wether people wear masks or not.

MOSCOW (Sputnik) - The campaign spokesman for US Democratic presidential candidate Joe Biden has refuted media reports that the politician had held a meeting with Vadym Pozharskyi, an adviser to the board of Ukrainian energy company Burisma.

"We have reviewed Joe Biden's official schedules from the time and no meeting, as alleged by the New York Post, ever took place", Andrew Bates said, as quoted by Politico.

Trump Urges Biden to Reveal All Info on His Involvement in Family Business Amid NY Post Bombshell
06:21 GMT 15.10.2020