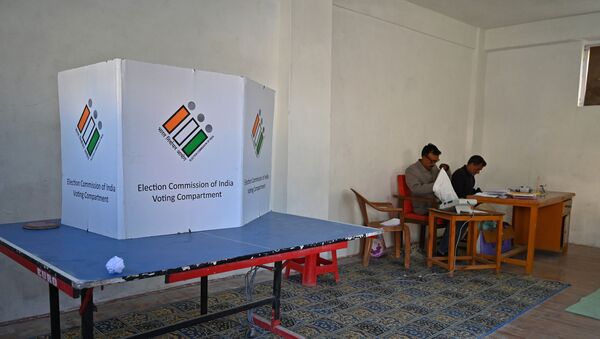 Shweta Sharma
Sputnik correspondent
All materialsWrite to the author
The Bharatiya Janata Party (BJP) has been leaving no stone unturned to grab power in Jammu and Kashmir, which is heading to the polls to elect a new state assembly. However, with the main political parties boycotting the elections, the BJP will remain untested in the absence of strong opponents, according to experts.

One of the main BJP opponents and former chief minister of Jammu and Kashmir, Mehbooba Mufti, was released from detention on Tuesday. She was kept under house arrest for more than a year after she protested the federal government’s move in August 2019 to strip Jammu and Kashmir of its special status, which had given the local government considerable autonomy.

Immediately after her release, Mufti announced she would fight against the “black decision taken on a black day” by New Delhi, while calling the scrapping of the special status an “insult to Kashmiris”.

Mufti, along with other local leaders resisting the constitutional changes made on 5 August last year, have mounted challenges to the federal government, which is hoping to conduct assembly elections either by the end of 2020 or the beginning of 2021. Mufti’s predecessor and National Conference (NC) leader Omar Abdullah also announced his decision to boycott the assembly elections.

Kashmir-based author and journalist Gowhar Geelani, who has been closely monitoring the situation in Jammu and Kashmir, is of the opinion that conducting elections with mainstream political parties like the National Conference (NC) and the People’s Democratic Party (PDP) boycotting them would be a huge dent to the Modi government’s claim of normalcy in Jammu and Kashmir.

“If the elections happen, and BJP still contests it amid boycott calls, that would be a smokescreen for the people and what credibility would it have? It's like going to the exam yourself and saying that I stood first because no one else participated”, says Geelani.

World
Will Terrorist Killings of Party Workers Undermine India's Ruling BJP Ahead of Elections in Kashmir?
Apart from Mehbooba Mufti and Omar Abdullah, other top political figures, including former Chief Minister Farooq Abdullah, who were among the hundreds of leaders, activists, and lawyers detained on the intervening night of 4-5 August 2019 have now been released.

Local parties have unanimously decided to keep complying with the Gupkar Declaration - a joint statement signed by six major political parties to collectively fight against the abrogation of semi-autonomy. These developments are expected to have a tremendous impact on shaping the immediate political discourse, with demands rife for a reversal of the special status.

It was nice of you & Farooq sahab to come home. It gave me courage listening to him. Im sure together we all can change things for the better. https://t.co/48yc39Wjhb

​“Election will have no legitimacy when all political parties like NC and PDP will boycott the elections. It is going to be a mockery in the international community because it will look like an orchestrated exercise”, Geelani told Sputnik.

India’s governing BJP came to power for the first time in Jammu and Kashmir by cobbling up a coalition with Mehbooba Mufti’s People's Democratic Party (PDP) in the 2014 assembly elections, in which none of the parties managed to get a simple majority.

However, the coalition later crumbled due to differences over power-sharing, following which presidential rule was imposed on the state. It was during the course of the president’s rule that the BJP-led federal government decided to repeal the constitutional provisions that ensured special status to Jammu and Kashmir.

"A polling exercise in such scenario will not be democratic, moral or have any political significance. It will be again seen as aggression", underscored Geelani.

Meanwhile, the political dynamics are further being reshaped by the federal government with a decision to begin the delimitation (redrawing of boundaries) of electoral constituencies.

It is expected to increase the number of assembly seats for the Hindu-majority Jammu region. In the erstwhile Jammu and Kashmir state assembly, the Kashmir Valley, with a population of around seven million, had 46 seats, while Jammu had 37 seats with over 5.3 million in population.