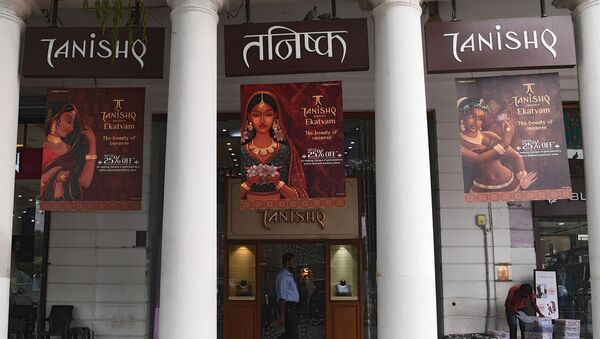 Advitya Bahl
All materialsWrite to the author
Tanishq, a jewellery brand owned by the Tata Group of companies, has pulled its advertisement after huge backlash over the content showing a Hindu bride being pampered by her Muslim mother-in-law.

An ad campaign by Tanishq jewellery has opened up a can of worms, with a group of people attacking the brand's outlet at Gandhidham in Gurajat, Indian Prime Minister Narendra Modi's home state.

#BoycottTanishq has been trending on Twitter as trolls have lashed out at the brand for promoting interfaith marriages.

Police in Gujarat's Gandhidham said that a mob attacked the brand's outlet on Tuesday alleging that the advertisement, featuring a Hindu bride married into a Muslim household, had deeply hurt Hindu sentiments.

"The store manager was made to write sorry for hurting Hindu sentiments. We have increased the patrolling in the area", the officials said.

Protesters allege that the advertisement, which has already been pulled, indirectly promotes "Love Jihad" – a term used by Hindu nationalists who think that Muslims have been marrying Hindu girls with the purpose of change the nation's demography.

"She is married into a family that loves her like their own child. Only for her, they go out of their way to celebrate an occasion that they usually don't. A beautiful confluence of two different religions, traditions, and cultures", read the ad caption, posted on Tanishq's YouTube Channel.

​Meanwhile, a formal complaint has been lodged against Tanishq with the Advertising Standards Council of India for allegedly hurting communal sentiments.

Tanishq has over 320 stores in 200 cities across India. It was the highest-grossing brand in the sector during the last financial year.