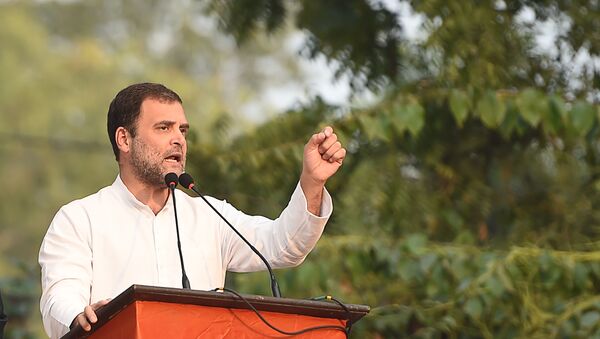 © AFP 2021 / MONEY SHARMA
Subscribe
Dhairya Maheshwari
All materials
India posted its worst economic contraction on record in the April-June quarter of this year, with gross domestic product (GDP) contracting by a massive 23.9 percent year-on-year basis during the period.

"Solid achievement of BJP's hate-filled cultural nationalism. Bangladesh set to overtake India", he said in a morning tweet on Wednesday.

The revealing statistics are part of the International Monetary Fund (IMF)'s World Economic Outlook (WEO), published on its website on Tuesday.

According to analysis of the IMF data, India will be left as the third-poorest country in South Asia, with only Pakistan and Nepal posting worse GDP per capita numbers. Bangladesh, Bhutan, Sri Lanka, and the Maldives will be better off than India this year, as per the report.

The IMF didn't release the data for Pakistan for the year.

However, the IMF's outlook has predicted a "sharp economic recovery" for India next year, which will see the South Asian powerhouse re-gaining its GDP per capita lead over Bangladesh.

Gandhi's political attack on Indian Prime Minister Modi also found resonance among the public, with many of his supporters reminding the PM that India's per capita income five years ago was 40 percent more than Bangladesh's.

If it's Modi it is possible, India set to slip below Bangladesh in '20 per capita GDP.

Do remember our GDP was 40 percent higher than Bangladesh's, only five years ago.

Dr Manmohan Singh had rightly said in January, 2014, Modi as a PM would be a DISASTER. pic.twitter.com/SlK0vXwrYU

Modi has now made India slip below Bangladesh in per capita income.

We were warned by DrMMS in January 2014:
"It will be disastrous FOR THE COUNTRY, to have Narendra Modi as PM" pic.twitter.com/kIRgYQopHI

000000
Popular comments
I am not surprised. Spending billions on expensive military toys, and wanting to be the top dog in Asia is not cheap, its a very expensive thing. Watch out you do not go bust and become the poor dog of Asia.