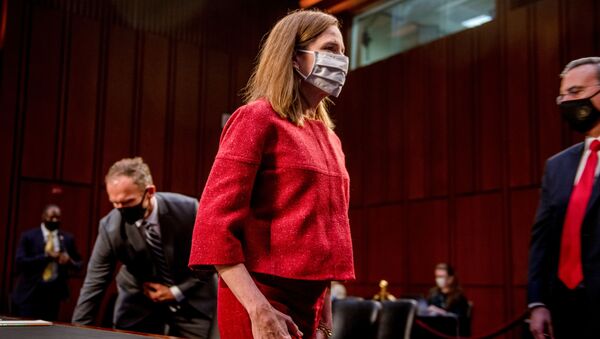 Last month, President Trump nominated Amy Coney Barrett for the vacancy on the Supreme Court left by late Justice Ruth Bader Ginsburg. The move was criticised by the Democratic Party, with its presidential nominee Joe Biden urging the Senate not to confirm any Supreme Court candidate until after the 3 November election.

A live broadcast from outside the US Senate in Washington DC as the third day of the confirmation hearings for US President Donald Trump's nominee for Associate Justice of the US Supreme Court Amy Coney Barrett begins.

The procedure, which kicked off on Monday, is set to last four days, during which Barrett faces questions from Democrats and Republicans, some of whom will participate via video-conference due to the coronavirus pandemic.

Trump's move to replace the late Associate Justice Ruth Bader Ginsburg before the presidential election, scheduled for 3 November, has provoked much criticism from the Democrats. They insist that no confirmation should take place until after the elections, remembering that the last president, Barack Obama, was prevented from making a nomination when Antonin Scalia, another Supreme Court judge, died before that year's presidential election in 2016.