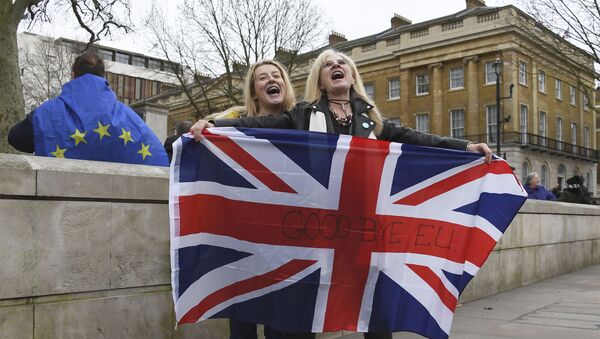 © AP Photo / Alberto Pezzali
Subscribe
The Organisation for Economic Cooperation and Development (OECD) has urged Britain’s government to conclude a free trade agreement with the European Union to support the recovery from the coronavirus pandemic.

These efforts from the OECD come as Boris Johnson and Ursula Von Der Leyen meet ahead of Thursday’s EU summit and Johnson’s October 15th deal deadline. With more on this story, Sputnik spoke to the Analyst Michael Swadling from the Croydon Constitutionalists, in this interview.

Sputnik: Can we expect the Prime Minister, and ultimately the EU, to stick to the October 15th deadline ahead of Thursday's summit?

Michael Swadling: Don't think the EU will. They've never indicated that they respect the British people or the decision we made on Brexit. They don't really respect our negotiators or sovereignty and I don't see them respecting deadlines being set by our Prime Minister - so they're not going to.

Boris, maybe. I don't have a great deal of faith that at this time Boris means what he says. At one point, maybe, he seemed to be holding out, he seemed to take quite a strong line; but at the moment this government is not functioning like the government we thought we were electing.

All negotiations with the EU always get an answer at the last minute. It's always the 11th hour or indeed maybe the 12th or more. So, it's always last minute with the EU, I don't see this being any different.

Sputnik: What is the likelihood of an agreement being drawn up at this stage in the next 24 hours or so?

Michael Swadling: There are no good deals to be had with someone that doesn't treat you as an equal. The EU regards us frankly as a renegade province. They don't regard us as a sovereign state. They've been absolutely clear about that throughout the entire process.

If the government had any gumption at any point during these negotiations, they would have walked out at the point, the EU first demanded access to our sovereign territory be it land or sea. Had we walked away at that point and said, frankly, you're clowns; you're not negotiating from a sensible position; you're not treating us as equals, then we would have had a chance of forcing them into a deal because they realise they're not dealing with a renegade province - they're dealing with Great Britain an independent nation.

They don't seem to realise that I don't see how we resolve that until we do walk away and get to WTO terms. My greatest fear is that the government signs a god-awful deal like the withdrawal agreement was, that holds us in some sort of perpetual vassal state situation with the EU.

That will be the worst outcome. Our one real hope is to walk away on WTO terms and then I think we might actually get it. Once we broken off and we continue to thrive as a nation, and we do, once we've walked away, they then may finally see that we are a sovereign nation and we could negotiate something Canada+ deal.

Sputnik: Looking beyond the Thursday’s deadline, what areas does Britain’s government need to concentrate on, to safeguard and ensure that Brexit is a success for the UK?

Clarity is so important in business, it's so important in negotiations with other countries, and on a practical note, we just need to know what rules we're going to have our ports and elsewhere in the nation. So, that's a really straightforward point. In terms of long-term building, we've had a huge shock to the economy due to the lockdown as a result Covid. We need to get out of that as quickly as possible and we need to give people the opportunity to start rebuilding their businesses. Sweden's had it.

European Council President Compares UK's Boris Johnson to the Joker in Brexit Negotiations
Much of Europe are now having fans back at sports events, other countries are coming out. Our terrible government response, and frankly our even worse set of ideas from the opposition, is holding us back. We need to get out as quick as possible and then beyond that, we've got a great opportunity to build some great trading relationships around the world - build on what we've already got.

Let's keep pushing forward with free trade deals, get the free ports that the government has promised in place as quickly as possible, and really get out of people's way. British people have proven for hundreds of years to be incredibly enterprising and indeed most people throughout the world are.

If the government just gets out the way; reduces regulation, reduces taxes, and lets people thrive themselves... the sooner they can get the EU out of the way and then get themselves out of the way, we will do very well; thank you very much.