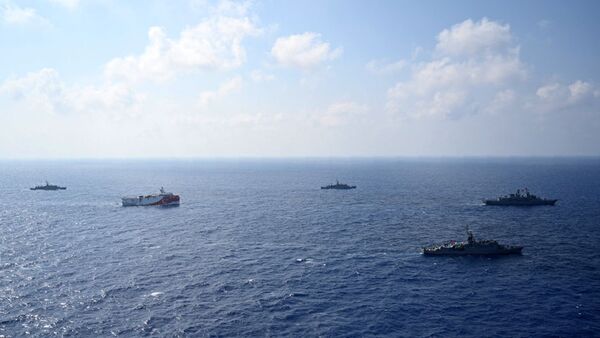 © AP Photo / Turkish Defense Ministry
Subscribe
Ilya Tsukanov
All materialsWrite to the author
On Sunday, Ankara announced that its Oruc Reis research ship would return to disputed waters in the eastern Mediterranean Sea for more surveying work. Greece, Germany and France slammed the decision, with Berlin calling on Turkey to refrain from any “provocations”, and Athens accusing Ankara of breaking its commitments.

The United States voiced its displeasure over Turkey’s decision to return the Oruc Reis to disputed waters in the Mediterranean on Tuesday, calling on Ankara to put an immediate halt to what it described as a “calculated provocation".

“Turkey’s announcement unilaterally raises tensions in the region and deliberately complicates the resumption of crucial exploratory talks between our NATO Allies Greece and Turkey. Coercion, threats, intimidation and military activity will not resolve tensions in the eastern Mediterranean. We urge Turkey to end this calculated provocation and immediately begin exploratory talks with Greece,” Ortagus added.

The Oruc Reis set sail for more seismic surveying activity on Monday, with Greek authorities slamming Ankara for the “major escalation”, and accusing Turkey of posing a “direct threat to regional peace and security”.

The Greek side says the Oruc Reis will be carrying out activities within the Greek continental shelf and only 6.5 nautical miles from Greek shores. Turkey says the survey work off the Greek island of Kastellorizo will be taking place less than 2 km from Turkey’s coast, and that islands so close to Turkey “cannot have a continental shelf”.

Berlin expressed solidarity with its Greek allies earlier Tuesday, with Foreign Minister Heiko Maas calling on Turkey to “end the interplay between détente and provocation if the Government is interested in talks.” The French Government similarly urged Turkey to show restraint, saying Paris expects Ankara to “meet its commitments, abstain from new provocations and show concrete evidence of good faith.”

Germany Warns Ankara Against 'Provocation' in East Med as Turkish Survey Ship Sets Sail
The renewed surveying work damps hopes that Turkey and Greece could resolve the conflict via negotiations. Last week, for the first time since the gas dispute flared up in August, Turkish Foreign Minister Mevlut Cavusoglu and his Greek counterpart Nikos Dendias met in Bratislava, with Turkey setting a date for further talks on exploratory rights in the area.

Tensions between Turkey and Greece over drilling rights in the eastern Mediterranean Sea began in early August, when the Oruc Reis started searching for gas in a maritime area claimed by Greece. Ankara sent the ship to the area shortly after Greece and Egypt signed a maritime agreement dividing large swathes of the Mediterranean between them into exclusive economic zones. The Greek-Egyptian agreement followed the signature of a similar treaty by Turkey and the Ankara-backed government in western Libya in late 2019, with that treaty also making an EEZ claim to large areas of the Mediterranean.

The gas dispute between Ankara and Athens brought the two NATO allies to the brink of armed clashes, with the countries deploying warships, submarines and aircraft to contested areas, both in the Mediterranean and in the Aegean Sea. The spat also prompted France to send military forces to the region to conduct drills with Greek and Cypriot forces, a move which Ankara slammed as a sign of the “colonialist mentality” of French President Emmanuel Macron. US troops have since held drills with both Greece and Turkey.