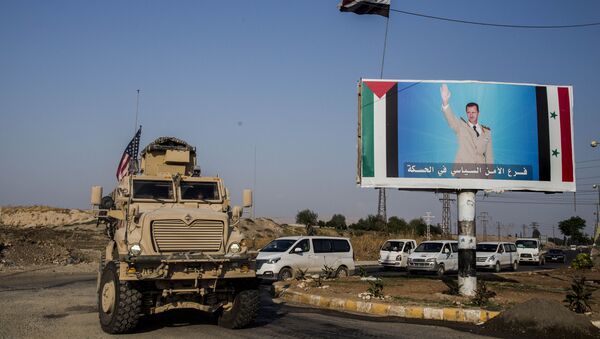 © AP Photo / Baderkhan Ahmad
Subscribe
Ilya Tsukanov
All materialsWrite to the author
In October 2019, President Trump pulled US forces in Syria back from the Turkish border, redeploying them to the oil-rich regions of Hasakah and Deir ez-Zor. Soon after, Russian intelligence revealed that the Pentagon, the CIA, contractors and Kurdish militias were shipping tens of millions of dollars-worth of stolen crude out of Syria every month.

The US military is setting up a new military base in the Badia Desert town of al-Baghuz, Deir ez-Zor, just 1-2 kilometers from the border with Iraq along the Euphrates River, a Sputnik Arabic correspondent has reported, citing local sources.

Work on the base is said to have begun last week, with the first steps including the construction of a helipad to secure logistics. Sputnik’s sources have also said that Kurdish-majority Syrian Democratic Forces (SDF) militants were deployed to the area around the base on Monday for guard duty.

The US has already established three illegal bases in Syria’s Deir ez-Zor province, including near the al-Omar oil field and the Koniko gas plant, as well as the administrative border between the provinces of Deir ez-Zor and Raqqa. 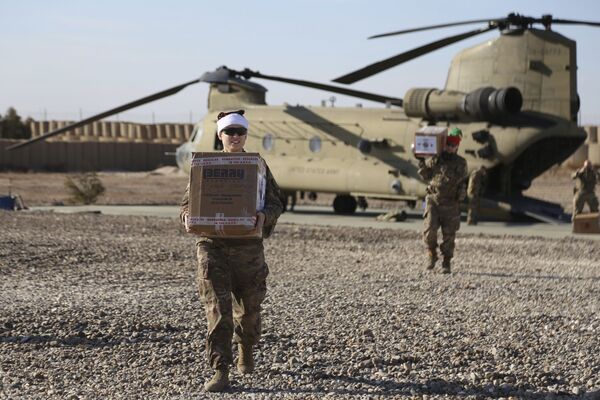 In this Tuesday, Dec. 24, 2019, photo, U.S. service members deliver Christmas gifts to their comrades on a base near the al-Omar oilfield in eastern Syria.
© AP Photo / Farid Abdul-Wahid

In related news, tribal sources in Deir ez-Zor’s countryside told Sputnik Arabic that US troops and SDF militiamen have carried out three days-worth of raids on civilian homes in the Arab-majority tribal towns of Theban, al-Hawaij, al-Busirah and al-Shuhail, arresting over 50 people

Over the weekend, Hasakah residents told the Syrian Arab News Agency (SANA) that a convoy of 20 tankers laden with oil left the US and SDF-occupied region of Jazira, heading for the illegal Al-Waleed border crossing point between Syria and Iraq. Last month, 35 more tankers slipped across the border.

On Saturday, a SANA correspondent also reported that US forces had reinforced their positions in Hasakaha city amid tensions with local residents.

Home to the vast majority of Syria’s oil and gas resources, Hasakah and Deir ez-Zor have become hotspots for tensions between the Syrian government, pro-Damascus locals, the SDF and US forces, and Turkey-backed militias.

Black Gold: Who Controls Syria’s Oil, and How Much is It All Worth?
Before the foreign-backed civil war began in 2011, Syria was able to use its modest oil resources to secure energy self-sufficiently and to generate roughly 20 percent of the state’s revenues via exports. Pointing to the massive amounts of money that will be required to rebuild from the conflict, Damascus has accused Washington of deliberately seeking to “hinder the efforts of the state aimed at the reconstruction of what was destroyed by terrorism supported mainly by the US administration itself”.

President Trump has repeatedly announced that Washington would be “keeping” Syria’s oil resources, despite concerns that such actions may violate international laws against pillaging. In October 2019, the Russian military released a detailed intelligence report on US oil smuggling activities, accusing the Pentagon, private contractors, the CIA, Kurdish militias and American energy concerns of shipping as much as $30 million-worth of oil out of the country every month.