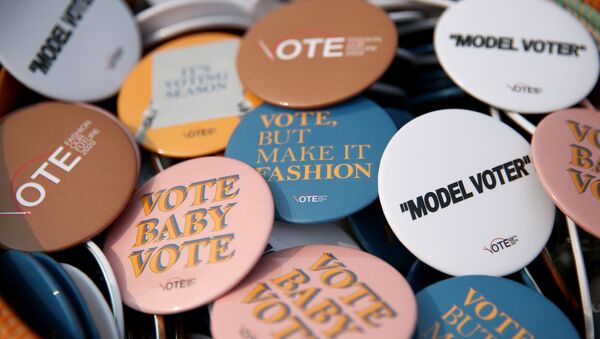 The 3d of November is Election Day in the United States, with Republican presidential nominee and incumbent President Donald Trump and Democratic presidential hopeful Joe Biden expected to go head to head for the White House.

In-person early voting started in a few more US states on 12 October, with just three weeks left before the presidential elections in the country.

According to data released on Monday, US voters have cast a total of 10,296,180 ballots in the reporting states, with Florida, Virginia and Michigan in the lead (over 1.6 million votes, over 977,000 votes and more than 965,000 votes, respectively).

Several organizations including the advocacy group Protect Democracy asked the US Supreme Court to extend the state of Wisconsin's mail-in ballot receipt deadline for the November election, court documents revealed.

"We JUST filed an emergency application to the #SupremeCourt, asking #SCOTUS to reinstate essential relief in #Wisconsin that would extend the ballot receipt deadline and allow citizens from anywhere in the state to fill impending poll worker shortages," the Protect Democracy group said in a tweet accompanying the court filing on Tuesday.

White American Christians continue to back President Donald Trump’s bid for a second term in office, albeit with support that has slipped since a mid-summer survey, the PEW Research Center said in a poll on Tuesday.

“Among White Catholic voters, Trump is ahead of Biden by 8 percentage points: 52 percent in this group say they would vote for Trump (or lean that way) if the election were held today, while 44 percent favor Biden,” a press release explaining the poll said.

US Representatives Don Beyer, Gerry Connolly and Jennifer Wexton called for a court order to extend a voter registration deadline by 72 hours in their native Virginia to offset disruptions of the state’s Department of Elections website on Tuesday.

"The shutdown of Virginia’s online voter registration threatens to prevent many Virginians from casting their ballots in the 2020 election," Democratic lawmakers said in a statement. "It is imperative that the deadline for Virginians to register to vote be extended. We hope the courts will swiftly grant such an extension."

Biden leads with a 49-46 percent margin among all registered voters, with the former vice president’s lead increasing to 4 points in a high turnout scenario and shrinking to 1 percent if voter participation is low, the release said.

"There has been some shifting within the electorate but the overall picture remains the same – another tight presidential contest in North Carolina. Basically, it looks like Trump has been locking in his base at the expense of swing voter support," Monmouth University Polling Institute Director Patrick Murray said in a press release explaining the poll.

The previous Monmouth poll taken in September had Biden ahead by two points.

Each of the last three presidential elections were decided by fewer than four percentage points in North Carolina, the release added. Trump won the state in 2016 with a 3.7 percent margin. Both campaigns are concentrating on so called battleground states such as North Carolina, Pennsylvania, Michigan, Florida, Wisconsin and Ohio, crucial to obtaining the 270 electoral votes needed to win.

Biden is up 2.7% in North Carolina on average in the most recent six surveys posted on Realcleapolitics.com (RCP), which includes Tuesday's Monmouth poll. The former vice president is ahead by more than 10% in the RCP average, and leads in 8 of the top ten largest swing states. However, Biden's lead in four of those 8 states is within a typical margin of error range.

Electoral votes are allocated to individual states based on their representation in Congress, a system that makes it possible for a candidate to win the presidency without winning the nationwide popular vote, as with Trump’s 2016 victory.

The US military has not received any requests for the National Guard to be used to ensure security during the upcoming November presidential election, Army Secretary Ryan McCarthy said in a press briefing on Tuesday

"There have been no requests from other agencies to support at this time," McCarthy said in response to a question whether he anticipated the National Guard to play any role in ensuring the security of the November election.

McCarthy also said "we are always available to support the Metro police department or other federal agencies."

New York Police Reportedly Urge Officers to Get Set for New Protests Ahead of Election
12:48 GMT 13.10.2020