Trump Working Behind Scenes to Reach Nuclear Accord With Russia Before Election, Reports Say 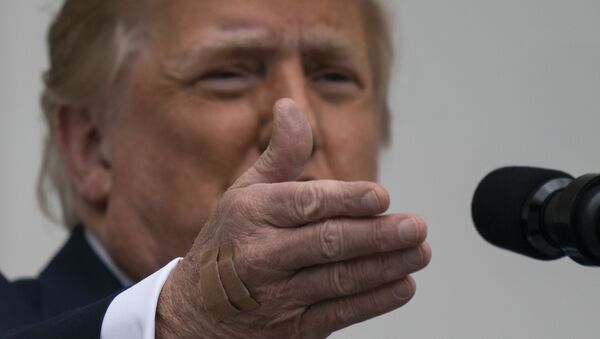 © AP Photo / Alex Brandon
Subscribe
MOSCOW (Sputnik) - A tight circle of people in the administration of US President Donald Trump is engaged in talks to close a nuclear accord with Russia before the 3 November presidential election, the Axios news portal reported on Monday, citing an administration official.

According to Axios, citing a Trump administration source, talks have been ongoing within a tight circle of people at the highest levels in the US National Security Council and the Department of State with briefings provided to a few members of the US Senate's Foreign Relations Committee and a national security working group in the Congress.

The New START extension has been endorsed by Russian President Vladimir Putin and former US vice president Joe Biden, who is Trump's contender in the election. Trump, in turn, has sought to draft a new deal that would involve not only Russia but also China, the owner of the world's third largest nuclear stockpile.

The US administration now tries to craft a deal in a language that both Moscow and Beijing could live with, Axios said, citing a knowledgeable source.

Last week, media reported, citing sources, that the United States and Russia had reached an agreement in principle to continue curbing their nuclear arsenals, which would potentially lead to an extension of their only remaining arms control agreement, the New START, during October. Commenting on the matter to Sputnik, Russian Deputy Foreign Minister Sergey Ryabkov denied that the sides had overcome the differences in their stances to the point anyhow signaling a soon agreement.

China has repeatedly stressed its opposition to considering any trilateral nuclear arms control pacts with Russia and the US.

After the US unilaterally withdrew from the 1987 Intermediate-Range Nuclear Forces with Russia last year, the New START remained the only remaining legally binding agreement on nuclear arms control between the two countries owning the world's two largest nuclear stockpiles. The treaty has been in force since 2011 and is due to expire in February 2021 with a possibility to be renewed for another five years.

The New START limits the number of nuclear warheads over permitted 700 delivery systems to 1,500, with each heavy bomber equipped for nuclear armaments counting as one warhead toward this limit, and the number of deployed and non-deployed launchers to 800. It also provides for 18 on-site inspections annually for mutual oversight purposes.

000000
Popular comments
Fat chance Donald: remove trade sanctions against Russia & maybe: on second thoughts If Putin is smart , he will talk. That will send Democrats into spasms & lose Donald the elections anyway

Sy.Gunson. NZ
12 October 2020, 10:31 GMT
000000
Trump in the State of mind he is in, he willing to take any task to promise on any agreements and treaties with Russia for political reasons, air he wing , same will be “canned again”. He has become an Unstable and disconcerted in these last moves wit Russia, Europe , Iran and China.
Normpich
12 October 2020, 10:35 GMT
000000
Newsfeed
0
New firstOld first
loader
LIVE
Заголовок открываемого материала
Access to the chat has been blocked for violating the rules . You will be able to participate again through:∞. If you do not agree with the blocking, please use the feedback form
The discussion is closed. You can participate in the discussion within 24 hours after the publication of the article.
To participate in the discussion
log in or register
loader
Chats
Заголовок открываемого материала
Worldwide
InternationalEnglishEnglishMundoEspañolSpanish
Europe
DeutschlandDeutschGermanFranceFrançaisFrenchΕλλάδαΕλληνικάGreekItaliaItalianoItalianČeská republikaČeštinaCzechPolskaPolskiPolishСрбиjаСрпскиSerbianLatvijaLatviešuLatvianLietuvaLietuviųLithuanianMoldovaMoldoveneascăMoldavianБеларусьБеларускiBelarusian
Transcaucasia
ԱրմենիաՀայերենArmenianАҧсныАҧсышәалаAbkhazХуссар ИрыстонИронауОssetianსაქართველოქართულიGeorgianAzərbaycanАzərbaycancaAzerbaijani
Middle East
Sputnik عربيArabicArabicTürkiyeTürkçeTurkishSputnik ایرانPersianPersianSputnik افغانستانDariDari
Central Asia
ҚазақстанҚазақ тіліKazakhКыргызстанКыргызчаKyrgyzOʻzbekistonЎзбекчаUzbekТоҷикистонТоҷикӣTajik
East & Southeast Asia
Việt NamTiếng ViệtVietnamese日本日本語Japanese中国中文Chinese
South America
BrasilPortuguêsPortuguese
NewsfeedBreaking
12:04 GMTTeen With Lego Gun Triggers Police Operation in German Town
12:01 GMTMachete-Wielding Man Injures Four People in Canada's Calgary
11:38 GMTRussian Deputy Prime Minister Not Ruling Out Repetition of Energy Crisis in Europe
11:24 GMTNorth Korean Website Slams 'Squid Game' as Showing 'Hell-Like Horror Where Only Money Matters'
11:07 GMTDeath Toll From Kandahar Mosque Bombing Rises to 63
11:02 GMTFrench Politician: US Has Moral and Legal Obligation to Unblock Afghan Assets & Let the Nation Be
10:59 GMT‘Killed Serving the People’: UK Media Shows Rare Display of Cross-Party Unity in Tribute to Dead MP
10:50 GMTIs Russia in Danger of Running Out of Gold Deposits?
09:08 GMTUS-Greek Bases Pact Signals Bid to Pressure Turkey, Dominate East Mediterranean
09:02 GMTAustrians Invited to Presidential Palace for COVID-19 Shots
09:00 GMTNASA's Lucy Mission Blasts Off to Examine Trojan Asteroids
09:00 GMTPremier League: Five Biggest Games of Matchweek Eight
08:55 GMTUK Police Ordered to Immediately Review MPs' Security Arrangements After Fatal David Amess Stabbing
08:30 GMTSeveral Dead and Dozens Injured: What Was Behind Thursday's Bloody Events in Lebanon?
07:33 GMTISS Crew Was Woken Up by Siren at Night
07:16 GMTAnother Day, Another Blunder: Psaki to ‘Choose Words More Carefully’ After Ethics Watchdog Complaint
07:12 GMTNetflix Fires Organiser of Trans Employee Walkout for Leaking Internal Documents, Reports Say
06:08 GMTFour Indian Paramilitary Personnel Injured in Blast at Raipur Railway Station
05:59 GMTBiden Admits He Will Have to 'Build Back Better' With Less, Is ‘Not Going to Get $3.5 Trillion’
05:45 GMT‘Sensational’ Remains Buried by Ancient Vesuvius Eruption Discovered at Herculaneum