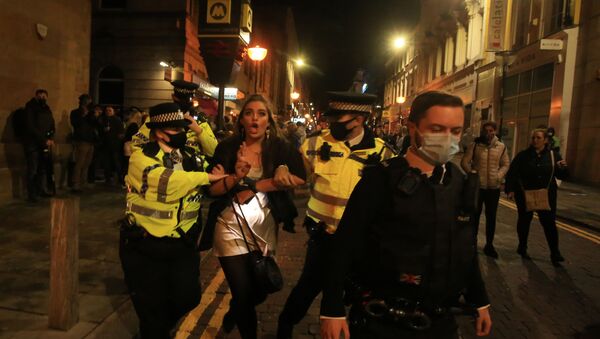 © AFP 2021 / LINDSEY PARNABY
Subscribe
Svetlana Ekimenko
All materialsWrite to the author
Earlier reports said northern UK mayors were riled up over the proposed new lockdown measures, which they believe would see their areas, which are currently experiencing a dramatic surge in coronavirus cases, automatically falling under the strictest protocols, entailing the shutting down of pubs, restaurants and other hospitality businesses.

UK Prime Minister Boris Johnson is expected to launch the implementation of a new three-tier system of local lockdowns today that has already alienated leaders in North England, amid a surge in coronavirus cases across the country, writes The Times.

Johnson, who briefed cabinet ministers on the issue last night, is expected to begin by finalising the new measures to tackle the spread of the pandemic at a meeting of the Cobra emergency committee. 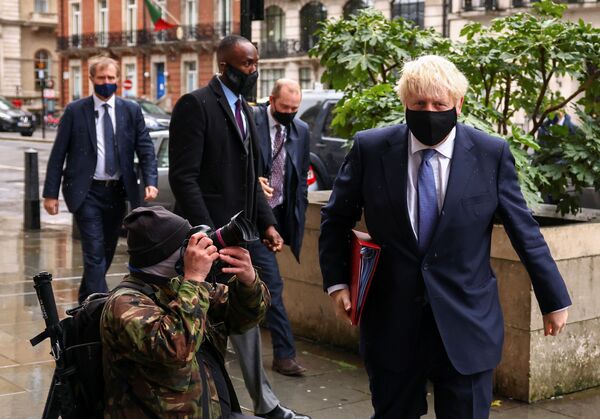 Afterwards, the Prime Minister will make a statement in the House of Commons, followed up by a televised press conference at approximately 6 p.m. together with Chancellor Rishi Sunak and Chris Whitty, the chief medical officer for England.

Subsequently, MPs will be debating and voting on the proposed measures.

The three-tier system was earlier proposed by the Prime Minister as a set of new measures that would vary from one area of the UK to another, reflecting the COVID-19 infection rates in that particular part of the country. However, Northern cities such as Manchester, Newcastle, and Liverpool are expected to see the most serious restrictions, as they have been the hardest-hit amid the current flare-up of the pandemic.

The policy risks posing a strategic threat to Conservative-held seats in northern England, which had been a Labour party stronghold until last year, when many voters changed sides to support Brexit during the country's parliamentary elections.

The strictest of the three alert levels - “very high” - is believed to entail the shutting down of pubs, bars, casinos and gyms.

According to a cited cabinet source, focus is being made on closing “drinking-led” establishments, with restaurants permitted to stay open. However, other reports the previous night suggested the latter may be allowed to offer only takeaway meals.

It is believed that the strictest measures will be set in place for a span of four weeks at a time, with a follow-up review of the coronavirus situation. Regional leaders will be able to augment these measures with their own, writes the outlet.

Other protocols suggested as part of the “very high” alert level are curbs on households mixing and guidance against making non-essential trips outside the local area, with work- and school-related travel still be permitted.

The first “medium” tier of the new coronavirus lockdown, expected to apply to areas with a relatively low infection level, would presuppose nationwide restrictions such as a curfew on pubs from six o'clock to ten o'clock in the evening.

The second, “high” tier, could see more social distancing restrictions, including a ban on households meeting, which already exists in local lockdowns. Tier three is set to apply to major hotspots.

This last fact has set Northern leaders on the “warpath”, as they fear the “draconian clampdown” would result in large parts of the virus-hit North-West and North-East automatically falling under Tier 3.

The shutting down of pubs, restaurants and other hospitality businesses was slammed by regional leaders as potentially transforming the North of the country into a “permanent open prison”.

Thus, Liverpool, regarded currently as the worst coronavirus hotspot due to its high rate of COVID-19 -related hospital admissions, is expected to fall into the highest alert category today.

Other struggling areas such as Greater Manchester and Lancashire are expected to avoid the “very high” designation for now.

In view of the impending new lockdown system, local leaders and MPs in Greater Manchester have argued that outbreaks in their areas have been largely contained among student populations.

In publicly issued statements on Sunday, two Tory MPs and five Labour MPs in the region warned they would not support the closure of the hospitality businesses. 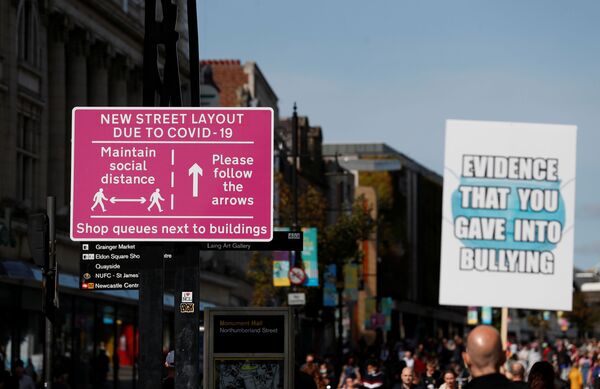 A social distancing sign is seen amid the spread of the coronavirus disease (COVID-19) in Newcastle, Britain, September 18, 2020.
© REUTERS / LEE SMITH

Legal proceedings to challenge the government’s closure of hospitality settings across parts of the north of England were launched by Sacha Lord, Greater Manchester’s night-time economy adviser.

Lord claims that the government had dismissed all calls for evidence have been ignored.

Yesterday, Liverpool mayor Joe Anderson was cited as saying that he felt the north of the country was “being treated with disdain by this Government”.

“I just wonder that, if this was in southern areas or in London, whether it would be at this level and not a different level,” he added.

After Boris Johnson conferred with Steve Rotheram, the Labour metro mayor for the Liverpool city region, on Sunday, government sources said that Rotheram had adopted a “constructive” position.

Late on Sunday Rotheram said on Twitter that new measures must “come with financial support to protect jobs and businesses”.

Contrary to some reports circulating tonight, no agreement has yet been reached with Government and negotiations are ongoing.

We have been clear that new restrictions must come with the financial support to protect jobs and businesses.

A deal isn't a deal until it is agreed. pic.twitter.com/XO2N0eKQvH

​The Labour mayor of Liverpool, Joe Anderson, said that while regional leaders had not agreed the deal over new lockdown protocols, they had been told “this is what government intends to do with ‘no buts’.”

The measures are expected to apply to the Liverpool city region, which has a population of about 1.5 million people.
The stricter coronavirus-related measures have been defended by Chris Hopson, chief executive of NHS Providers.

He insisted that hospitals in the north of England were in danger of being overwhelmed unless such restrictions were adopted.

In a comment on the developments, a Downing Street spokesman said:

“We must do everything we can to protect the NHS and make sure it can continue to deliver the services so many people rely on.”