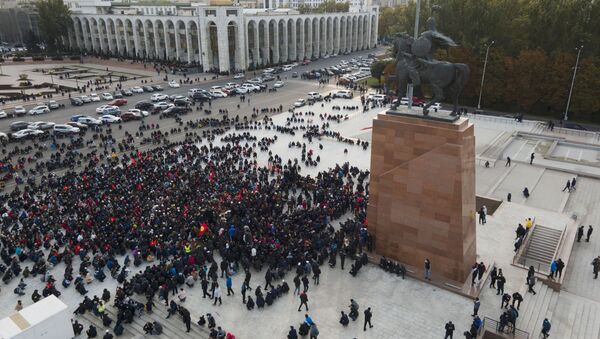 © Sputnik
/
Go to the photo bank
Subscribe
The Kyrgyz law enforcement agencies have regained control over the building housing the parliament and the presidential administration, which was previously seized by protesters, the presidential office said on Monday.

"First Deputy Prosecutor General [Nurlan Dardanov] told [President Sooronbay Jeenbekov] that yesterday, on October 11, investigative teams inspected the administrative building of the Jogorku Kenesh [Kyrgyz parliament] and it was transferred to the jurisdiction of the law enforcement agencies," a spokesperson for the presidential office said.

The State Committee for National Security briefed the president on its efforts to curb activities of "destructive groups" promoting destabilization, the spokesperson went on to say.

Re-introduction of the State of Emergency

Kyrgyz President Sooronbay Jeenbekov has re-imposed the state of emergency in Bishkek, a spokesperson for his office said on Monday, explaining that the move is due to the parliament's inaction.

"Kyrgyz Republic President Sooronbay Jeenbekov has signed a decree, according to which the state of emergency on the territory of Bishkek is re-imposed," the spokesperson said.

Opposition protests in the Central Asian republic erupted last Monday in response to what many considered to be an unfair general election, which was held on 4 October. The unrest was marked by mobs of protesters overrunning government institutions and centres of power.

The protesters seized Bishkek's White House and city hall, also entering the building of the State Committee for National Security and prompting the release of former Kyrgyz president, Almazbek Atambaev, and other former officials.