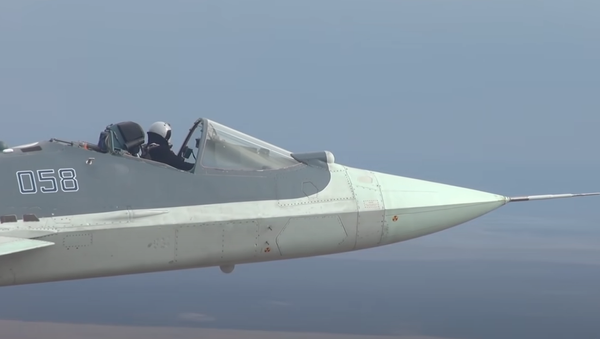 © Photo : Russian Ministry of Defence
Subscribe
Ilya Tsukanov
All materialsWrite to the author
The Sukhoi Su-57, formerly known as the ‘PAK FA’ or T-50, is a supermanoeuvreable fifth-generation strike fighter with stealth characteristics and the latest Russian avionics and weapons systems. The jet formally entered mass production in 2019, with Russia’s Aerospace Forces set to receive at least 76 of the planes before 2028.

US media have taken note of “some very unusual flying” that was featured in a newly released video by the Russian Ministry of Defence.

The video, dedicated to the 100th anniversary of the founding of the legendary Chkalov State Flight Test Center, includes several seconds of footage of a Su-57 flying without its canopy.

“Because sometimes you just have to take a cruise without the shield that protects you from freezing to death,” Popular Mechanics contributor Kyle Mizokami quipped, adding that the canopy-free flight was probably a test meant “to ensure there are no unexpected issues flying the plane if the canopy were suddenly to come off.”

Mizokami suggested that, judging by the clip, the Su-57’s pilot “appears to be wearing a very heavy jacket or flight suit as a means of protection.”

The Drive, meanwhile, jokingly dubbed the canopy-free Su-57 a “cabriolet version” of the jet, and similarly believes that the test pilot was “wearing a non-standard protective flight suit” during the flight.

The US military no longer engages in flight testing of jets sans-canopy, although some of its allies have been known to test-fly military aircraft without their protective Plexiglas shield. In 1988, BAE Systems test pilot Keith Hartley famously flew around in a canopy-free Tornado strike jet at 500 knots, with the test run carried out six years after the Tornado actually entered into service.

In 1988, our test pilot Keith Hartley flew at 500 knots in a Tornado aircraft with the canopy off, testing the emergency escape procedures of the jet; just one example of the lengths we go to test the safety of the planes we build for the RAF. https://t.co/ueE5RDQt0Y #RAF100 pic.twitter.com/jcgL1OUIKL

It’s not clear from the video released by the Russian military when the Su-57’s canopy-free flight took place.

Emergency situations in which canopies fly off jets mid-flight are not unknown. Last year, a pair of Israeli pilots was forced to make an emergency landing after their F-15’s canopy suddenly blew off at 30,000 feet. In July 2017, a US Air Force pilot belly-landed his Fairchild Republic A-10 Thunderboly, also known as the "Warthog" close air-support aircraft after its canopy flew off and its landing gear failed to release.