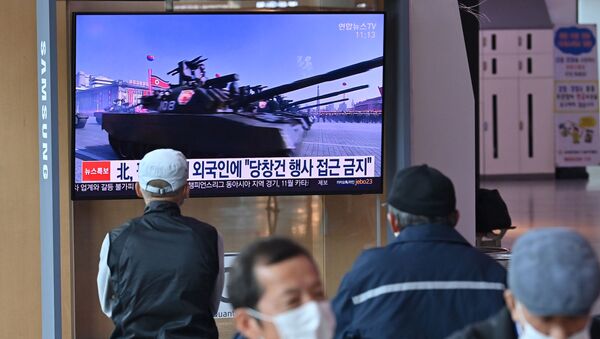 Henry Batyaev
All materialsWrite to the author
North Korea has staged a military parade commemorating the 75th anniversary of the founding of the ruling Workers' Party of Korea, according to live footage aired on the country's stage television.

A video has been shared online that shows what appears to be fireworks and an airshow in the North Korean capital Pyongyang on the occasion of the 75th anniversary of the Workers' Party.

In the footage which cannot be confirmed as authentic, both the fireworks and the aircraft are seen forming the numeral "75" against the backdrop of a pitch-black sky.

South Korean Joint Chiefs of Staff earlier in the day announced it detected signs that North Korea had conducted a military parade at the Kim Il-sung square at dawn by mobilising a large number of equipment and personnel.