Earlier this week, Russian Foreign Ministry spokeswoman Maria Zakharova said the incident of Navalny's alleged poisoning was just a pretext to impose sanctions against Russia which had been planned a long time.

Germany must clarify the situation involving Navalny to Russia in line with the European Convention on Mutual Assistance in Criminal Matters, the Russian Foreign Ministry said.

"The German side must provide explanations, despite its persistent reluctance to do so. Excuses previously made to us are not accepted. They are unconvincing," the ministry's statement reads.

The ministry added that 'Novichok' is a purely Western brand, with about 140 varieties throughout Western countries, and Russia does not have it.

According to the ministry, the structure and mass spectrum of "Novichok," which is claimed to have been behind the poisoning of former double agent Sergei Skripal and opposition figure Alexey Navalny, were first revealed in the mass spectral database of the American Institute of Standards in 1998 (NIST 98).

"It is telling that information on this substance came there from a research centre of the US Department of Defense. Subsequently, a whole family of toxin chemicals not covered by the CWC [Chemical Weapons Convention] was formed on the basis of this compound. Along with Americans, at least 20 Western countries have worked with them [these toxins]. So, Novichok is a purely Western brand. It has been synthesized and is available in about 140 variants in these countries. We do not possess it," the ministry added. 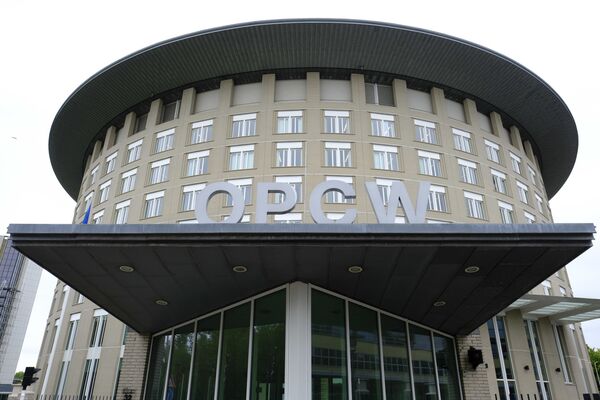 FILE - This Friday May 5, 2017 file photo shows the headquarters of the Organisation for the Prohibition of Chemical Weapons (OPCW), The Hague, Netherlands
© AP Photo / Peter Dejong

The OPCW said on Tuesday that a substance similar to nerve agent Novichok, but not included on the lists of banned chemicals, had been found in Navalny's system. The German government believes the OPCW's statement actually confirmed the opposition activist’s poisoning with a Novichok group substance but admits that the substance in question is not formally banned.

Russia has also said that the German Foreign Minister's address to lawmakers on the "Navalny case" shows that Moscow is still subject to propaganda attacks.

"As for Heiko Maas’ thesis that Russia’s claims against Germany and the OPCW are absurd, such remarks are outrageous and do not stand up to any criticism. All we want is to get legal, technical and organizational assistance both in the bilateral Russian-German format and via the OPCW in the interests of conducting a comprehensive, objective and unbiased investigation of all the circumstances of the incident that occurred with Alexey Navalny," the ministry said.

German Foreign Minister Heiko Maas said earlier that Berlin will discuss with its  OPCW and EU partners a general reaction to the incident with Navalny, adding that the EU may "very quickly" impose sanctions against those people who they believe are involved in the development of chemical weapons in Russia.

Russian Foreign Ministry's spokeswoman, Maria Zakharova, said earlier this week that the incident with Russian opposition figure Navalny was used just as a pretext for introducing sanctions against Russia that had long been in the works.