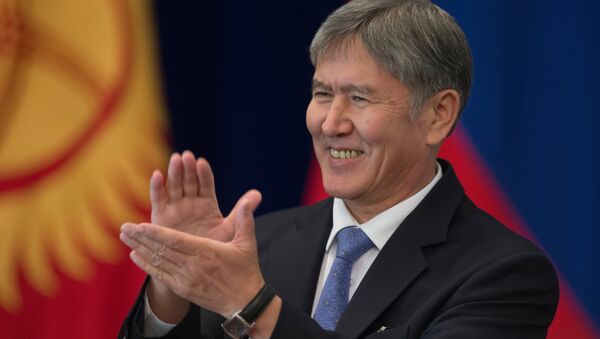 © Sputnik / Sergey Guneev
/
Go to the mediabank
Subscribe
International
India
Africa
Maxim Minaev
All materialsWrite to the author
On Monday, large-scale protests arose in Kyrgyzstan. Situation escalated after opposition groups seized government buildings in response to protests against a controversial parliamentary election which has since been annulled.

Former President of Kyrgyzstan Almazbek Atambayev has been detained, according to reports which cite his political party.

Atambayev's supporters reported on social media earlier in the day that security forces had arrived at his mansion in Koy Tash, some 12 miles from Bishkek. His party subsequently said that Atambayev was detained.

"On October 10, 2020 ... GNKB together with the Kyrgyz Interior Ministry detained Atambayev Almazbek, Sagymbayev K. and Musakeev D. on the bases of a warrant issued in the framework of a criminal case initiated over organization of mass unrest in the city of Bishkek," the committee said in a press release.

Meanwhile, a photo emerged online, allegedly showing the moment Atambayev's spouse, Raisa, is being detained along with their sons.

Earlier, Atambayev and his supporters had arrived at a rally in the centre of Bishkek, but the supporters of the opposition politician Sadyr Japarov, whose nomination to the post of Prime Minister of Kyrgyzstan was approved by the parliament of the republic on 6 October, did not allow the rally to take place.

At the moment of the ex-president's departure from the square, an unknown person fired several shots at Atambayev's car.