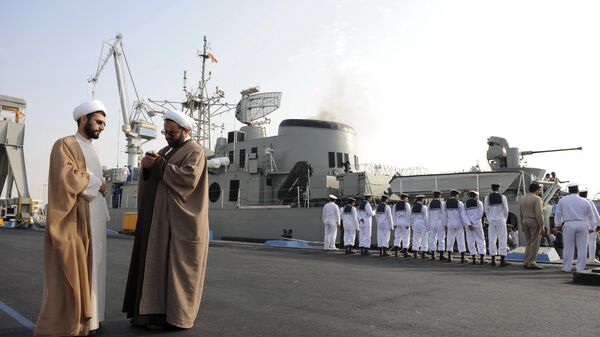 Ilya Tsukanov
All materialsWrite to the author
The Islamic Republic Navy’s fleet of surface warships includes vessels ranging from small patrol boats and corvettes to Moudge-class frigates. Over the past decade, Iranian ships have made port visits to countries ranging from Syria and South Africa to China. But Tehran has yet to make good its plans to send its ships to the western Hemisphere.

Iran is preparing to unveil a new warship capable of circumnavigating the globe three times over without refueling, enabling it to reach any point on the planet and giving Tehran a tit-for-tat capability to respond to the deployment of US warships off Iran’s coast.

Speaking to Iranian media on Saturday, Iranian Navy Commander Rear Admiral Hossein Khanzadi revealed that the auxiliary ship, named the ‘Persian Gulf’, will be equipped with a range of weapons systems, including missiles, drones and helicopters.

The ship is expected to be formally unveiled sometime between 21 November and 20 December.

According to Khanzadi, the Persian Gulf’s deployment will help ensure “defence and security stability” in the region and beyond.

The commander did not provide any more details about the Persian Gulf’s characteristics or capabilities. Last month however, he announced that the Navy would soon unveil a 231-meter-long dock ship capable of carrying up to seven choppers, as well as drones, missiles and electronic warfare equipment. It’s not clear whether the ‘Persian Gulf’ and this new dock ship are one and the same vessel.

Iran will mark Navy Day on 28 November. This year, the force is expected to take delivery of several new warships, including the Dena Moudge-class frigate, the Saba minesweeper and a new class of missile boats.

Khanzadi did not specify where his force’s new ultra-long-range vessel might be deployed. In recent years, Iranian warships have made port visits throughout the Middle East, East Asia and the east coast of Africa, and have taken part in anti-piracy patrols in the Gulf of Aden against Somali pirates. However, despite repeated talk of plans to sail ships further west into the Atlantic Ocean and the western Hemisphere, Tehran has yet to achieve this.

US Sails Warship Off Venezuela’s Coastal Waters Citing Treaty Washington Itself Hasn’t Ratified
This spring, Iran did send civilian tanker ships filled with fuel, food and supplies to sanctions-starved Venezuela, with the latest flotilla arriving in the Latin American country in late September.

Tehran has also repeatedly urged the US to stop deploying its warships in the Persian Gulf and the Middle East generally, proposing that regional powers take care of the region’s security instead. In 2019, at the UN, Iranian President Hassan Rouhani proposed the creation of a "Coalition of Hope" including all nations which border the Persian Gulf.

Late last month, after the US parked a carrier strike group in the Persian Gulf, Rouhani accused US forces in the Middle East of undermining regional stability and security, and called on all nations in the region where American troops are based to make a concerted effort to expel them.