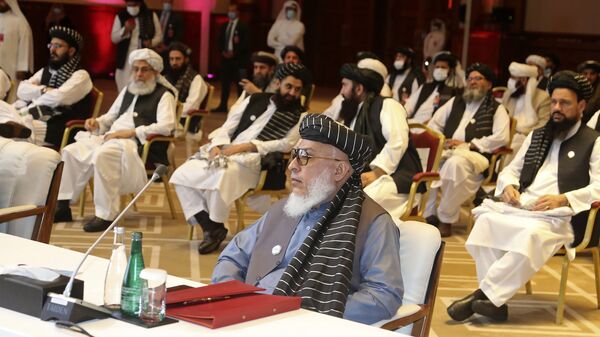 James Baillie
All materialsWrite to the author
US President Donald Trump said Thursday that he wanted to have US troops in Afghanistan home by Christmas, after 19 years of combat in the Middle East. The assertion reportedly caught many military and civil officials by surprise and is seen by some Democrats as a way for Trump to gain additional points prior to the 3 November election.

Leaders of the Afghan militant group, the Taliban, said on Saturday that they hoped US President Donald Trump would beat Democratic rival, Joe Biden, in the US general election in November.

"We hope he will win the election and wind up [the] US military presence in Afghanistan," Taliban spokesman Zabihullah Mujahid told CBS News in a phone interview,

An unnamed Taliban leader reportedly told the outlet that the group was worried about Trump's health after he tested positive for coronavirus. "When we heard about Trump being COVID-19 positive, we got worried for his health, but seems he is getting better."

Trump on Thursday tweeted that he wanted to have US troops in Afghanistan home by Christmas, as the US has been involved in a war in the nation for 19 years.

Trump expanded on his idea to Fox Business Network. "Nineteen years is enough, they're acting as policemen, they're not acting as troops, we have the greatest troops in the world. I wiped out 100 percent of the ISIS caliphate, I killed [Quds force commander Qasem] Soleimani, I killed [ISIS leader Abu Bakr] al-Baghdadi," the president declared.

Trump's withdrawal proposal was a surprise to administration officials and would complicate peace talks, according to the Associated Press. Senior US military leaders previously cast doubt on the practicalities of an earlier withdrawal.

The peace talks were set up under a withdrawal agreement signed earlier this year between the Taliban and the Trump administration.

The US-Taliban deal laid out a full departure of American forces by May 2021, but only if conditions on counter-terrorism were met.

“What we need to see is that they’re not going to allow al-Qaida to base there,” said Gen. Frank McKenzie, head of US Central Command, in a September interview with NBC News. “And that has just not yet been demonstrated to my satisfaction.”

Last month, Secretary of State Mike Pompeo said the Pentagon is on track to withdraw all US troops from Afghanistan by spring of 2021.

The US invaded Afghanistan following the 9/11 terrorist attacks, as the head of the terrorist group Al Qaeda, Osama Bin Laden, was believed to be hiding in the country at the time. The Taliban were quickly removed from power but continued over the past two decades as a dominant guerrilla force, consistently seizing territory and attacking government and civilian targets, while the US and its allies struggled to stop the collapse of its government in Afghanistan.

000000
Popular comments
To All Irish in America.. get out now.. when Zabihullah Mujahid wishes Trump good health you are all doomed... since when is جهاد‎ jihād compatible with this 'concern' for Trump's health - it is somewhat depressing / pathetic that the Taliban have to resort to such fawning.. :-(
Donnelly
11 October 2020, 01:21 GMT
000000
These Taliban who today support Trump for reelection are the same Dudes, who at 2018 have Killed between US Soldiers/Contractors over 4,000 Soules. This support Smells and leaves a bad sensation in anybody’s mind.
Normpich
11 October 2020, 03:43 GMT
000000
Newsfeed
0
New firstOld first
loader
LIVE
Заголовок открываемого материала
Access to the chat has been blocked for violating the rules . You will be able to participate again through:∞. If you do not agree with the blocking, please use the feedback form
The discussion is closed. You can participate in the discussion within 24 hours after the publication of the article.
To participate in the discussion
log in or register
loader
Chats
Заголовок открываемого материала
Worldwide
InternationalEnglishEnglishMundoEspañolSpanish
Europe
DeutschlandDeutschGermanFranceFrançaisFrenchΕλλάδαΕλληνικάGreekItaliaItalianoItalianČeská republikaČeštinaCzechPolskaPolskiPolishСрбиjаСрпскиSerbianLatvijaLatviešuLatvianLietuvaLietuviųLithuanianMoldovaMoldoveneascăMoldavianБеларусьБеларускiBelarusian
Transcaucasia
ԱրմենիաՀայերենArmenianАҧсныАҧсышәалаAbkhazХуссар ИрыстонИронауОssetianსაქართველოქართულიGeorgianAzərbaycanАzərbaycancaAzerbaijani
Middle East
Sputnik عربيArabicArabicTürkiyeTürkçeTurkishSputnik ایرانPersianPersianSputnik افغانستانDariDari
Central Asia
ҚазақстанҚазақ тіліKazakhКыргызстанКыргызчаKyrgyzOʻzbekistonЎзбекчаUzbekТоҷикистонТоҷикӣTajik
East & Southeast Asia
Việt NamTiếng ViệtVietnamese日本日本語Japanese中国中文Chinese
South America
BrasilPortuguêsPortuguese
NewsfeedBreaking
16:14 GMTRussia Urges UN Mission to Ensure Security of Staff in Russian Office in Pristina
16:06 GMTGreek Police Say 7 Officers Injured in Chasing Car Thieves in Athens, One Offender Dead
15:47 GMTRussia-Turkey Friendship Park Opens in Antalya - Video
15:06 GMTTuskless Elephants Evolve in Mozambique Amid Ivory Poaching, Scientists Say
15:03 GMTCCTV Footage Shows Moment Russian Explosives Plant Turned Into Deadly Blazing Inferno
14:54 GMTStunning Discovery of 193 Million-Year-Old Dinosaur Eggs Sheds New Light on Reptiles’ Early Species
14:52 GMTErdogan: Ambassadors of 10 Countries Calling for Human Rights Activist's Release to Be Expelled
14:26 GMTAntifa Protest in Support of Left-Wing Politics Takes Place in Stuttgart
14:18 GMTGazprom Ready to Prolong Gas Supplies to Moldova if Kishinev Pays Gas Debts
14:06 GMTRussian MoD: Berlin Must Know How Amassing Troops Near Russia's Border Ended for Europe in Past
13:59 GMTTokyo Says Self-Defenсe Forces Fighters Scrambled Over Chinese Chopper Takeoff Near Danjo
13:54 GMT24-year-old Who Prepared Fatal Prop Gun for Baldwin Was Worried She ‘Wasn’t Ready’ for Armourer Job
13:15 GMT‘Wicked Sense of Humour’: Turkey Pinches Reporter’s Buttocks, Other Birds ‘Giggle’ - Video
13:02 GMTRally in Support of Assange Takes Place in London
12:28 GMTDHS to Dole Out $455K to Erect Fence Around Biden’s ‘Summer White House’ in Delaware
12:21 GMTMoscow Assured Chisinau of Additional Gas Supplies in October, Moldovan Deputy Prime Minister Says
12:20 GMTMerkel Says Always Felt 'Significant Differences' of Opinions With Putin
12:12 GMTAuthor of Infamous Steele Dossier Claims Putin May Have Served Him Tea
12:08 GMTYellow Vest Protesters Hold New Round of Anti-Government Rallies in Paris
11:50 GMTSouth Korea Reaches 70% Full Vaccination Goal, Reports Say