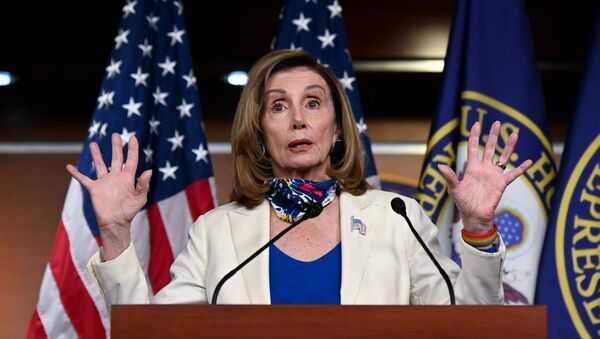 © REUTERS / ERIN SCOTT
Subscribe
The Democratic Party House leader claimed that UK PM Boris Johnson - and not the Medicines and Healthcare products Regulatory Agency - has the power to approve new drugs, and that a US president could overrule the federal Food and Drug Administration.

US Speaker of the House Nancy Pelosi claimed that British Prime Minister Boris Johnson has the power to approve new drugs before they pass clinical trials.

Matthews, noting that Pelosi has previously criticized Johnson over his implementation of the UK's vote to leave the European Union, asked if she thought that the PM is unfit to lead the UK government after his bout with the coronavirus six months earlier.

"I have no idea, nor do I have of President Trump," Pelosi admitted, before claiming: "Clearly he is on medication. Any of us who is under medication of that seriousness is in an altered state."

The speaker claimed her real concern was that Trump would "embrace" a British-developed vaccine for COVID-19 and that the UK drug licensing agency was "not on a par" with the US Food and Drug Administration.

"I think we have to be very careful about what happens in the UK," she said. "My concern is that the UK’s system for that kind of judgment is not on a par with ours in the United States."

"So if Boris Johnson decides if he’s going to approve a drug, and this president embraces that, that’s a concern that I have about any similarity between the two."

British prime ministers have no say in licensing drugs and vaccines, which is governed by the Medicines and Healthcare Products Regulatory Agency.

Research into a COVID-19 vaccine has been underway at the UK's Oxford University since April. Unconfirmed media reports on Thursday said large-scale trials involving tens of thousands of subjects could begin in November. However, the vaccine requires a booster 28 days after the first dose, complicating a quick roll-out.

The UK had some 17,500 active coronavirus cases as of Thursday amid a new spike in infections. Nearly 43,000 have died in the pandemic since March.

Trump Says Pelosi’s 25th Amendment Changes Meant to Replace Biden With Harris if Ex-VP Wins Election
Last month Pelosi threatened to use the Democrat majority in the House of Representatives to block a free trade deal with the UK if the British Parliament passes new legislation that ensures Northern Ireland remains within the internal market of the UK in the event of a no-deal Brexit.

Johnson was discharged from St Thomas Hospital, a major National Health Service facility across the Thames from Parliament, on April 12 after several days in intensive care after testing positive for COVID-19. He returned to work two weeks later, with Foreign Secretary Dominic Raab deputising for him in the meantime.

Trump and his wife Melania were admitted last Friday October 2 to the Walter Reed Medical Centre near Washington DC for four days after they both tested positive for the virus. Trump returned to the White House on Monday evening.

000000
Popular comments
This one I cannot hold against Pelosi. She is supposed to be intimately knowledgeable about US law. There is no requirement to be fluent in the laws of another country. She doesn't look dumb over this. She looks incredibly dumb over a rack of domestic issues though.
rgl
10 October 2020, 00:13 GMT2
000000
On any given day Nasty Nancy evidences more ignorance that just about UK drug rules. She and Joe would make a great pair sitting in their wheelchairs at Sunny Palms Sanitarium as they slide deeper into dementia.