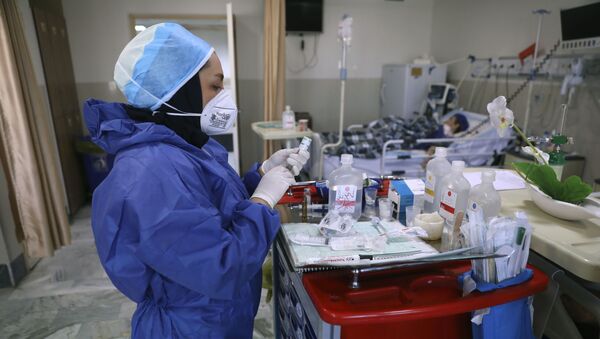 Morgan Artyukhina
All materialsWrite to the author
On Thursday, the US State Department announced new economic sanctions targeting 18 Iranian banks, claiming it was further depriving Iran “of funds to carry out its support for terrorist activities and nuclear extortion that threatens the world.” However, the real effect will be to deprive Iranians of essential medicines, an expert told Sputnik.

The sanctions are just the latest attempt by Washington to economically and politically isolate Tehran after US President Donald Trump unilaterally withdrew from the 2015 Iran nuclear deal. Like that decision, US allies in Europe have heavily criticized the new sanctions.

“It’s like a punch in the face to the Europeans, who have gone out of their way to indicate to the Americans that they view it as being extremely threatening to humanitarian assistance or humanitarian trade going to Iran,” Elizabeth Rosenberg of the Center for a New American Security think tank told Reuters about the sanctions.

An unnamed senior European official told the Washington Post the governments of the UK, Germany and France feared that Iran’s foreign assets would be effectively frozen by the sanctions, “thus further exacerbating the shortage of foreign currency to pay for humanitarian imports.”

However, US Treasury Secretary Steve Mnuchin has claimed the sanctions will not interfere with importing medicine or food.

“There is no doubt that the treasury secretary is not telling the truth. The United States wants to prevent Iran from using any currency, not just the dollar, and any part of the financial system,” Seyed Mohammad Marandi, professor of English literature and Orientalism at the University of Tehran, told Radio Sputnik’s By Any Means Necessary on Friday.

Marandi told hosts Sean Blackmon and Jacquie Luqman the US was blocking humanitarian goods from entering the country, including medicine, agricultural products and the machinery and materials to produce them.

“All of them are being blocked by the United States intentionally. The objective is to create a catastrophic situation for the Iranian people,” Marandi said. “And this is not new: when we see what the United States and the Saudis did to Yemen, that’s basically been their objective from day one. During the Yemeni war, the American government, they helped the Saudis in starving the people of Yemen. They tried to starve Yemen in order to force them to surrender. And they created a naval blockade preventing food from coming in.”

“And not just the United States - the Europeans, the Canadians, they all provided the Saudis with the necessary weapons and the advisers and the trainers to be able to carry out this objective and to force starvation upon the people of that country,” he continued.

“And it failed in Yemen. The poorest country in the world, devastated, has effectively defeated the Saudis, and the Saudis are moving towards greater crisis because of the collapse in the oil prices, the coronavirus and their failure in Yemen,” Marandi told Sputnik.

“So in the case of Iran, obviously the United States will fail. They will succeed in killing people. The price of certain medicines has gone up. Cancer patients especially are very vulnerable; the price of their medicine has gone up dramatically. And some medicines are not available, there are shortages of certain medicines, so the US government can gloat that they succeeded in killing people. They can celebrate that. It will make the costs of living more expensive; food will be more inaccessible to poor people. I’m sure that’s something that will satisfy senators from both the Republican and the Democratic Party. I’m sure they take pleasure in that.”

“But it will not force Iran to give up its sovereignty and its rights. Just as the Iranians prevented ISIS [Daesh] and al-Qaeda from taking over Syria and Iraq,” Marandi said. “The same ISIS and al-Qaeda where the Americans, the Saudis and unfortunately the Turkish government among others, the Israelis, worked together to … undermine Syria. They failed there; Syria paid a heavy price, but they failed. In the case of Iran, I have no doubt that they will fail.”

“The sad thing is that the American people are more or less ignorant about this reality, because the corporate media - the mainstream media, as they call it - they have no interest in the people of Iran and in starvation,” Marandi told Sputnik, noting that “they basically toe the line when it comes to foreign policy, and there’s no real difference between Democrats and Republicans when it comes to Yemen, Iran, Syria, Venezuela and the misery that they’ve created in Libya or Afghanistan or Iraq or elsewhere, like Cuba.”

Marandi noted that the conditions given by US Secretary of State Mike Pompeo in November 2018 for the lowering of sanctions “meant that Iran has to give up its sovereignty. It will no longer be a nation-state.”

“Then he said if Iran does not accept those conditions, which no country in the world will ever do, then the people of Iran will effectively have to starve. That’s what he was saying, and that’s what US policy has been ever since,” he added.

Marandi noted that earlier on Friday, he spoke with an Iranian doctor who is working on an Iranian COVID-19 vaccine. “He told me that the United States is actively preventing Iran from making progress. Whatever material Iran needs, they block those materials from being purchased by Iran. So the American government does not want Iran to have a vaccine for this, and the American government, when the virus hit the country, they increased sanctions, and now they’re increasing sanctions further, to prevent Iran from fighting the coronavirus.”

However, Marandi also noted that despite US attempts to encircle and isolate Iran in the region politically, Washington’s readiness to use economic sanctions as a weapon against all adversaries is “facilitating a convergence of interests among these countries.”

“Iran’s relationship with its neighbors like Iraq or Afghanistan are quite good, and the reason is because these governments want to have good relations despite the United States,” he noted. “In the case of China or Russia, I think it’s mostly the doing of the United States, the very good relationship that’s being built … Since these countries are being threatened by the likes of Pompeo or formerly [White House national security adviser John] Bolton and Trump and others and the neocons, then obviously they’re going to be looking for countries to work more closely with in order to prevent the United States government from doing anything foolish.”