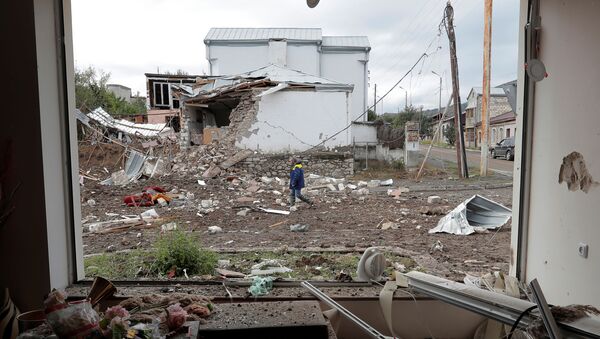 The clashes between Armenia and Azerbaijan in Nagorno-Karabakh have been escalating for almost two weeks, with both sides claiming they've managed to eliminate a large number of enemy troops and publishing videos of destroyed enemy military vehicles.

The military conflict in Karabakh continues for the twelfth day after several explosions rocked Stepanakert, the capital of the self-proclaimed Nagorno-Karabakh Republic (Republic of Artsakh) on Thursday.

Russia, the US, France, Germany, and other countries have called for a return to negotiations. Turkey, meanwhile, has stated it will back Azerbaijan "both in talks and combat", claiming that Armenia must leave the "occupied territories".

The predominantly Armenian-populated Nagorno-Karabakh region declared its independence from Azerbaijan in 1991, which led to a major conflict between Yerevan and Baku that lasted until 1994 when the sides agreed to start talks on the dispute.

Baku, Yerevan Agree to Ceasefire in Nagorno-Karabakh After Negotiations in Moscow
21:41 GMT 09.10.2020

MOSCOW (Sputnik) – Several dozens of Armenians have gathered in the center of Paris to hold a rally aimed at attracting public attention to the situation in conflict-torn Nagorno-Karabakh, a Sputnik correspondent reported.

The demonstration is taking place near the Arc de Triomphe, according to the broadcast of Sputnik France. Some activists have parked their cars with Armenian flags at the Place Charles de Gaulle.

Police are ensuring security at the site of the rally. Some activists reported about the use of tear gas by law enforcement officers. This information has not been confirmed yet.

TORONTO (Sputnik) - Canadian Foreign Minister Francois-Philippe Champagne said on Friday that he told his Turkish counterpart Mevlut Cavusolgu Ankara must stay out of the conflict between Armenia and Azerbaijan in Nagorno-Karabakh.

"My key message was: Stay out of the conflict," Champagne told reporters. "I certainly urged my Turkish counterpart to play a role in de-escalation, staying out of the conflict and encouraging Azerbaijan to come back to the negotiating table.

Champagne said Cavusolgu was in agreement that there is no military solution to the dispute and would do his part in bringing the warring sides to the negotiating table.

Champagne also said he explained to Cavusoglu Canada’s export rules following its decision earlier this week to suspended export permits to Turkey amid allegations that Canadian military equipment is being used in the Nagorno-Karabakh conflict.

Champagne added that he deplores anyone who believes there is a military solution to the dispute in Nagorno-Karabakh, following Azerbaijani President Ilham Aliyev's address to the nation, in which he said that he disagrees with the premise that no military solution exists.

"First of all, we would like to call [on] all parties in the conflict for a ceasefire. This is a pandemic, which is affecting the whole world. So, I hope they would agree to a ceasefire. And second, any differences could be resolved amicably. And we hope this conflict also will be resolved amicably, without loss of life from any of the parties", The World Health Organisation's (WHO) secretary-general, Tedros Adhanom Ghebreyesu, said at a press conference.

"There is no more line of contact. We have broken it through. They [Nagorno-Karabakh residents] have been building this contact line for 30 years ... They have erected concrete fortifications over the 30 years. We have broken through them. Nobody can do anything in front of an Azerbaijani soldier. We have destroyed the contact line ... They say there will be a new line of contact. No! We will return our territories", Azerbaijani President Ilham Aliyev said addressing the nation.

Azerbaijani President Ilham Aliyev said on Friday that the status quo on Nagorno-Karabakh has ceased to exist after Baku changed it.

"The status quo no longer exists. I have changed the status quo. There is no more status quo on the battlefield", Aliyev said addressing the nation.

"The people of Azerbaijan has repeatedly heard from the mediators and some heads of international organizations that the conflict [in Nagorno-Karabakh] has no military solution. And I said that I did not agree with this thesis. And I was right", Aliyev said addressing the nation.

"Negotiations have been ongoing for about 30 years. Has there been any shift? Have we received back at least a centimetre of our lands? Did we force the aggressor to leave the occupied territories and comply with the UN Security Council resolutions? No. How is the issue being resolved now? Not by military means? The issue is resolved precisely by military means. First by military means and then politically", Aliyev concluded.

The scheduled Friday meeting of foreign ministers of Azerbaijan, Armenia and Russia on the Nagorno-Karabakh conflict in Moscow will clarify "a lot", Azerbaijani President Ilham Aliyev said during an address to the nation, adding that basic principles should be adopted at the negotiations.

"I think that today's meeting in Moscow will clarify a lot. They must agree on basic principles", Aliyev said.

"If he [Mnatsakanyan] will say something like that today, then there will be no negotiations. I have said it, and no one will force us [to negotiate]", Aliyev said during an address to the nation.

Azerbaijani President Ilham Aliyev said on Friday that Armenia must abide by UN Security Council resolutions on Nagorno-Karabakh and that his country would not reconcile with an ongoing Armenian occupation of the region.

"Since the latest violence erupted on 27 September, artillery strikes have reportedly hit a number of cities, towns and villages. Information from different sources, which the UN Human Rights Office has not been able to independently verify, suggests that as of 8 October some 53 civilians had been killed, including children, as a result of the hostilities", UN High Commissioner for Human Rights Michelle Bachelet's office said in a press release.

Azerbaijani President Ilham Aliyev said that he was giving Yerevan the last chance to return to negotiations and militarily vacate the region.

"We give them one last chance. Withdraw troops, return to negotiations, take commitments", Aliyev said, after claiming that Azerbaijani forces were showing their superiority both on the battlefield and at the negotiation table.

Foreign Ministers Sergei Lavrov of Russia, Zohrab Mnatsakanyan of Armenia and Jeyhun Bayramov of Azerbaijan have begun negotiations in Moscow on the situation in Nagorno-Karabakh, a Sputnik correspondent reported.

The Armenian Foreign Ministry said earlier that the talks would exclusively concern the cessation of hostilities in Nagorno-Karabakh and humanitarian issues, such as the exchange of prisoners of war and bodies of those killed. In turn, according to AFP, the administration of the French president stated that Armenia and Azerbaijan could agree on a truce on Nagorno-Karabakh on Friday evening or Saturday.

"Prime Minister Nikol Pashinyan today held another telephone conversation with French President Emmanuel Macron. Prime Minister Pashinyan briefed his interlocutor on the ongoing hostilities in Nagorno-Karabakh and the developments taking place in that context", the prime minister's press service said in a statement.

Macron has called for immediate ceasefire and initiation of negotiations on the peaceful regulation of the crisis in the region within the framework of the OSCE Minsk Group, created in 1992 to negotiate an Azerbaijani-Armenian conflict over Artsakh. Notably, the group is co-chaired by Russia, France and the US, and includes Armenia and Azerbaijan. Belarus, Germany, Portugal, the Netherlands, Finland, Turkey, Italy and Sweden also hold its membership.

The statement specified that Macron keeps in close touch with Russian President Vladimir Putin, evoking his call made on Thursday to end hostilities in Karabakh to exchange prisoners and bodies of those killed.

According to the statement, Pashinyan underlined the importance of the Artsakh unrecognized Republic's "right to self-determination" amid resolving the crisis in the region, and the need for support of this initiative by the international community.

"Ahead of the meeting of the foreign ministers of Russia, Azerbaijan, and Armenia, Russian President Vladimir Putin informed the participants of the [Security Council] meeting about his telephone conversations with Azerbaijani President Ilham Aliyev and Armenian Prime Minister Nikol Pashinyan", Kremlin spokesman Dmitry Peskov said.

Azerbaijan’s Defence Ministry said on Friday that Azeri forces downed an Armenian-launched missile bound for the city of Mingachevir.

"A ballistic missile launched from the territory of Armenia in the direction of Mingachevir was detected by Azerbaijan's Air Defence Systems and destroyed at an altitude of more than 20 kilometres [12 miles]", the ministry said in a post on Facebook.

Russian Prime Minister Mikhail Mishustin and his Armenian counterpart, Nikol Pashinyan, discussed the situation in Nagorno-Karabakh at their meeting, held in Yerevan after a session of the Eurasian Economic Union (EAEU)'s Intergovernmental Council.

The prime minister pointed to the need to urgently cease fire in the region.

Apart from that, Mishustin and Pashinyan discussed bilateral cooperation on energy, transport and industry. They emphasized the importance of implementing joint projects, deepening cooperation within the EAEU, and countering the coronavirus infection.

Armenian Foreign Minister Zohrab Mnatsakanyan has arrived in Moscow for taking part in consultations on the situation in Nagorno-Karabakh, according to the Flight Radar tracking service.

The Armenian-Azerbaijani consultations are expected to start in around an hour.

"We are particularly concerned over Turkey's active steps that could result in complete destabilization, not just regional, but in the whole world", Pashinyan told the Eurasian Economic Union's Intergovernmental Council.

The Armenian prime minister qualified the events enfolding along the contact line as "Azerbaijani-Turkish aggression against the Armenian people".

Pashinyan noted that "Turkey-recruited mercenaries and militants from Syria" were engaged in the combat operations against Armenia, along with "the Azerbaijani army, led by Turkish military experts".

"We stick to the principle of a peaceful settlement to the Nagorno-Karabakh conflict and we are ready to resume the peace process in accordance with the statements that the OSCE Minsk Group co-chairing countries' presidents and foreign ministers have made over the past few days", Armenian Prime Minister Nikol Pashinyan said at a meeting of the Eurasian Economic Union's Intergovernmental Council.

Armenia and Azerbaijan can reach agreement on Nagorno-Karabakh ceasefire either on Friday evening or on Saturday, the Elysee Palace told Agence France-Presse.

The French presidential administration expressed the belief that the truce would be concluded "on Friday evening or tomorrow", but noted nothing was certain yet.

BAKU/YEREVAN (Sputnik) - The Azerbaijani Defence Ministry in a statement on Friday said that battles on the line of contact in the self-proclaimed Republic of Artsakh (Republic of Nagorno-Karabakh) continued through the night until morning.

The ministry added in a separate press release that the regions of Goranboy, Terter, and Aghdam were under attack by the Armenian Army.

"The Azerbaijan Army is taking adequate measures against the armed forces of Armenia", the statement said.

The Armenian side, for its part, said that Stepanakert, the capital of the Republic of Artsakh, had come under enemy fire.

YEREVAN (Sputnik) - Two of the three Russians injured in the drone strikes that hit a cathedral in Nagorno-Karabakh's Shushi have already been transported to Armenia, Armenian Foreign Ministry spokeswoman Anna Nagdalyan said on Friday.

"Two Russians have already been transported to Armenia, a third one is on his way", Nagdalyan said.

On Thursday, repeated shelling damaged the Ghazanchetsots Cathedral in Shushi. Three Russians, journalists Yuri Kotenok and Levon Arzanov, and Grant Badalyan from the group that escorted them, were injured in the attack, which Armenia believes was conducted by the Azerbaijani Armed Forces.

When asked if the consultations could take place today, Zakharova said "yes".

She later specified the talks would be held "at the level of foreign ministers”.

On Thursday, Russian President Vladimir Putin called for a ceasefire in Karabakh and invited the Armenian and Azerbaijani foreign ministers to come to Moscow for consultations on Friday. Earlier in the day, Zakharova said that Baku and Yerevan had confirmed participation in the meeting.