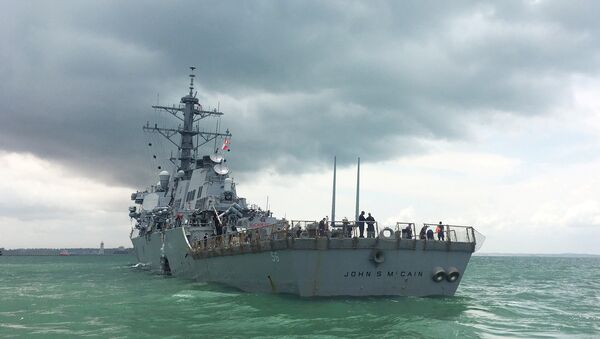 Tim Korso
All materials
Beijing recently accused the US of being the main factor leading to the militarisation of the South China Sea – something that has also been condemned by Washington. Chinese authorities have argued that the US military's activities in the area undermine regional efforts to resolve territorial disputes.

The Chinese Defence Ministry has stated that US destroyer the USS John S. McCain has ventured into waters near the China-controlled Parcel Islands in the disputed South China Sea. According to the ministry, it did so without receiving permission from Beijing.

The spokesperson for the ministry said Beijing demands that the ship leave Chinese waters, adding that should the vessel not comply, China would resolutely take steps to defend its national sovereignty and maintain stability in the region.

"We demand the US immediately stop such provocative actions, [and] strictly control and restrict military operations in the sea and air", the Defence Ministry's spokesperson said.

In August 2020, China warned the US that "military accidents" remain possible at sea, should Washington continue to provoke "troubles in the South China Sea" under the pretext of freedom of navigation operations – something that the Pentagon has been routinely doing over the last several years despite Beijing's objections. Chinese authorities have repeatedly demanded that the US "stop [its] provocative behaviour", but these requests have fallen on deaf ears.

Washington has repeatedly condemned what it calls "China's militarisation of the South China Sea" – an area riddled with conflicting territorial claims of China, Malaysia, Vietnam, Brunei, and the Philippines, but which is mostly controlled by Beijing's forces. The latter has constructed numerous military facilities and bases throughout the region, but China insists they are of a purely defensive nature.

Beijing recently stated that the so-called "militarisation" of the South China Sea was mainly being caused by the US itself. According to the Chinese authorities, Washington's actions are actually hindering attempts to resolve the disputes between the actors at the regional level.