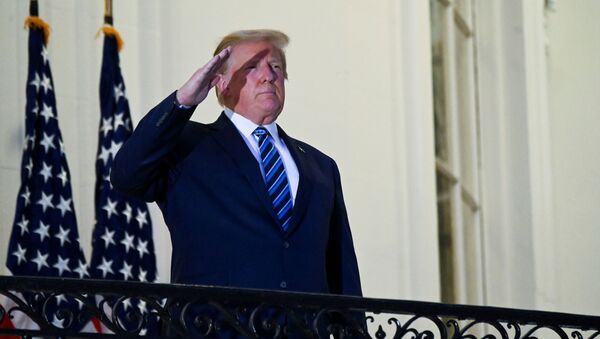 During a surprise trip to the medical center on November 16, 2019, Trump requested that both physicians and nonmedical staff, which included active-duty military service members, sign NDAs, the sources told NBC. At least two doctors at the facility reportedly refused to sign the NDAs and thus were not allowed to be involved in the president’s care, the sources said.

At the time of Trump’s visit to Walter Reed, the White House said that the president was there for an annual physical exam.

"Anticipating a very busy 2020, the president is taking advantage of a free weekend here in Washington, DC, to begin portions of his routine annual physical exam at Walter Reed," Stephanie Grisham, the White House press secretary at the time, said in a statement, Reuters reported in November 2019.

Unlike the president’s 2017 and 2018 annual physicals, the facility did not receive notice in advance about the president’s visit in November 2019, raising questions about its purpose.

However, the sources that recently spoke to NBC are not aware whether Trump’s most recent visit to the facility, following the president’s positive COVID-19 test, involved staff members that had signed NDAs.

Under the Health Insurance Portability and Accountability Act (HIPAA), anyone providing medical services in the US is prohibited by federal law from releasing the patient’s health information without their consent. In light of this, it’s unclear why Trump would require staff members at Walter Reed to sign NDAs.

"Any physician caring for the President is bound by patient-physician confidentiality guaranteed under HIPAA, and I'm not going to comment on internal procedures beyond that," White House Deputy Press Secretary Judd Deere said in a statement to NBC News.

Furthermore, all personnel who work in the White House Medical Unit must have a “Yankee White” security clearance. To obtain the clearance, they must be US citizens and pass extensive background checks.

There has been concern about how transparent Trump’s doctors have been about his health since he contracted the novel coronavirus. Dr. Sean Conley, the president’s personal physician, has repeatedly dodged questions about when Trump last tested negative for the virus, how high his temperature was and whether lung scans reveal any damage.

"We've done routine standard imaging. I'm just not at liberty to discuss," Conley told reporters Monday when asked whether the president had developed pneumonia in his lungs, NBC reported.

All written updates by Conley regarding the president’s health have also included the note: “I release the following information with the permission of President Donald J. Trump.”

Arthur Caplan, the director of medical ethics at the New York University Grossman School of Medicine, told NBC News that some prominent people request that their physicians sign NDAs, even though it is redundant in protecting their health information.

Trump spent three nights at Walter Reed after the president confirmed via social media on October 2 that he had tested positive for COVID-19. He was discharged late Monday and has since returned to the Oval Office to carry out his presidential duties.