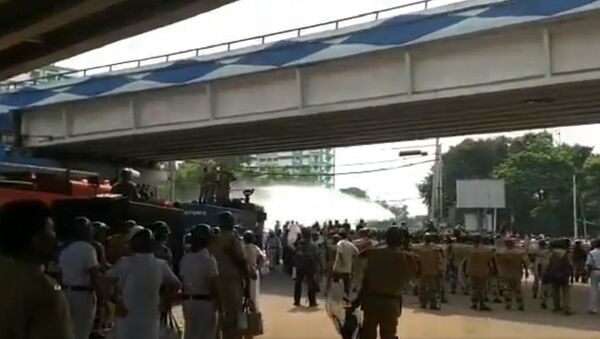 A Bharatiya Janata Party (BJP) worker was recently shot dead by unidentified bike-borne miscreants in the Indian state of West Bengal. BJP leaders later alleged a role of the state's ruling Trinamool Congress (TMC) party in the affair. Police have since arrested two people over the murder.

Police in the Indian state of West Bengal have used water cannos, tear gas, and resorted to baton-charging as clashes broke out between opposition Bharatiya Janta Party workers and police personnel during a protest over the recent death of BJP functionaries in the state.

The clashes occurred on Thursday as police tried to disperse the protesting BJP workers who were heading towards the State Secretariat to express their outrage against West Bengal State Chief Mamata Banerjee's government.

Hundreds of police personnel were stationed outside the BJP state headquarters in the state capital Kolkata on Thursday morning.

According to sources, about 2,000 police personnel have been deployed in Kolkata.

The BJP Yuva Morcha (BJYM) organised the agitation to protest against the alleged law and order problems in the state.

Local BJP leaders in the state had earlier claimed the march would be attended by over several thousand supporters. BJP supporters gathered from various districts and assembled at the four starting points.

Earlier this week, a key BJP leader B.L. Santhosh claimed that more than 110 BJP workers have been murdered under the Mamata Banerjee government.

Meanwhile, the West Bengal government on Wednesday had already announced that all the offices in the building would be shut for two days (Thursday and Friday) "for sanitisation purpose". The Writers' Building, the old secretariat in Kolkata, will also remain closed.