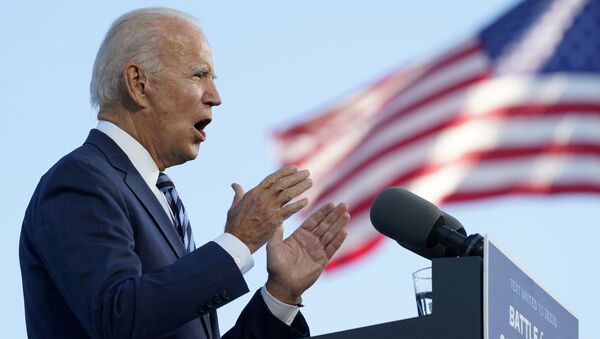 WASHINGTON (Sputnik) - Democratic presidential candidate Joe Biden will appear in a nationally televised town hall meeting on 15 October on the night he had been scheduled to debate President Donald Trump, his campaign said on Thursday.

"Joe Biden will still show up to speak directly with voters and take their questions," Biden's Deputy National Press Secretary Matt Hill said in a Twitter message. "He will join George Stephanopoulos on ABC for a town hall in Philadelphia, Pennsylvania."

On October 15th, @JoeBiden will still show up to speak directly with voters and take their questions. He will join @GStephanopoulos on @ABC for a town hall in Philadelphia, PA.

Earlier in the day, Trump had pulled out of his proposed second debate with Biden which had been scheduled for next Thursday, 15 October. The president announced his decision after the debate organizing commission had announced it would be conducted as a "virtual" event to eliminate any risk of COVID-19 infection.

The president said a virtual debate was not a genuine debate at all and announced he was planning to go back to his schedule of campaign rallies and speeches.

Trump spent three days in the hospital after he tested positive for COVID-19 before being released on Monday. Trump in a video message after leaving the hospital said he felt fine and told Americans not to fear the virus.