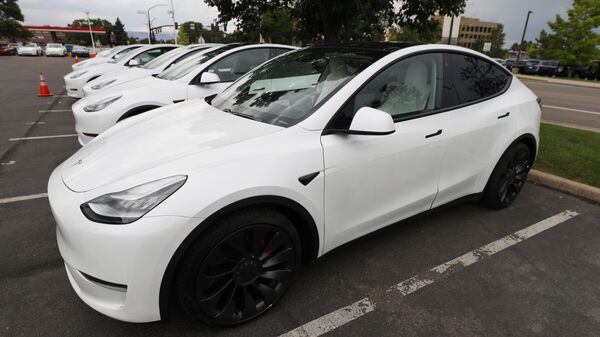 A California family recently revealed that their new Tesla Model Y turned into a convertible over the weekend after the roof suddenly blew off the vehicle while they were driving home immediately after purchasing it.

"Suddenly, there was a lot of wind; it sounded like there was a window open," Nathaniel Chien, 19, said in an interview with Business Insider regarding the Sunday mishap. "And then suddenly it lifted off."

Nathaniel’s 63-year-old father, Walter Chien, was sitting in the back seat trying to figure out the Tesla app when he noticed the roof had blown off.

"I looked up and the roof was gone," Walter told the outlet.

​When the family first picked up the car from the Dublin, California, Tesla service center, Walter said he noticed there was a gap on the front hood, with one side appearing wider than the other, and arranged to get the issue repaired. Nathaniel also noticed a creaking from the roof when they drove the car.

"You expect this kind of problem, but you don't expect the roof to come off," Walter said.

According to the family, the roof blew off while they were driving at around 70 mph on Interstate 580. However, no one was injured by the detached glass piece; the Chiens made sure to let the California Highway Patrol know about the incident.

"None of us knew how to react," Nathaniel explained. "We didn't scream or anything. There was an initial panic, and then we drove in a shocked silence all the way back."

Since the incident, the family has returned the new Model Y to the Tesla service center. The staff at the center apologized for the incident, offered to service the car for free and to provide the family with a rental during the repair process. The service representatives also said that “either the seal on the roof was faulty or they somehow just forgot to seal the roof on entirely,” Nathaniel told The Verge.

However, the Chiens declined to have the car serviced, deciding to return it for good.

On Monday, Walter said that he spoke to a Tesla representative who said that “everything was done correctly” when making the car.

"To me, that was more concerning," Chien told the Business Insider.

This is not the first time Tesla has had quality troubles, with many users reporting issues specifically with the Model Y, which was released in 2019, according to a report by Electrek.

In a recent survey of consumers by researcher JD Power, Tesla scored the worst among major carmakers, according to a report by the Wall Street Journal.

In early 2019, the Tesla Model 3 sedan was also stripped of its “recommended” status from product reviewer Consumer Reports after many owners reported issues with loose body trim and glass defects.

According to Tesla’s website, the Tesla Model Y is “designed for safety.”

“Like every Tesla, Model Y is designed to be the safest vehicle in its class. The low center of gravity, rigid body structure and large crumple zones provide unparalleled protection,” the company writes on its website.