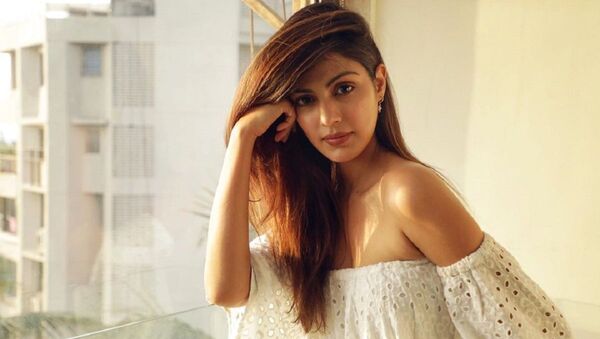 Advitya Bahl
All materialsWrite to the author
Rhea Chakraborty was arrested last month by India's anti-drugs unit on charges of supplying drugs to her boyfriend Bollywood actor Sushant Singh Rajput, who was found dead at his residence in Mumbai on 14 June. Rhea was accused of being an active member of a drug syndicate.

The Mumbai High Court on Wednesday granted bail to Sushant Singh Rajput’s ex-girlfriend Rhea Chakraborty nearly a month after her arrest in an alleged drug case related to the death of the actor.

Rhea was arrested on 8 September and has been in a Byculla jail cell in Mumbai ever since. Her bail plea was earlier rejected by a special court following which she filed an appeal before the Mumbai High court.

In her bail petition, Rhea Chakraborty alleged that Sushant Singh Rajput "took advantage of those closest to him to sustain his drug habit" and that she and her brother are the sole targets of a witch hunt.

Following the bail announcement, Rhea's lawyer Satish Maneshinde in a statement said that, "We are delighted by the order of the Hon'ble Bombay High Court granting bail to Rhea Chakraborty. Truth and justice have prevailed and ultimately the submissions on facts and law were accepted by Justice Sarang V Kotwal".

Three federal investigative agencies are probing different angles in Sushant Singh Rajput’s death and Rhea is the main suspect in those as alleged by Sushant’s family.