Armenia Shares Video of 'Azerbaijani Tank' Being Destroyed in Karabakh 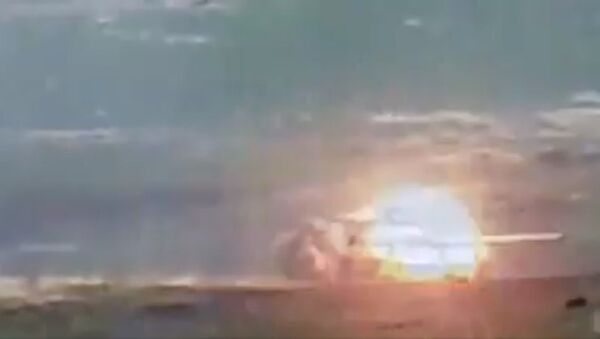 Evgeny Mikhaylov
All materialsWrite to the author
Clashes between Armenia and Azerbaijan in Nagorno-Karabakh have been going on for over a week, with the two sides accusing each other of aggression. Both Baku and Yerevan announced mobilisations and have published numerous videos of military vehicles destroyed in the area.

Armenia's Defence Ministry has published a video allegedly depicting the destruction of an Azerbaijani tank during recent clashes in Nagorno-Karabakh. In the footage, shared by MoD Press Secretary Shushan Stepanyan, the military vehicle explodes after receiving a direct hit, after which a cloud of smoke appears.

The Nagorno-Karabakh region, also known as Artsakh, declared independence from Azerbaijan in 1991, resulting in a conflict between Armenian and Azerbaijani forces in 1992-1994. The war claimed thousands of lives, also forcing over a million people to flee the area before Moscow managed to mediate a ceasefire deal between Baku and Yerevan.

Karabakh has since remained an unrecognised state, while relations between Armenia and Azerbaijan are still tense as a result of the conflict.