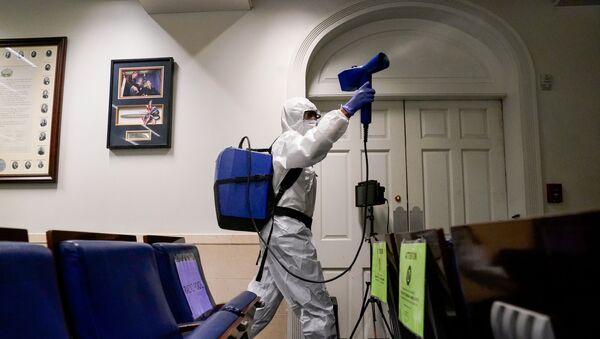 Footage of the curious incident was captured and subsequently shared on social media by reporters just a few hours after US President Donald Trump returned to the White House following a brief hospital stay over his positive COVID-19 diagnosis.

It’s unclear what specific cleaner was used to sanitize the designated areas; however, footage does show the substance being sprayed throughout the briefing room and the White House press area by an employee.

The shift in cleaning procedures marks a first for the White House, as employees had previously not opted to use such suits or spray maneuvers.

Erin Scott, a photojournalist working in the White House and on Capitol Hill, noted in a late Monday tweet that “after Trump returned to the White House with COVID-19, the same day Press Sec [Kayleigh] McEnany tested positive, we stumbled upon this in the briefing room.” 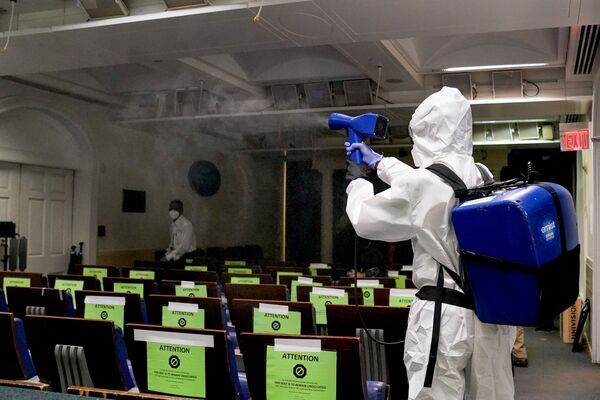 At present, over a dozen individuals among Trump’s family, inner circle and government advisers have tested positive for the novel coronavirus, with the most recent being top White House aide Stephen Miller, who noted in a statement that he is currently self-isolating.

With the White House slowly becoming a new hotspot for the respiratory disease, alarms recently sounded off after reports indicated that the administration would not be conducting contact tracing on all individuals who were present at the Rose Garden event for Judge Amy Coney Barrett, Trump’s nominee to fill the sole empty seat on the US Supreme Court.

At least 11 individuals who attended the September 26 event have tested positive for COVID-19.

In fact, congressional lawmakers submitted a letter Tuesday to Mark Meadows, the White House chief of staff, demanding that the Trump administration “release a total number of positive tests among White House personnel,” and that it expedite contact tracing so as to identify all individuals who have come in contact with the president, among other requests. 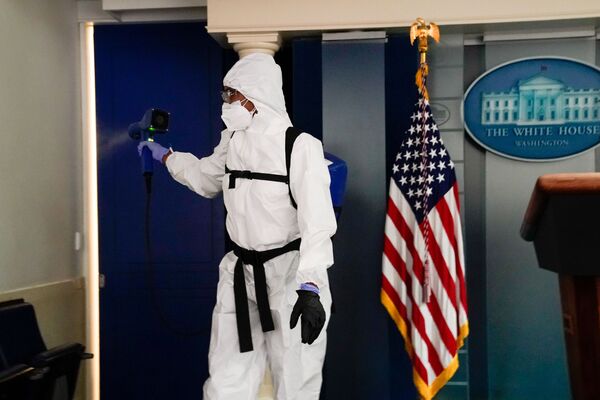 The New York Times’ Maggie Haberman recently reported that the White House “resembled a ghost town” on Tuesday, as many staffers have opted to stay home and self-quarantine.

“A culture of nervousness replaced a culture of negligence about precautions against the virus, led by Mr. Trump, that has infused the White House since March,” she wrote. “The White House communications and press shops were bereft of people.”

Citing sources familiar with the matter, Haberman indicated that a televised address to the nation was being considered by Trump, but that he was “still sounding somewhat short of breath in conversations.”

Trump returned to the White House late Monday after doctors determined that it was safe for him to do so, though he is not “entirely out of the woods” with regard to COVID-19, according to White House physician Dr. Sean Conley. Questions regarding the president’s health have only continued to surge after video footage of a photo-op outside the White House appeared to show Trump experiencing shortness of breath.

000000
Popular comments
This is the type of deep cleaning that took place in Moscow after visits from John Kerry, Rex Tillerson and Mike Poopeo. They used holy water to rinse out the evil, opened all the windows and invited Orthodox priests to drive out all the demons from the building.
4Justice
6 October 2020, 23:40 GMT4
000000
Put the pussy groper in a glass cage for 14 days or he will try to infect everyone in the WH whom he hasn't already infected.
amike
6 October 2020, 23:19 GMT2
000000
Newsfeed
0
New firstOld first
loader
LIVE
Заголовок открываемого материала
Access to the chat has been blocked for violating the rules . You will be able to participate again through:∞. If you do not agree with the blocking, please use the feedback form
The discussion is closed. You can participate in the discussion within 24 hours after the publication of the article.
To participate in the discussion
log in or register
loader
Chats
Заголовок открываемого материала
Worldwide
InternationalEnglishEnglishMundoEspañolSpanish
Europe
DeutschlandDeutschGermanFranceFrançaisFrenchΕλλάδαΕλληνικάGreekItaliaItalianoItalianČeská republikaČeštinaCzechPolskaPolskiPolishСрбиjаСрпскиSerbianLatvijaLatviešuLatvianLietuvaLietuviųLithuanianMoldovaMoldoveneascăMoldavianБеларусьБеларускiBelarusian
Transcaucasia
ԱրմենիաՀայերենArmenianАҧсныАҧсышәалаAbkhazХуссар ИрыстонИронауОssetianსაქართველოქართულიGeorgianAzərbaycanАzərbaycancaAzerbaijani
Middle East
Sputnik عربيArabicArabicTürkiyeTürkçeTurkishSputnik ایرانPersianPersianSputnik افغانستانDariDari
Central Asia
ҚазақстанҚазақ тіліKazakhКыргызстанКыргызчаKyrgyzOʻzbekistonЎзбекчаUzbekТоҷикистонТоҷикӣTajik
East & Southeast Asia
Việt NamTiếng ViệtVietnamese日本日本語Japanese俄罗斯卫星通讯社中文（简体）Chinese (simplified)俄罗斯卫星通讯社中文（繁体）Chinese (traditional)
South America
BrasilPortuguêsPortuguese
NewsfeedBreaking
11:14 GMTPunjabi Activists Clash With Police in Delhi During Anti-Farm Law Protests - Video
11:07 GMTClip of Man With Crossbow on Balcony in Netherlands Emerges Online Amid Reports of Stabbing Attack
10:48 GMTTwo Killed, One Injured in 'Crossbow Attack' in the Netherlands
10:44 GMTAUKUS Raises Many Questions From Point of View of Nuclear Proliferation, Russia's IAEA Rep Says
10:44 GMTUK-US Post-Brexit Trade Deal Unlikely If Northern Ireland Peace Accords Destroyed, Pelosi Says
10:41 GMTAUKUS Will Make Indo-Pacific Fiercely Contested, Sinologist Says
10:40 GMTOxbridge Fails to Top Times' List of Best UK Universities for First Time
10:39 GMTLa Francophonie Suspends Guinea From Organisation Over Military Coup
10:24 GMTRussian Online Voting System Suffers DDoS-Attack Coming From US, German, Ukrainian IPs
10:21 GMTPutin: US and NATO Countries Should Provide Most of Money for Post-War Afghan Reconstruction
09:58 GMTPutin to Vote Online in Elections to Russian Parliament
09:51 GMTTwo Charged With New IRA Murder of Blogger Lyra McKee In Northern Ireland In 2019
09:13 GMTPrince Andrew Dealt Blow After US Judge Rules That Sex Abuse Lawsuit Isn't 'Game of Hide and Seek'
08:31 GMTCosmic Rerun? 10 Billion-Year-Old Supernova Will Soon Appear Again - Scientists Reveal Why
08:20 GMTAs Sweden Tries Nouri Over Iran 'Prison Massacre', Analyst Calls Case Groundless
07:48 GMTSCO Summit: Putin Calls for Common Line on Afghanistan in Wake of US 'Flight'
07:22 GMTPsaki Says Biden's Constant Coughing Not 'an Issue of Concern'
07:11 GMTIndia Eyes Record Vaccination on PM Modi's Birthday, But Opposition Observes It as Unemployment Day
07:06 GMTIndia Doesn't Subscribe to 'Clash of Civilisations' Theory, Jaishankar Clarifies to China's Wang Yi
06:59 GMTUN Chief: 'Absolutely Essential' to Create Mechanisms to Inject Cash Into Afghan Economy