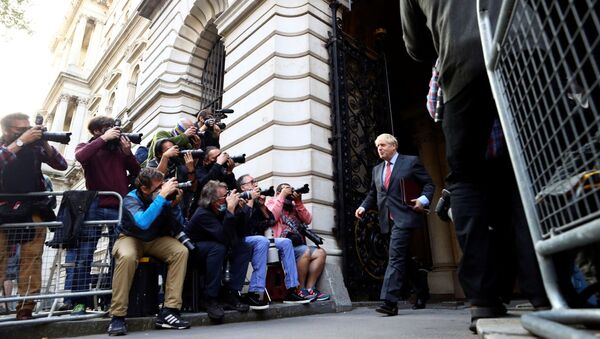 Lilia Dergacheva
All materialsWrite to the author
Boris Johnson's late-evening coronavirus curfew for pubs and eateries, as well as a limit on people gathering in public spots, have long landed in many’s crosshairs, as people were shown jamming the streets after the curfew hour, storming public transport, and other similar activities.

Rebel Conservatives, who last week managed to force the government to hand MPs a vote on future national lockdowns before they take effect, said that they could muster the necessary 43 Tory MPs to vote along the same lines as Labour to overturn the anti-coronavirus measures introduced in late September - namely 10 p.m. curfews and a ban on over six-strong gatherings, The Telegraph reported.

"My sense is that a material number of MPs might vote against the 10 p.m.", a source told the British edition, with another asserting that even if Labour backtracks, the Conservative MPs will persist in their effort:

"If it transpires that Labour is going to oppose it, then I would think there would be enough of us who would be inclined to vote against it", the source commented.

Agreeing with the scenario, Steve Baker, the former Brexit minister who last week acted as an unofficial whip for Tory rebels, indicated that "very few members of Parliament have constituencies which will bear voting against every infringement of liberty". He also acknowledged there is a "growing consensus" that neither measure, the 10 p.m. curfew nor including children in the "rule of six" - is well-evidenced, adding he expects quite a few MPs to take aim at them.

Sir Graham Brady, who is reportedly among those set to rebel against the new rules, told the BBC that patience with the government's local lockdown restrictions is starting to "wear thin".

Sir Desmond Swain, a senior Conservative MP, for his part, fumed that a curfew is a "fatal mistake" since "it's absurd" to slap it across the country already stricken with the fallout from the first wave of the pandemic.

Regardless of the definitive stance taken by some Tories, it is unclear if Labour will indeed move against the measures. For instance, on Monday night, Jonathan Ashworth, Labour's shadow health secretary, refused to say whether the party would support the 10 p.m. curfew.

He told The Telegraph: "The government needs to produce public health evidence for this measure, because what we see at the moment are pictures of people leaving pubs at the same time, crowding onto trains, buses, and trams, sometimes even crowding into supermarkets to stock up on extra drinks. How does it contain the spread of the virus?"

A source close to the Labour whip's office stressed that they have been "clear that we support the government on their measures", admitting though that they haven't so far "seen them and have not made a hard and fast decision".

The lockdown restrictions are expected to be voted on twice in England over the next 48 hours – Tuesday night will see a yes/no vote on the "rule of six", which limits gatherings to a maximum of six people and went into effect on 14 September. The second one is expected to be on Wednesday and it will centre around the curfew hours.

Is Austerity Coming Back? Rishi Sunak Says He Has ‘Sacred Responsibility’ to Balance the Books

On Monday, Chancellor Rishi Sunak commented on the 10 p.m. curfew, introduced on 24 September: "Everyone is very frustrated and exhausted and tired about all of this".

Asked whether PM Boris Johnson agreed with his chancellor, the PM's official spokesman said: "He does understand the frustrations of the public", adding that it proved to be "a very tough balance" to keep the healthcare crisis at bay while at the same time keeping the economy moving.

The debate comes as UK public health authorities said on Sunday evening that 15,841 coronavirus cases detected between 25 September and 2 October were left out of the nation's daily corona rates due to a glitch that was identified on Friday night and later resolved. The reported incident has since spawned calls for Diana Mary "Dido" Harding, the head of the UK National Health Service's COVID-19 Test and Trace programme, to resign. After the update, the total number of coronavirus cases in the United Kingdom climbed to 502,978, with the death toll reaching 42,350, according to health authorities.

The government's measures, despite them being targeted at curbing the rising corona rates, have attracted scrutiny since they were updated, as large crowds of partying people have been seen at the entrance to metro stations and at bus stops right after the curfew hour. Different political groups have since taken aim at the new rules, suggesting they are ineffective and should be revised.