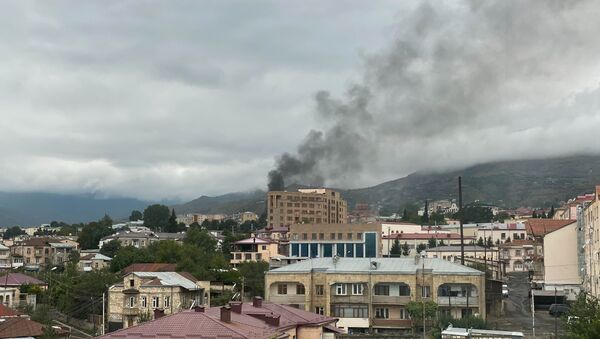 Subscribe
The mainly Armenian-populated Nagorno-Karabakh region declared its independence from Azerbaijan in the 1990s, which led to a major conflict between Yerevan and Baku, that lasted until 1994. A new round of clashes broke out slightly over a week ago when the sides accused each other of violating the ceasefire along the line of contact.

The clashes between Armenian and Azerbaijani forces in Nagorno-Karabakh continue for a ninth consecutive day, with both sides claiming they've inflicted harsh damage on the adversary and publishing numerous videos of destroyed enemy military vehicles and drones.

STEPANAKERT (Sputnik) - The unrecognized Nagorno-Karabakh Republic (NKR) is against Turkey's mediation in the talks, the NKR Foreign Ministry said in a statement.

Earlier, Azerbaijani President Ilham Aliyev said Turkey should be present in the settlement of the Karabakh conflict.

"Once again, we firmly declare the principled position of the Republic of Artsakh [Karabakh] regarding the inadmissibility of Turkey's participation in any form in international mediation efforts within the framework of the peaceful settlement of the Azerbaijani-Karabakh conflict," the statement said.

"The criminal actions of Turkey, which commands and controls the armed aggression against the Republic of Artsakh, supplies weapons to Azerbaijan for waging war and recruits militants of terrorist organizations from the Middle East to take part in hostilities, make impossible its further membership in the OSCE Minsk Group," the ministry said.

STEPANAKERT (Sputnik) - The Foreign Ministry of the unrecognized Nagorno-Karabakh Republic welcomed the efforts of the OSCE Minsk Group to establish peace in Karabakh.

Earlier, the leaders of Russia, the United States and France - countries co-chairs of the OSCE Minsk Group - called for an immediate cessation of hostilities in Nagorno-Karabakh. Presidents Vladimir Putin, Donald Trump and Emmanuel Macron expressed their condolences to the families of those killed and wounded. The leaders called on Yerevan and Baku to pledge to resume negotiations without conditions.

"On 6 October, at around 21:00 [17:00 GMT], the Armenian Armed Forces launched rockets on the part of the Baku-Tbilisi Ceyhan oil pipeline passing through the territory of the Yevlakh region. The oil pipeline occupies a special place in the European energy security, is the largest strategic project in the region. As a result of the decisive measures of our army, this attempt of terror was suppressed," the office said.

Yerevan is ready to make concessions in the conflict over Nagorno-Karabakh in case of similar readiness on the part of Azerbaijan, Armenian Prime Minister Nikol Pashinyan said.

"Conflicts need to be resolved on the basis of mutual concessions. Nagorno-Karabakh is ready, and Armenia is ready, to mirror the concessions that Azerbaijan is ready to make", Pashinyan told AFP in an interview.

The UN Children’s Fund (UNICEF) said in a statement on Tuesday that it is aware of reports of four children killed and seven more injured during hostilities in the area of Nagorno-Karabakh.

“It is now 10 days since violence escalated dramatically in the Nagorno-Karabakh conflict zone. There are already reports of four children killed and seven injured, and without an end to the fighting, these figures will tragically increase”, UNICEF said.

It urged all parties to protect civilians and civilian infrastructure from further harm, in line with international and humanitarian law. “An immediate cessation of hostilities is in the best interest of every child”, UNICEF added.

Russian Foreign Minister Sergei Lavrov and his Iranian counterpart, Mohammad Javad Zarif, had a phone conversation, during which they expressed concern over the unprecedented escalation in the Nagorno-Karabakh conflict zone, the Russian Foreign Ministry said on Tuesday.

"Serious concern of Moscow and Tehran was expressed about the unprecedented escalation in the zone of the Nagorno-Karabakh conflict. The danger of the involvement of radical militants of illegal armed groups from Syria and Libya in it was emphasized", the statement says.

Lavrov pointed to the intensive efforts of Russia both in its national capacity and within the framework of the OSCE Minsk Group co-chairs for the early establishment of peace in the region. The ministers again emphasized the important role that the neighbouring countries of Azerbaijan and Armenia could play in this.

The parties agreed to maintain further contacts, the ministry added.

Air raid sirens have gone off again today in the capital of the unrecognised Republic of Artsakh (Republic of Nagorno-Karabakh), a Sputnik correspondent reports.

"German Chancellor Angela Merkel spoke with Turkish President Recep Tayyip Erdogan via video conference today ... In connection with the conflict between Armenia and Azerbaijan, the Chancellor called for a ceasefire and negotiations in the OSCE Minsk Group aimed at significant progress", the German government said in a statement.

Merkel also "spoke in favour of quick steps towards the agenda for the further development of relations between the EU and Turkey" and stressed the need to "further reduce regional tensions in the Eastern Mediterranean", the statement says.

Russia is very actively engaged in resolving the ongoing escalation between Armenia and Azerbaijan in Nagorno-Karabakh, Kremlin Spokesman Dmitry Peskov told reporters on Tuesday, saying it was difficult to imagine more active steps for the settlement.

"It is difficult to imagine more active steps than now", Peskov said, when asked if Moscow plans to engage more in the conflict settlement.

The spokesman added that Russia’s efforts are directed at helping the warring sides cease violence.

"Russia is one of the countries that can mediate in the settlement of this conflict", Peskov said.

According to the Kremlin spokesman, the situation on the ground is currently deteriorating, and it is unacceptable.

"We remain extremely concerned about what is happening. And we believe that the parties must cease fire and sit down at the negotiating table", Peskov said.

According to Baku, Armenia has used mercenaries from Syria and Iraq in the Karabakh clashes.

"Canada and the United Kingdom reiterate the urgent need to end the continuing military action in and around the Nagorno-Karabakh conflict zone", Foreign Secretary Dominic Raab said in a joint statement with Canadian Foreign Minister François-Phillippe Champagne.

"According to the Artsakh [Nagorno-Karabakh Repulic] Defence Army, around noon, the Azerbaijani Armed Forces launched a large-scale offensive in the southern part of the line of contact between Artsakh and Azerbaijan, using reserve forces, and a large amount of military equipment, including tanks and artillery. The enemy also ignores the security of the territory of the Islamic Republic of Iran", press secretary of the Armenian Minister of Defence Sushan Stepanyan said.

According to Vagram Pogosyan, press secretary for the president of the self-proclaimed Nagorno-Karabakh Republic, Baku has mounted a powerful offensive, and the Azerbaijani forces have already lost some troops and military vehicles.

YEREVAN (Sputnik) - Armenian Prime Minister Nikol Pashinyan paid a visit to the unrecognized Nagorno-Karabakh Republic and held talks with the local armed forces there, the Armenian cabinet said on Tuesday.

"On 5 October, Pashinyan paid a visit to the Republic of Artsakh [Karabakh]. The prime minister held talks with Artsakh President Arayik Harutyunyan and top officers of the armed forces," the cabinet said in a statement.

According to the Armenian parliament, the commander of the Karabakh army, Jalal Harutyunyan, briefed Pashinyan on the current operation in Karabakh, counterattacks on the enemy, and the armed forces' plans.

"Turkey's regional policy, which is exclusively aimed at peace, is already producing results in the Middle East and in the Caucasus. Today, the situation that emerged due to another Armenian attack, shows once again that Turkey has prestige in the region and in the world. Of course, it makes us stronger, it inspires us. Today, our peoples and the whole world see what the Turkish-Azerbaikani alliance means", Azerbaijani President Ilham Aliyev said, as quoted by his press service.

"The minister has instructed the Azerbaijani army with planning attacks on military and strategic infrastructure located on the enemy's territory, using the available weapons with great destructive power", the Azerbaijani Defence Ministry said in a statement.

At least eight blasts were heard in Stepanakert on Tuesday after air sirens sounded, a Sputnik correspondent says.

UPDATE | Published by the Foreign Ministry of the unrecognised NKR, the video shows the consequences of the shelling of #Stepanakert #SputnikUpdates https://t.co/vGvCViG421 pic.twitter.com/V4GF4BKhYN

"Of course, Turkey and the Turkish people are ready to provide assistance to Azerbaijan in any area where it needs our help. This is what [Turkish] President [Recep Tayyip] Erdogan says, this is what we explain on our platforms", Cavusoglu said, as quoted by Aliyev's press service.

According to the statement, Cavusoglu also said that the Minsk Group of the Organisation for Security and Co-operation in Europe had no "clear plans and mechanisms" for settling the Karabakh crisis.

YEREVAN (Sputnik) - The Armenian Foreign Ministry on Tuesday pointed to the need to immediately cease fire in Karabakh and warned against trying to settle the conflict militarily.

"Armenia confirms the need to immediately cease fire ... We stress once again that there is no alternative to a peaceful settlement of the conflict and to the peace process, and any attempt to settle it militarily will be resolutely curtailed", the Armenian Foreign Ministry said in a statement.

The ministry also praised a statement by the foreign ministers of the Organisation for Security and Co-operation in Europe's Minsk Group member states, who condemned attacks on the civilian population and infrastructure in Nagorno-Karabakh, and called it a threat to regional security.