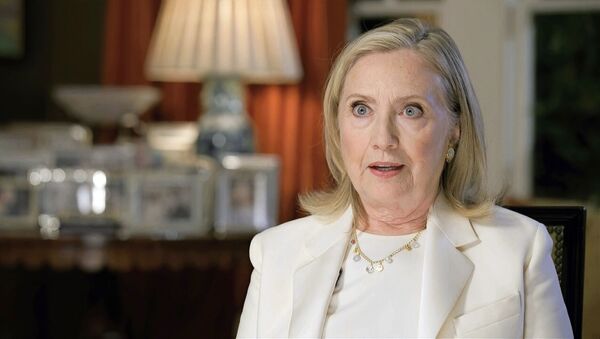 Daria Bedenko
All materialsWrite to the author
US President Donald Trump has been long accused by Democrats - who were stunned by his unexpected victory in the 2016 presidential election - of "colluding" with the Russian government. No direct evidence has been found to back the allegations.

According to the report, Ratcliffe orally briefed then-President Barack Obama on Clinton's alleged plan, which had an alleged goal of distracting the American public from the ongoing scandal around her private e-mail server.

“We’re getting additional insight into Russian activities from [REDACTED],” Brennan's notes read, adding, “CITE [summarizing] alleged approved by Hillary Clinton a proposal from one of her foreign policy advisers to vilify Donald Trump by stirring up a scandal claiming interference by the Russian security service”.

NEW: declassified @JohnBrennan notes from briefing @BarackObama per @DNI_Ratcliffe
“Alleged approved by @HillaryClinton a proposal from one of her foreign policy advisers to vilify @realDonaldTrump by stirring up a scandal claiming interference by the Russian security service.” pic.twitter.com/IiVb4XlGke

Fox News said that Ratcliffe shared some "newly-declassified information" with the Senate Judiciary Committee alleging that US intelligence officials "forwarded an investigative referral on Hillary Clinton purportedly approving 'a plan concerning US presidential candidate Donald Trump and Russian hackers hampering US elections in order to distract the public from her email scandal".

“Per FBI verbal request, CIA provides the below examples of information the CROSSFIRE HURRICANE fusion cell has gleaned to date," the heavily-redacted memo stated, adding, "An exchange [REDACTED] discussing US presidential candidate Hillary Clinton’s approval of a plan concerning US presidential candidate Donald Trump and Russian hackers hampering US elections as a means of distracting the public from her use of a private email server."

​According to Fox News, Ratcliffe informed the Committee last week that the Obama administration had received Russian intelligence with similar allegations against Clinton, noting that it was not treated as "Russian disinformation".

Other, unnamed, sources claiming to be familiar with the situation asserted to Fox News that the documents were not disinformation, suggesting that "even Brennan knew, or he wouldn't be briefing the president of the United States on it".

The FBI had been investigating Trump in 2016 over allegations of "collusion" with the Russian government. However, not only did it find no direct evidence to back the allegations sparked by Trump's Democratic rivals, but ex-FBI head James Comey recently admitted that "embarassing" mistakes were made during the investigation.

Democrats, including Clinton, have long alleged that Trump collaborated with Moscow to be elected. However, US Special Counsel Robert Mueller, who looked into the case, said there was no direct evidence that pointed to "collusion" between Trump and Russia.

The Kremlin has also repeatedly dismissed the allegations of a connection between the Trump campaign and Russia.