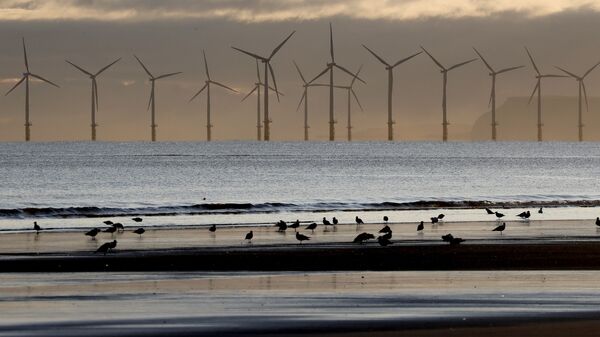 Chris Summers
All materialsWrite to the author
Britain, by virtue of its long and often gale-hit coastline, is already the world’s leading producer of offshore wind power. Currently enough energy to power 4.5 million homes is produced by offshore wind turbines in the UK.

He says he wants more offshore wind farms to increase the amount of energy produced from 30 to 40 gigabytes by 2030.

It is a remarkable about-turn by the Prime Minister who in 2013 famously said: "Wind farms couldn't pull the skin off a rice pudding."

​Johnson told the Conservative Party conference on Tuesday, 6 October: "As Saudi Arabia is to oil, the UK is to wind - a place of almost limitless resource, but in the case of wind without the carbon emissions and without the damage to the environment."

He said: "Far out in the deepest waters we will harvest the gusts, and by upgrading infrastructure in places like Teesside and Humber and Scotland and Wales, we will increase an offshore wind capacity that is already the biggest in the world."

Great news that the guy who built us that bridge to Ireland and that airport on an island has such an ambitious plan for wind power!

​Britain already has dozens of offshore wind turbines, mostly off the north and east coast of England and Scotland.

The ruling Conservative Party is using the slogan "Build back better” and Johnson will explain more about what those words mean.

Ironically his speech is set to include the term "green industrial revolution" which was originally coined by Rebecca Long-Bailey, the Shadow Energy Secretary under opposition leader Jeremy Corbyn.

Problem with Boris Johnson's promises about building more wind turbines is that through his career he's built up a long list of promises but built very little.

Bridges, airports... he hasn't even managed the statute on the 4th plinth in Trafalgar Square he used to call for.

​The party conference is being held entirely online because of the pandemic but Johnson will tell his audience: "Your kettle, your washing machine, your cooker, your heating, your plug-in electric vehicle - the whole lot of them will get their juice cleanly and without guilt from the breezes that blow around these islands."

Most of Britain’s offshore wind turbines are currently manufactured in Germany or Denmark, although Siemens has opened a factory in Hull and others are set to follow.

UK economy is about to become literally dependent on thin air. https://t.co/AjYU1f4Nzl

​If more wind turbines are built in Britain it will boost the UK steel industry, which has been struggling for years.

The Liberty House Group, owned by Indian industrialist Sanjeev Gupta, has reopened two Scottish steel mills - the Dalzell plate mill in Motherwell and the Clydebridge plant in Cambuslang - in 2016 to produce steel to build wind turbines.

We will become the world leader in low cost, clean power generation.

In ten years time, offshore wind will be powering every home in the country. #BuildBackBetter #CPC20 pic.twitter.com/8mkWrQwknX

The firm currently recycles three million tonnes of scrap steel a year, mainly in Australia, and is investing in similar technology in order to recycle large quantities of steel in Britain and the US.

On Tuesday, Mr Gupta put out a statement in which he said: "We welcome the Prime Minister’s full-blooded commitment to develop the offshore wind sector as the launchpad for a thriving low carbon economy."

He said: "GFG Alliance’s renewable energy development is at the heart of our vision for a green UK steel industry ready to compete globally and generate highly-skilled, green collar jobs in industrial communities.
To deliver the prize of a new generation of green jobs it is critical that the commitment to offshore wind is accompanied by a wider green, targeted procurement strategy that backs British foundation industries."

Mr Gupta concluded: "By directing investment appropriately and lowering uncompetitive UK energy costs, the Government can encourage inward investment and stimulate a market for UK steel products that will generate tens of thousands of jobs and launch a green infrastructure-led recovery from the damage caused by the Covid-19 pandemic."