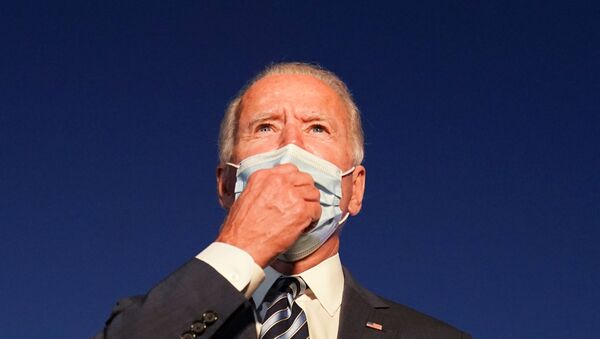 Evan Craighead
All materialsWrite to the author
Democratic presidential nominee and former US Vice President Joe Biden appears to have changed his opinion on the slated October 15 debate against US President Donald Trump, telling reporters that the next debate will be contingent on 45's COVID-19 novel coronavirus test results.

"If he still has COVID we shouldn’t have a debate," Biden told reporters on the road with him, as reported by Reuters.

The former vice president's Tuesday evening comments appear to conflict with remarks he delivered to reporters before boarding a Florida-bound plane Tuesday morning.

"If the scientists say that it's safe and the distances are safe, then I think that's fine," said Biden to reporters, according to CBS News. "I'll do whatever the experts say is the appropriate thing to do."

Dr. Sean Conley, Trump's personal physician, detailed on Monday that the US president "may not be entirely out of the woods yet" when it comes to his COVID-19-related illnesses.

Nevertheless, Trump continues to assert that he is in great health and is up for next week's debate against Biden in Miami, Florida.

Speculation surrounding the president's health has persisted since he left the Walter Reed National Military Medical Center in Bethesda, Maryland, on Monday.

Despite Trump's upbeat social media presence, many, including local emergency care physician Dr. J. Randall Curtis, speculate Trump likely received the steroid dexamethasone because he had, or still has, pneumonia.

“So I haven’t seen his chest X-rays,” said Curtis to Seattle, Washington, outlet KIRO 7. “But in general, and for most patients, if they need oxygen, it’s because the COVID is in the lungs and causing pneumonia.”

“If you look at all patients who have been hospitalized with COVID, the ones who don’t need oxygen actually don’t seem to benefit from dexamethasone. In fact, there may even be some harm. But if they need oxygen and have pneumonia, then dexamethasone has been shown to have some benefit in improving survival.”

The upcoming Wednesday debate between US Vice President Mike Pence and Democratic vice-presidential nominee Sen. Kamala Harris (D-CA) ran into other health-related concerns on Tuesday, as the vice president's team argued that the addition of plexiglass barriers between the debaters was unnecessary.

Marc Short, Pence's chief of staff, told the Associated Press that the vice president "will be there," because the debate is “too important for the American people.”

Pence's press secretary released a memo from US Centers for Disease Control and Prevention Director Dr. Robert Redfield that noted the vice president "is not a close contact of any known person with COVID-19."

Pence, Biden and Harris have all recently tested negative for the novel coronavirus.