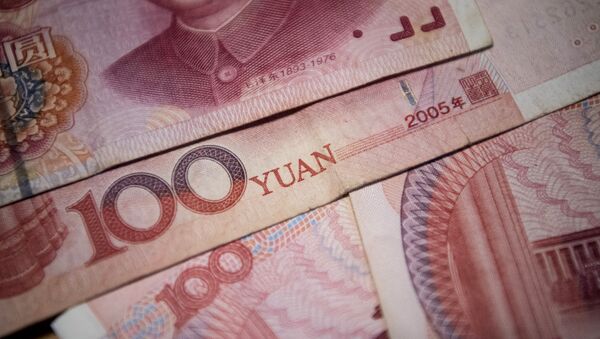 © AFP 2021 / FRED DUFOUR
Subscribe
The Chinese digital currency is undergoing internal tests, according to the deputy head of the Chinese Central Bank, Fan Yifei. However, a crypto yuan’s exact release date remains unknown. According to Fan, thorough testing in limited scenarios are needed to ensure the new product’s stability.

Cryptocurrencies have become one of the fastest growing assets this year. According to the Xinhua News Agency, the Bloomberg Galaxy cryptocurrency index has risen by 65%. For comparison, gold, the second-most profitable asset, has risen by a quarter. At the same time, Beijing has not yet legalised traditional decentralised cryptocurrencies; developing the digital yuan instead. Tests are currently underway in four pilot zones. If tests go well, the geography and applications will be expanded for the 2022 Beijing Winter Olympics.

Cryptocurrency emerged as a response to the 2008 financial crisis after many lost faith in the reliability of the traditional global financial architecture. Currently, there are thousands of cryptocurrencies and digital assets. Their main distinctive feature is their decentralization. Paradoxically as it sounds, blockchain technology, which came along with the first cryptocurrency, Bitcoin, allows achieving anonymity with complete transparency. On the one hand, it’s impossible to identify the owner, since the data is encrypted. On the other hand, the system  provides transparent accounting of all transactions, so that, for example, it is impossible to carry out the same transaction twice, or pretend that there was no transaction at all. According to early proponents of cryptocurrency, the lack of a single emission and processing centre was supposed to ensure its reliability: there is no structure capable of taking away a cryptocurrency, or artificially devaluing or freezing it. At the same time, users are protected against dishonesty, since the blockchain allows any user to access a list of all transactions to ensure that everything is recorded correctly.

However, in practice, such a system has turned out to be inconvenient for real-life transactions. First, classic blockchain requires huge computing resources, so transaction processing speeds are slow. Second, the prices of unregulated cryptocurrencies are volatile and a digital asset owner cannot protect themselves from financial risk. Finally, the anonymity inherent in cryptocurrencies has made it impossible to combat money laundering. Cryptocurrencies are often used for illegal transactions.

Although many countries, including China, have not yet legalised cryptocurrencies, some of their key features seemed useful. For example, if a regulator has a blockchain in their hands, they will be able to track almost any transaction in the economy. In theory, this means that cryptocurrency, if centralised, could help eradicate a shadow economy, increase tax collection, and better regulate the amount of money in circulation. It could help endow the Central Bank with powerful levers of control. Moreover, the specifics of information systems used when working with digital currency will make it possible to make a large number of transactions almost instantly anywhere in the world. This means that the technology is capable of making a breakthrough in the global financial system and cross-border payments. Finally, the problem of the population that doesn’t have access to banking services is being solved. All you need to use digital currencies is a digital wallet.

Since 2014, China has been actively working to create a national digital currency. According to a Bank for International Settlements study, at least 36 central banks of various countries were engaged in digital currency research by mid-2020. However, the Bank for International Settlements admits that China has advanced the most. Statements from authorities that the digital yuan is undergoing internal testing indicate that the product is ready to use. In some regions, bank clients were encouraged to create digital wallets and make digital currency transactions. In Suzhou, local officials received transportation compensation in digital yuan. It’s now important for China to conduct thorough tests in a confined space to smooth over the slightest imperfections, since on a national scale, any disruptions will lead to serious problems for the economy, He Xiaoyu, chief economist at Zhengxin Investment Group, said.

“The tests are aimed at avoiding possible problems when the digital currency is fully introduced into circulation. I believe that the tests should take a long time. After all, this is an important step towards reconciling modern technology and finance. Each step should be deliberate. Testing this process and changing people’s financial habits is quite difficult. So everything needs to be tested many times before being put into circulation.”

According to the Bank for International Settlements study, although digital currencies are designed to reduce the cost of financial services and make them accessible to the general population, national digital currencies development is best in countries with a mature traditional financial system and a high level of technology penetration. Therefore, it’s not surprising to some that China is currently leading in this area. China is the world’s largest mobile payments market and, last year, four out of five transactions were made using Alipay and WeChatPay. Chinese society is more ready to use digital currencies, the expert suggested.

“China is at the forefront of this process. Digital currency incorporates innovative technologies used by WeChatPay and Alipay payment tools. Many Western developed countries have faced obstacles because they believe that privacy issues are at stake. Some states, like Japan, have adopted Alipay to encourage Chinese people to spend more in Japan. As a result, part of the Japanese business started accepting these payment methods. In fact, the Chinese are very smart and quick to react to innovations. In the West, the market economy was formed long ago, which led to a certain model of consciousness and a conservative attitude towards innovative payment methods, such as digital currency. So I don’t think there are any technical problems here. It’s not that Chinese technology is more advanced. We are rather talking about the historical and cultural features.”

It is not known how the digital yuan will be implemented China in its final form. Judging by statements from Chinese Central Bank officials, at first it will replace cash in circulation but won’t necessarily require a bank account to use. It will be enough to have a smartphone; one will be able to make transactions using the NFC technology, even without an internet connection. There is debate among experts about whether the digital yuan could be a challenge to the dollar’s hegemony in international settlements and become a new global currency. Deutsche Bank analysts note that using digital yuan could eliminate the need to use SWIFT, which would give the yuan a chance to become an international reserve currency. Deutsche Bank noted that the dollar became a reserve currency thanks to its use for trading in raw materials. The current changes faced by the financial system could lead to a complete change in global currency markets.A

A yuan internationalisation remains hampered not only by external, but also by internal reasons, such as the lack of free conversion of Chinese currency, as well as control over capital flow. If Beijing successfully tests and launches its own digital currency, however, it could be an important innovation in global finance and become an example for other countries. If the world gradually digitizes money, the existing financial system model could transform in a natural way.

000000
Popular comments
Time for Iran, Venezuela, Russia, et all to jump on board here and dump SWIFT and the petrodollar.