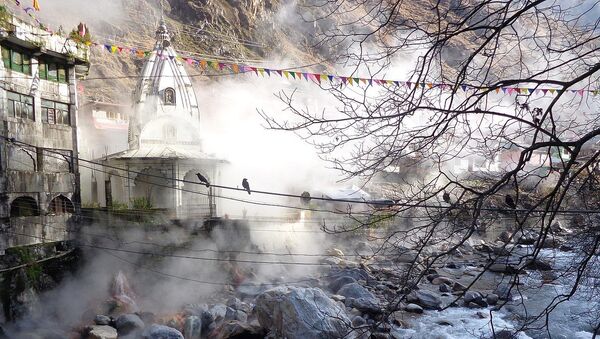 Radhika Parashar
All materialsWrite to the author
A little over 500 kilometres away from India’s capital New Delhi, lies the charming town of Manikaran in the foothills of the Himalayas. Along with the snow-capped hills and rivers that grace the aesthetically rugged landscape, an ancient temple of the Hindu god Shiva makes for a major tourist attraction, especially in the fall.

A shrine of Lord Shiva is situated at the height of 7,956 feet above sea level, in the snowy Kullu district of Himachal Pradesh. It is a significant spiritual destination for Shiva worshippers because mythology tells of the deity having walked the lands of Manikaran along with the Goddess Parvati.

If mythological stories are to be believed, Lord Shiva and his divine consort Goddess Parvati were wandering in the area when the deity decided to meditate. Parvati, in turn, started taking a bath in the blue waters and soon after, she lost a jewel from her earring.

Video of Ancient, Hidden Temple of Lord Shiva in Kenya Goes Viral on Twitter in India
Lord Shiva, who was on the verge of performing Tandav – his dance of destruction, was enraged as he was unable to find the earring. Just as the atmosphere grew even more tense, a large serpent swimming in the river fished the jewel out from the waters and calmed the god down.

Thus the river came to be known as Parvati and the place was called Mani (jewel) Karan (ear), and tales suggest the holy couple stayed in Manikaran for 1,100 years before returning to their abode in the Himalayan Mount Kailash.

Because of the hot enchanting water springs in the Beas and Parvati rivers surrounding the otherwise snow-covered area, mist keeps clouding the temple making it look heavenly. Now that winter is coming, netizens who missed out on getaways due to the coronavirus have been tripping on videos of the serene temple.

Situated at the height of 2650mt, in Kullu district, the Manikaran Shiva Temple gives an inclusive mental & spiritual fulfilment to devotees.

Every visitor is amazed to get freezing water in d Parvati River on d one side & boiling hot water spring on d other.#IncredibleHimachal https://t.co/99erepHPca

Tag Your Friends with whom you wanted to go here ♥️ . . . . . DM for credit . . . . . ....#landscape#oldmanali#parvativalley#your_shotindia#travelrealindian#indianphotography#indianpicture#landscapephotography#beautifulhimachal#rainyseason#wanderers#manikaran#kasol❤️#trending

The waters in the hot springs are considered sacred, and worshippers are known to dip small cloth bags filled with rice grains into the boiling waters and pull back cooked rice that is distributed as blessed offerings among the visitors.

Another story around the birth of Manikaran, as believed by the Hindus, suggest that human life was resurrected in the area after a catastrophic flood wiped off humanity from the face of the earth.

Sadly, there is noone living to testify the authenticity of these mythological stories, but people who visit the temple here claim to have an overwhelming feeling of calmness and composure.

Nevertheless, the quaint town witnesses a heavy footfall from national, international travelers every year where wanderers and devotees reach for a pleasant getaway and try to get in touch with their spiritual selves.