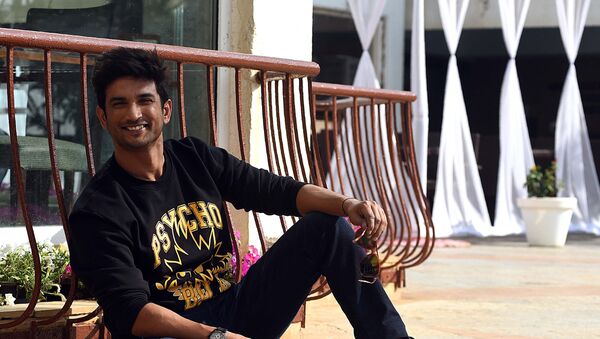 Dhairya Maheshwari
All materials
The investigation into the alleged suicide of Bollywood actor Sushant Singh Rajput was handed over to India’s top probe body CBI after a ruling by the country’s apex court in August. Sushant was found hanging from a ceiling fan at his Mumbai flat on 14 June.

Sushant's sister Shweta Singh Kirti took to Twitter on Monday to demand an explanation into what she termed a "U-turn". The reference was to AIIMS panel head Dr Sudhir Gupta, who had been heard speculating that the actor's death was a case of alleged murder in a leaked audio recording before the forensic findings were released.

The comments by Sushant's sister came after it was learned that a five-member forensic team, led by Dr Gupta, reportedly found no injuries on Sushant's body other than that of hanging.

In an interview with the news channel India Today on Sunday evening, Dr Gupta also said the doctors found no marks of a struggle on Rajput's body or clothes.

In one of her social media posts, Sushant’s sister Kirti cited the leaked audio recording of Dr Gupta, as reported by Republic TV, to buttress the claim that Sushant didn't commit suicide.

In the audio tape, Dr Gupta could be heard alleging that Sushant might have been "murdered".

Republic TV reported that the audio recording was from an earlier date, before the Dr Gupta-headed medical panel came out with its medical report on Sunday.

Singh said he would demand the country’s apex probe agency Central Bureau of Investigation (CBI) to constitute another forensic team.

Highly perturbed with AIIMS report. Going to request CBI Director to constitute a fresh Forensic team . How could AIIMS team give a conclusive report in the absence of the body,that too on such shoddy post mortem done by Cooper hospital wherein time of death also not mentioned .

​Ishkaran Singh Bhandari, another prominent lawyer who has been arguing on behalf of Sushant’s family on television debates, noted that he had been in touch with Dr Gupta in the lead-up to the forensic report being released by AIIMS.

Not Surprised at what Repuplic showed.

Dr Sudhir Gupta had talked to me also & had many suspicions on Mumbai autopsy.

Why did he change & did opposite, needs investigation.

Good that @republic has recorded him.

​Meanwhile, governing Bharatiya Janata Party (BJP) MP Subramanian Swamy on Monday also questioned the veracity of the forensic team probe, which he noted had been conducted without Sushant's corpse.

Ishkaran Bhandari has worked for past few days on the Dr. Gupta somersault. He will meet media soon. Now CBI should do the inevitable: Register an additional FIR with murder u/s 302. Yesterday I urged as a member of the Standing Committee of Parliament on Health to examine this