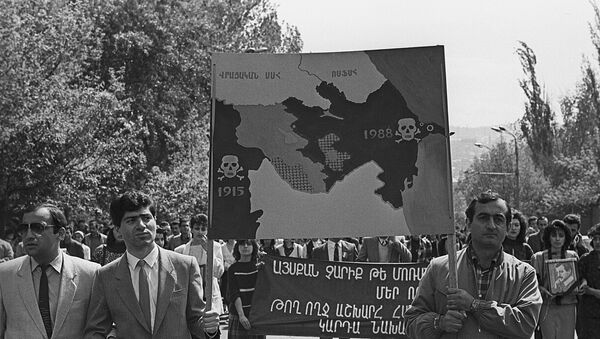 © Sputnik / Рубен Мангасарян
/
Go to the photo bank
Subscribe
Ilya Tsukanov
All materialsWrite to the author
On September 27, the frozen war between Armenia and Azerbaijan over the breakaway region of Nagorno-Karabakh exploded into large-scale clashes. The conflict for the 4,400 square kilometer chunk of mountainous South Caucasus territory has its direct origins in the late Soviet period.

The flare-up of fighting in Nagorno-Karabakh entered its second week on Monday, with dozens of civilians and an unspecified number of servicemen ranging from dozens to hundreds or even thousands killed. Both sides have blamed each other for starting the bloodshed.

Until the mid-1980s, the Nagorno-Karabakh Autonomous Oblast (NKAO), an ethnic Armenian-majority region part of the Azerbaijani Soviet Socialist Republic of the USSR, lived in relative peace, with the estimated 145,600 Armenians and 42,900 Azeris constituting 76.4 percent and 22.4 percent of the population, respectively, and other nationalities, including Russians, Kurds, Greeks and Assyrians making up the rest. 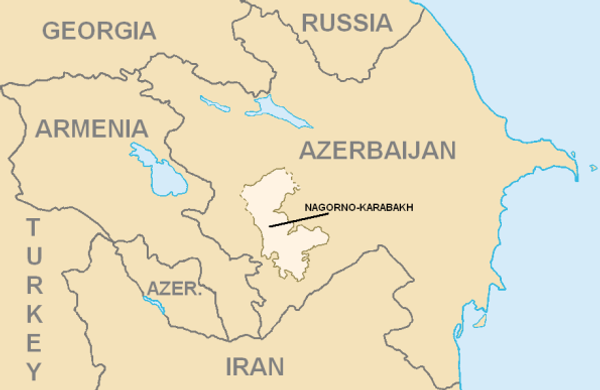 Throughout the Soviet period, any attempts to alter the NKAO’s status (including the idea of transferring the region to the Armenian Soviet Socialist Republic) were suppressed, despite quiet grumbling by some Karabakh Armenians, and Karabakh Azeris, who accused one another of political, social or economic discrimination, either within Azerbaijan or the NKAO itself. Formally, the rights of both nationalities were protected and guaranteed, both at the republican and regional levels and under the Soviet constitution.

From the mid-1980s onward, Soviet leader Mikhail Gorbachev’s policies of glasnost (‘openness’) and democratization dramatically weakened constraints on what could be said, written about and demanded in public, and nationalists on both sides would quickly begin to take advantage of the loosened restrictions. 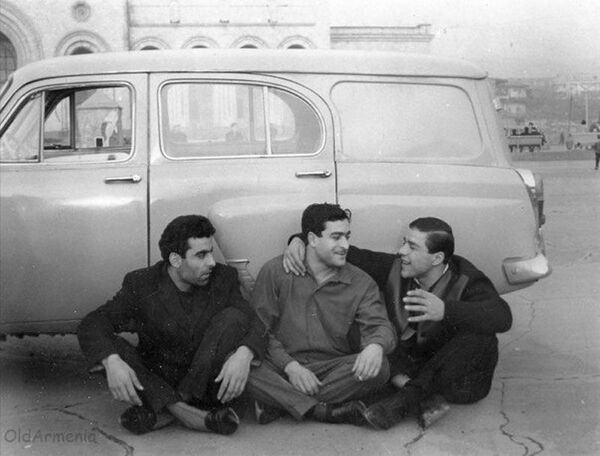 Three residents of Yerevan - an Armenian, a Jew and an Azeri, engage in conversation, 1963.
© Photo : OldArmenia

In 1987, Armenian civic organizers began a campaign to collect signatures to send to Moscow to lobby the Soviet leadership to alter Karabakh’s status. The same year, a rally in the Armenian capital of Yerevan included among its demands a call for Nagorno-Karabakh to become part of the Armenian republic.

Between 1987-1988, a deteriorating economic situation sparked by Gorbachev’s poorly-thought out reforms, which partially dismantled the Soviet planning system without replacing it with a functioning market economy, helped accelerate interethnic tensions, with Armenian nationalists accusing Baku of ‘deliberately’ keeping the region in a backward state, and of neglecting the rights, culture and identity of Armenians in Azerbaijan generally. Azeri nationalists, meanwhile, countered by accusing NKAO authorities of discrimination against them. 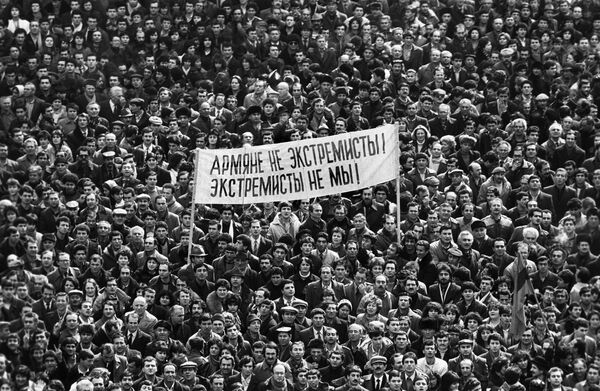 In February 1988, local authorities in the NKAO formally adopted a resolution requesting secession from Azerbaijan. After this, violent confrontations between Armenians and Azerbaijanis would start to take place on a regular basis. Shortly after the resolution was adopted, an attempt by Karabakh Azerbaijanis to prevent secession from taking place was put down, with televised reports about the deaths of two Azeris sparking an anti-Armenian pogrom in the city of Sumgait, Azerbaijan between February 27-29 which killed 32 Armenians.

Yegor Ligachev, a high-ranking member of the Politburo who started out as an ally to Gorbachev but became increasingly disenchanted with his policies as perestroika dragged on, would recall that the he saw Karabakh as “the first warning signal” about the dangerous explosive power of nationalism.

“We discussed the situation in Nagorno-Karabakh and the demands of Armenia and Azerbaijan many times at many early 1988 Politburo sessions,” Ligachev wrote in his memoirs, published after the Soviet collapse. “We reached a unanimous correct decision: it was impermissible to redraw national and territorial borders at that time. To violate that principle even once would open up a path for a multitude of bloody conflicts.”

In May 1988, Ligachev recalled, the Politburo decided on “tactical issues” in handling the Karabakh question, including replacing local party leaders in both Azerbaijan and Armenia, and sending members of the Politburo directly to the republics to get a sense of the situation on the ground and to issue directives on the impermissibility of any moves which would exacerbate tensions. Ligachev was sent to Baku, and Alexander Yakovlev, a senior Gorbachev advisor on issues ranging from national policy to détente with the US and political reforms, was sent to Yerevan. 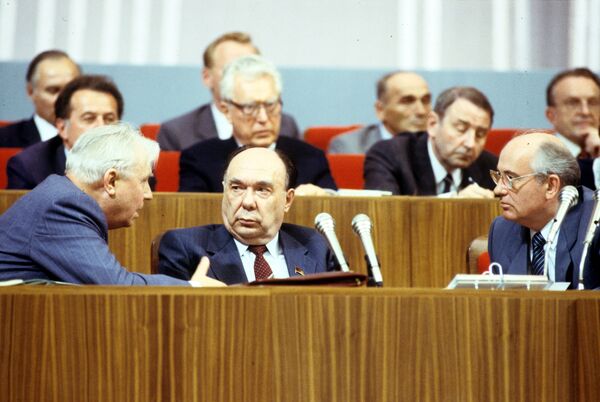 In Baku, Ligachev presented a Politburo decree on Nagorno-Karabakh, its basic point being that “we cannot resolve national issues by changing territorial borders without the republics’ consent. We must preserve the status quo. But…the lawful demands of every person, regardless of his nationality, must be fully satisfied.”

“The next day I presented this position to the plenum of the Azerbaijani Communist Party Central Committee. I had no doubts that Yakovlev would do exactly the same in Yerevan, since this was a decree of principle by the Politburo. But when I later saw Yakovlev’s speech at the plenum of the Armenian Central Committee, I discovered with amazement that he had completely ignored the problem of Nagorno-Karabakh. Yakovlev had much to say about the danger of conservatism. But not once did he even utter the name Nagorno-Karabakh, nor mention the center’s firm position on the question of national-territorial borders –as if that important document, or this burning problem, did not exist,” Ligachev recalled.

As historian Afrand Dashdamirov would later write, whereas Yakovlev expressed sympathy for the demands of Armenian nationalists and even spoke at one of their rallies, in Baku Ligachev called for the strengthening of the multinational nature of a Soviet state guided by ‘internationalism and friendship of peoples’, and condemned attempts by Azerbaijani nationalists to escalate tensions.

After the Soviet collapse, Ligachev and other senior Soviet officials, including former KGB chief Vladimir Kryuchkov, would accuse Yakovlev of being a CIA spy. Yakovlev was known to have taken part in a student exchange programme at Colombia University in 1958 alongside Oleg Kalugin, a former KGB general who fled to the West and who was later convicted of treason in his home country. Yakovlev fervently denied the allegations against him until his death in 2005. 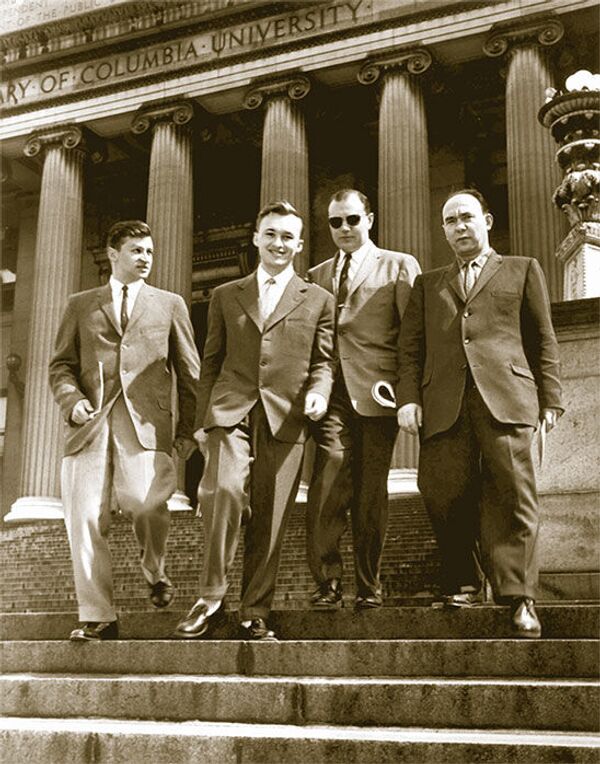 Autumn of Discontent Turns to Winter

In the fall of 1988, the situation in the Armenian and Azerbaijan republics continued to spill out of control, with minority communities in both republics subject to expulsions, attacks and pogroms, which prompted hundreds of thousands of people to flee their ancestral homes to escape the violence.

In early 1989, Moscow imposed a state of emergency in Nagorno Karabakh, with regular armed clashes beginning throughout the autonomy, and the region placed under the control of an emergency ‘special management committee’ headed by Arkady Volsky, a Russian.

In November 1989 however, Karabakh returned to Baku’s control as an autonomous region, and a state of emergency managed by Azerbaijani authorities was introduced in January 1990 when the republic’s internal troops were sent to the region, escalating the situation further. Soon after, local Armenian self-defence units began to form, and to arm themselves with vehicles, rocket launchers and mortars stolen from local armouries, as well as converted civilian helicopters. 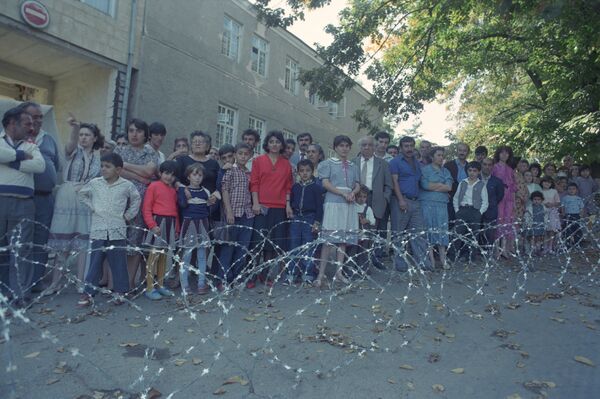 Moscow made a last-ditch attempt to restore order between April and August of 1991, when, in a special operation by the Soviet Army and Azerbaijani police, an effort was made to disarm Karabakh villages.

In May 1991, the US Senate added fuel to the fire by unanimously adopting a resolution condemning the ‘crimes of Soviet and Azerbaijani authorities’ against the Armenian population of Nagorno-Karabakh, Azerbaijan and Armenia.

After the failure of the August coup attempt against Gorbachev in Moscow in 1991, the center lost control of the situation in Karabakh entirely, with local authorities proclaiming the Nagorno-Karabakh Republic in September 1991. In November, Azerbaijan’s Supreme Soviet adopted a resolution to liquidate the NKAO’s autonomous status. 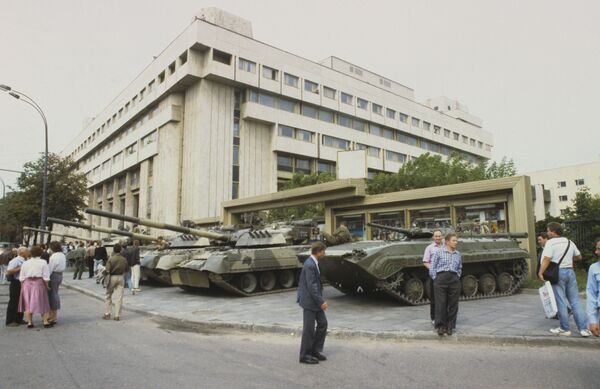 Tanks outside the RIA Novosti (and now Sputnik) news agency headquarters in Moscow, August 19, 1991, sent to the Soviet capital to try to oust Gorbachev and the Yeltsin government of the Russian Soviet Republic.
© Sputnik / Борис Бабанов
/
Go to the photo bank

The stage was set for full-scale war. Between 1992 and 1994, Armenian and Azerbaijani forces would wage a bloody campaign for control of Nagorno-Karabakh, with the conflict claiming the lives of over 30,000 troops and civilians from both sides. A shaky ceasefire was signed in 1994, but has been regularly broken over the 26 years since, most recently starting in late September 2020.