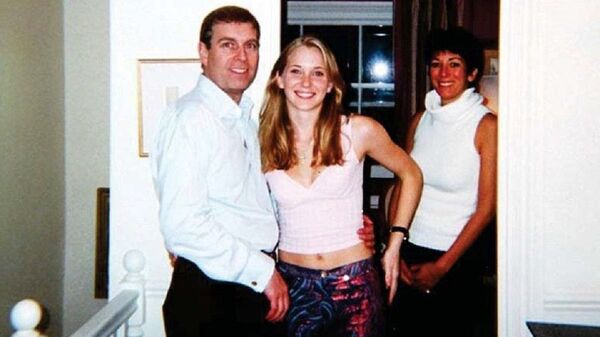 Aleksandra Serebriakova
Moscow-based Sputnik correspondent specializing in foreign affairs.
All materialsWrite to the author
An alleged sex victim of Jeffrey Epstein, Virginia Giuffre, maintains that she was forced by the late financier to have sex with Prince Andrew on at least three occasions between 2001 and 2002. The British royal strongly denied this claim or even being acquainted with the American woman.

Virginia Roberts, now Giuffre, decided to congratulate Her Majesty the Queen on her birthday in a peculiar way, by posting a viral photo of her 17-year-old self standing next to Prince Andrew with British socialite Ghislaine Maxwell in the background.

The pic was shared by Giuffre on her Twitter account, accompanied by a caustic caption “Happy Birthday Queen Elizabeth Here's my gift to you- just a memorable moment of your son.”

Happy Birthday Queen Elizabeth Here’s my gift to you- just a memorable moment of your son https://t.co/TkrhveK41D via @YouTube pic.twitter.com/iol7PZihvv

​The post also provided a link to Prince Andrew’s Newsnight interview during which he vehemently denied having sexual relationship with the woman or even meeting with her, despite the existence of a photo where they are pictured hugging each other and smiling at the camera.

The Queen was born on 21 April, but in the part of Australia where Giuffre is currently residing, her birthday is celebrated in the first week of October.

Giuffre’s tweet, however, did not see many “birthday” wishes to Her Majesty in response – but rather a flow of sarcastic comments.

Thank you! Most excellent roast.

He's convinced that man in the photo is someone who appears to be him and is not convinced that it is him. His mom's not happy with him. That photo just keeps giving.

In November, the Duke of York sat for an interview with the BBC which was later described by many as a “car-crash”. During the talk with Emily Maitlis, the royal “categorically” denied Giuffre’s claims that she had sexual relationship with him at least three times on the orders of her sex “masters” Epstein and Maxwell.

He also responded to one of Giuffre’s accusations by saying that he had spent the night at Pizza Express in Woking on the night she said they had sex. However, he could not recall them taking the photo together, suggesting instead that the pic could have been doctored.

Just a few days after the programme aired, Prince Andrew officially stepped down from his royal duties following the backlash his statements caused.