Armenian PM: US Needs to Explain If It Gave Turkey F-16s 'to Bomb Peaceful Villages' in Karabakh 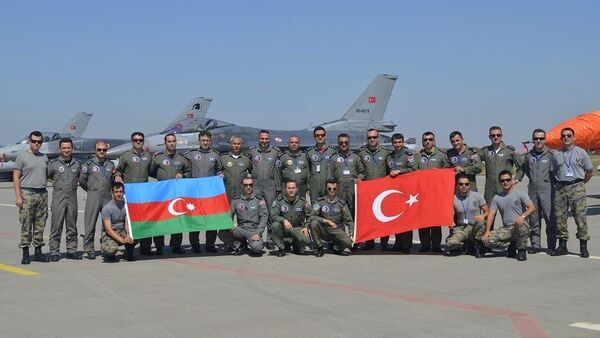 Ilya Tsukanov
All materialsWrite to the author
Yerevan has repeatedly accused Ankara of militarily supporting and even commanding Azerbaijani operations in the Nagorno-Karabakh conflict, and of redeploying jihadist militants from Syria and Libya to fight Karabakh's self-defence forces. Baku and Ankara have forcefully denied the allegations.

"The United States needs to explain whether it gave those F-16s to [Turkey to] bomb peaceful villages and peaceful populations", Pashinyan said, speaking to The New York Times about what he told O'Brien in a telephone call Thursday.

According to the prime minister, the national security adviser "heard and acknowledged" the Armenian side's concerns.

In his NYT interview, Pashinyan also reiterated allegations he's made elsewhere that the current flare-up of fighting for the contested Nagorno-Karabakh region has been "encouraged" by Turkey, calling the latest escalation "a continuation of the genocidal policies carried out by Turkey against Armenians", in reference to the Armenian Genocide at the beginning of the 20th century.

Calling the dispute between Armenians and Azerbaijanis in the South Caucasus exclave a "civilisational front line", Pashinyan suggested that the Armenian side was "the last remaining obstacle in the way of Turkish expansion toward the north, the south, and the east".

Yerevan has repeatedly accused Turkey of being heavily involved in the latest flare-up of fighting in the Karabakh conflict which began late last month, and which entered its eighth day on Monday.

Before that, both Armenia and France accused Ankara of using Syrian mercenaries in the conflict. Azerbaijani President Ilham Aliyev forcefully denied the latter claims in an address on Sunday, saying his country has a well-equipped army of 100,000 soldiers, and demanding an apology from Paris. Turkish authorities have similarly rejected both the "mercenary" and F-16 deployment claims.

Last week, Armenia also reported that one of its Su-25 close air support jets had been shot down by a Turkish F-16 fighter. Azerbaijan vocally denied the claims, calling the allegation a "fantasy of the Armenian military propaganda machine". Later, the Armenian Defence Ministry released an animated video purportedly showing a map of the patrolling Turkish F-16 over Azerbaijani airspace near the Su-25 before it was shot down.

Turkey is one of the few nations that has expressed support for Azerbaijan's offensive in Karabakh. While Russia, the United States, France, and the European Union have each asked both sides to agree to a ceasefire and to sit down for talks, Turkish President Recep Tayyip Erdogan has urged Baku to pursue the war to a victorious conclusion.

The Karabakh conflict's current phase has its roots in the late Soviet period. In Soviet days, Nagorno-Karabakh was an autonomous region of the Azerbaijani Soviet Socialist Republic populated mostly by ethnic Armenians. In the late 1980s, nationalist sentiments on both sides unchecked by perestroika and heightened by a deteriorating socio-economic situation prompted regional authorities to request to secede from Azerbaijan and join the Armenian republic of the USSR. Baku attempted to prevent this, and in 1991 abolished the region's autonomous status.

Erdogan Hopes Azerbaijan Will Continue Karabakh Offensive, 'Free' Region
Armenian-Azeri tensions over Karabakh poisoned interethnic relations between the two peoples across the region, with over 1.1 million Armenians and Azeris forced to flee their homes and communities due to the threat of pogroms, violence, and ethnic cleansing caused by the conflict. Between 1992 and 1994, Armenian militias backed by Yerevan and Azerbaijani troops waged a full-scale war in Nagorno-Karabakh, with the conflict leading to the deaths of over 40,000 troops, militiamen and civilians on both sides. A shaky ceasefire brokered by Moscow was signed in 1994, but it has been breached repeatedly by both sides since then, most recently starting on the morning of 27 September 2020.
Newsfeed
0
Access to the chat has been blocked for violating the rules . You will be able to participate again through:∞. If you do not agree with the blocking, please use the feedback form
The discussion is closed. You can participate in the discussion within 24 hours after the publication of the article.
To participate in the discussion
log in or register
loader
Chats
Заголовок открываемого материала