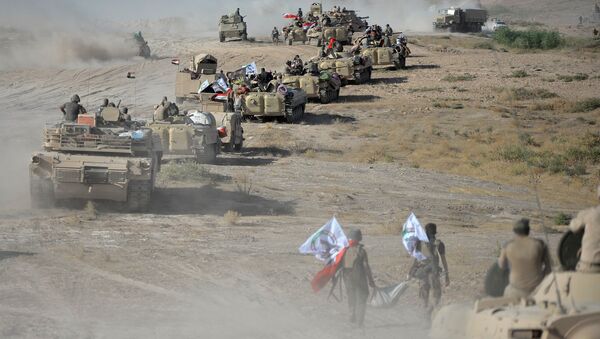 Ilya Tsukanov
All materialsWrite to the author
Over the past year-and-a-half, Iraq’s pro-government paramilitary forces have accused Israel of targeting them in air raids on multiple occasions. Tel Aviv has accused ‘Iranian-backed’ militias of using Iraq to ship weapons to Syria, but has declined to comment on whether or not it has carried out any operations inside Iraqi territory.

A Popular Mobilization Forces (PMF) militia unit was bombed by unidentified aircraft west of the town of Akashat, Iraq near the Iraqi-Syrian border, Arab media have reported, citing a security source in Iraq’s western Anbar Governorate.

According to the source, the attack took place shortly after midnight on Sunday morning, with the area struck multiple times. The source said the strikes caused material damage, but no loss of life or injuries.

In a related development, US military spokesman Wayne Marotto announced Sunday that US planes had conducted operations to “strike at the heart of Daesh [ISIS*],” in neighbouring Syria, where they reportedly destroyed “terrorist training camps in the remote Badiyah Desert.”

@CJTFOIR used airpower to strike at the heart of Daesh this morning, destroying their terrorist training camps in the remote Badiyah Desert, Syria. Working together, the Coalition and @cmoc_sdf remain the most capable force to stop Daesh from launching attacks in Syria and abroad

The spokesman did not clarify where exactly US strikes took place. The Badiyah Desert is spread over about 500,000 square kilometers of the Middle East, covering southeast Syria, most of Jordan, part of western Iraq and northern Saudi Arabia.

Unidentified aircraft and drones have repeatedly struck Iraqi militia positions over the past year-and-a-half or so, with militia leaders and lawmakers in Baghdad accusing Israel of culpability, and the US of acting as a co-conspirator due to its control of Iraqi airspace.

Israeli Prime Minister Benjamin Netanyahu hinted that his country may have conducted strikes on PMF ammunition depots in Iraq in August 2019, saying that Israel will act “in very many theatres” against Iran, “a state that seeks to annihilate us.” Formally, Israel has not admitted responsibility for carrying out strikes in Iraq since 1981, when its jets destroyed an Iraqi nuclear power plant southeast of Baghdad.

Netanyahu Not Ruling Out Preemptive Strike Against Iran
Iran has provided the PMF with logistical and advisory support for the war against Daesh between 2014-2017, and been accused by both Tel Aviv and Washington of using the group as a proxy for its regional operations. Tehran has denied these claims, and said its support was aimed at combating terrorism.

The US began withdrawing some of its 5,200 troops in Iraq in March amid an unceasing string of rocket attacks on fortified positions where its forces operate in the wake of the January assassination of a senior Iranian commander in Baghdad, which prompted Iraq’s parliament to pass a non-binding resolution demanding their departure. Late last month, US media reported that Washington had warned Baghdad that it would withdraw from its Embassy in the Iraqi capital unless Iraq managed to check attacks on American personnel.