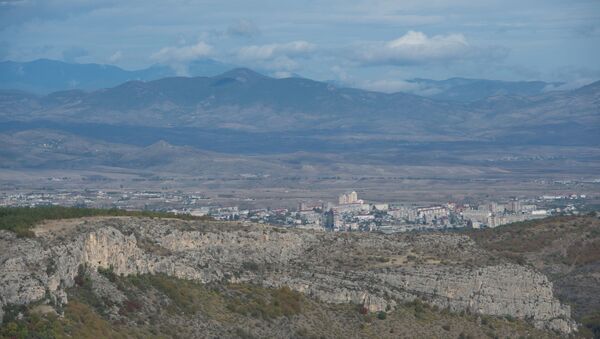 The decades old conflict between Armenia and Azerbaijan in the disputed Nagorno-Karabakh region sparked into life again at the end of last month.

The President of the unrecognized Republic of Artsakh (Republic of Nagorno-Karabakh) Arayik Harutyunyan says that his troops have improved their positions after heavy fighting on Saturday.

Armenia, Azerbaijan, and the breakaway republic of Nagorno-Karabakh have all reported dozens of casualties since the flare-up of hostilities.

The international community, including the co-chairs of the Organization for Security and Co-operation in Europe's Minsk Group – Russia, France, and the United States – have called on all parties in the conflict to agree to a ceasefire and begin peace talks.

MOSCOW (Sputnik) - The increase in civilian casualties amid the escalation of hostilities between Armenia and Azerbaijan in the disputed region of Nagorno-Karabakh is "unacceptable," the European Union's foreign policy chief Josep Borrell said on Sunday, adding that he has spoken to the foreign ministers of both countries over the weekend.

"Spoke to ministers of Armenia and Azerbaijan over the weekend. The increase of civilian casualties is unacceptable. Fighting should stop immediately," Borrell wrote on Twitter.

BAKU (Sputnik) - The Azerbaijani Prosecutor General's Office has said on Sunday evening that five people have been hospitalized after the city of Mingecevir was shelled amid the ongoing hostilities in the region.

"At 23:00 [19:00 GMT] on October 4, 2020, upon the order of the military-political leadership of Armenia, the armed forces of this country deliberately targeted the civilian population of the city of Mingecevir, with a population of more than 100,000 people, located more than 100 kilometers [62 miles] from the theater of military operations," the Prosecutor General's Office said in a statement.

According to prosecutors, three projectiles fell in the vicinity of the city. Two of them did not explode, but the third fell near a civilian residence, injuring five people, according to the statement.

"Two out of the three projectiles did not explode. One of the unexploded projectiles fell in front of the building of the Azerbaijan Thermal Power Plant. The other fell near a civilian residence. Five people suffered injuries and were hospitalized. The residence was seriously damaged," the ministry said.

Prosecutors are continuing their investigation and are clarifying the number of victims and the damages caused to civilian infrastructure.

YEREVAN (Sputnik) - The Armenian Ministry of Defense has denied claims from Baku that the Armenian armed forces launched a shelling attack on the Azerbaijani city of Mingecevir, ministry representative Shushan Stepanyan said on Sunday.

Multiple people have been injured after the Armenian armed forces began shelling the Azerbaijani city of Mingecevir, where the country's largest water reservoir and hydroelectric power station are located, the Azerbaijani Ministry of Defence said on Sunday.

"The cities of Mingecevir and Terter were hit by rockets from the Armenian armed forces. There are wounded people," the ministry said in a statement.

Azerbaijani presidential aide Hikmet Hajiyev has also confirmed the targeting of Mingecevir, writing on Twitter that the attack had been launched only recently.

Azerbaijan's President Says Will Agree to Ceasefire If Armenia Vows to Withdraw Troops From Karabakh
14:42 GMT 04.10.2020

The airport of Azerbaijan’s second-largest city of Ganja was beyond the reach of recent shelling by Armenian forces, director Beyler Najafov told reporters on Sunday.

"Today, I have been at work since 7 a.m., and there was no shelling. The shelling in the city was heard, but the territory of the airport was not affected," Najafov said.

According to executive, the airport halted regular flights back in March due to the pandemic. He also noted that the airport housed no military aircraft.

The Azerbaijani armed forces have "liberated" the town of Jabrayil, which is located on the contact line with the breakaway republic of Nagorno-Karabakh, President Ilham Aliyev said on Sunday.

"Today, the Azerbaijani army has liberated the town of Jabrayil and a number of villages," Aliyev wrote on Twitter.

The leader of the unrecognized Republic of Nagorno-Karabakh, Arayik Harutyunyan, is "alive and well," his spokesman told Sputnik on Sunday, rejecting Baku’s claims to the contrary.

Earlier in the day, Azerbaijan’s presidential aide Hikmet Hajiyev claimed that Harutyunyan had been severely injured "as a result of a precise strike by our army." He threatened "similar fate" to "other separatists."

"This is absolute disinformation. The president is alive and well, is efficiently fulfilling his duties and has just delivered a video address. We understand that the president's reasonable decisions cause panic in Azerbaijan, but we must disappoint them," Vahram Poghosyan said.

The Azerbaijani Prosecutor General's Office told Sputnik on Sunday that 24 civilians had been killed and 111 others were injured as a result of clashes at the line of contact in the breakaway republic of Nagorno-Karabakh.

Additionally, one person died and 32 others were injured during shelling of the Azerbaijani city of Ganja by the Armenian armed forces, the prosecutors said in an update from the one death and four injured reported earlier in the day.

"Today, on October 4, 2020 .., the city of Ganja, the second largest city of the Republic of Azerbaijan, with a population of more than 500,000, was subjected to rocket fire. ... A resident of the city of Ganja was killed, 32 more people received various injuries. ... Significant damage has been inflicted on the city's infrastructure, residential buildings," Kamran Aliyev, the Azerbaijani prosecutor general, said in a statement.

Two more explosions were heard in the capital of Nagorno-Karabakh - Stepanakert, a Sputnik correspondent reports.

People took shelter in their basements.

Konstantin Kosachev, the head of the Russian upper house's foreign affairs committee, told Sputnik on Sunday that the issue of sending peacekeepers to the Nagorno-Karabakh conflict zone must be discussed within the framework of the Organization for Security and Co-operation in Europe (OSCE) Minsk Group and requires shared interest of all parties to the conflict.

"Peacekeepers are effective only when all parties to the conflict are interested in their presence. This is the first thing. We need a clearly expressed wish on all sides," Kosachev said.

Secondly, he noted, peacekeepers should not represent just one country.

"Therefore, it is necessary to discuss such a mandate within the framework of the Minsk Group, and if necessary, the entire OSCE," Kosachev concluded.

An electrical substation in Stepanakert, the capital of the unrecognized Nagorno-Karabakh Republic, caught fire on Sunday amid ongoing shelling of the city, a Sputnik correspondent reported.

Residential buildings have also been damaged. Local residents are hiding in basements, and some are trying to flee the city.

The city is experiencing power and Internet outages.

The Turkish Foreign Ministry branded Sunday's shelling in the Azerbaijani city of Ganja a violation of the Geneva Convention's code on the conduct of warring sides.

"Today's attacks by Armenia on the civilian population in Ganja, the second-largest city in Azerbaijan, are a new manifestation of Armenia's unlawful position. We condemn these attacks. Facing defeat in the occupied Azerbaijani territories, Armenia violates all principles of humanitarian law, primarily the Geneva Conventions, and attacks civilian settlements outside the territories that are a conflict zone because of the occupation," the Turkish Foreign Ministry said in a statement.

The statement went on to say that Armenia remains the biggest obstacle to peace in the region.

The document also said that Ankara supports the position of Azerbaijan, which "despite the provocations of Armenia, uses the right to self-defense based on international law within its internationally recognized borders and makes every effort not to harm the civilian population."

The leaders of Russia, France and the United States — the co-chairs of the Organization for Security and Co-operation in Europe’s Minsk Group for the resolution of the Nagorno-Karabakh conflict — have called for a cessation of hostilities and a return to dialogue without pre-conditions.

"At the center of the conversation was the conflict between Azerbaijan and Armenia in Nagorno-Karabakh again. The Chancellor expressed concern about the ongoing clashes and the growing number of victims. She stressed that all parties must immediately stop clashes and start negotiations. She fully supported the statement of the Minsk Group co-chairs (France, Russia , USA) from October 1,” Demmer said.

Merkel also spoke in favor of a ceasefire on humanitarian ground, so as to provide assistance to the soldiers engaged in the conflict on the ground in exceedingly harsh conditions.

One civilian has died and four others were wounded in the Azerbaijani city of Ganja as a result of Armenian shelling, the country’s Foreign Ministry said Sunday.

“1 civilian killed and 4 injured as the result of the missile strike by the #Armenia/n army on dense residential areas of #Ganja, the 2nd largest city of #Azerbaijan, 60 km away from the Armenian border. Evidence of heavy damage to the city,” the ministry said in a post on Twitter with photographs of a destroyed building.

The Armenian Defence Ministry denied on Sunday that rocket attacks on Azerbaijani cities were coming from Armenia.

"The Ministry of Defence of the Republic of #Armenia formally declares that no fire of any kind is being opened from the territory of Armenia in the #Azerbaijan’s direction," spokeswoman Shushan Stepanyan wrote on Facebook.

The Azerbaijani Defence Ministry said on Sunday that its city of Ganja has come under fire by the Armenian military.

It added that the Azerbaijani cities of Terter and Horadiz were also shelled by the Armenian army.

"Currently, the Armenian armed forces are inflicting rocket strikes on the Terter city and Horadiz city of the Fizuli region from the territory of Khankendi. The Azerbaijan Army is taking adequate retaliatory measures against the enemy," the ministry told Sputnik.

In response to the shelling of the capital of Stepanakert, the Defence Army of Nagorno-Karabakh has attacked military facilities in Azerbaijan and destroyed a military airfield in the city of Ganja, the spokesman for the president of the unrecognized republic said on Sunday.

"The military airfield in Ganja was the first to be blown up," Vahram Poghosyan wrote on Facebook.

He noted that the Defence Army had targeted military facilities in major Azerbaijani cities following the shelling of Stepanakert. The spokesman called on the population to evacuate from these cities.

Arayik Harutyunyan, the president of the unrecognized Republic of Artsakh (Republic of Nagorno-Karabakh), said on Sunday that he had just returned from the front line where fighting with neighboring Azerbaijan over the disputed land continues.

"I am just back from the frontline. I have been in various sections - inspiration, feats, and heroism are abundant everywhere. Our victory is indivertible, as the behavior of our defenders is an exemplary manifestation of the collective strength and everlasting nature of our nation," Harutynyan wrote on Facebook.

The leader of the breakaway republic also expressed his gratitude to the army and the command staff for their professionalism.

In the meantime, the Karabakh Foreign Ministry said on Sunday that the Azerbaijani forces continued the shelling of Stepanakert.

"The Azerbaijani Armed Forces are firing rockets at Stepanakert," the ministry wrote on Telegram.

Armenian Defenсe Ministry spokesman Artsrun Hovhannisyan has also confirmed that Baku was shelling civilian targets in the capital of the unrecognized republic.

"At this moment civilian objects are being targeted again in Stepanakert," Hovhannisyan wrote on Facebook.

According to a Saturday statement from Armenia’s government, Pashinyan told Merkel that Turkish servicemen have been sent to Azerbaijan and to Nagorno-Karabakh. This was the second phone conversation that Armenia’s prime minister had with Merkel over the past few days.

The German chancellor stressed the need to cease hostilities in Nagorno-Karabakh and to resume the peace process.

Air raid sirens went off in the capital of the unrecognized Republic of Artsakh (Republic of Nagorno-Karabakh) on Sunday morning, a Sputnik correspondent reports.

Witnesses said that they had heard several explosions from artillery shells outside Stepanakert.

During the night, there was no shelling, the Sputnik correspondent said.

President of the unrecognized Republic of Nagorno-Karabakh Arayik Harutyunyan wrote on Facebook on Saturday that the republic’s troops had improved their positions after heavy fighting during the day.